Ebenezer Hazard (1744-1817) was a businessman and amateur historian whose public life was tied in with the post office. In 1775 he was appointed deputy postmaster of New York City. Hazard advanced in his job and was named to the position of Surveyor General of the Constitutional Post Office in 1776, a role he still held when this letter was written. Shortly thereafter, in 1782, Hazard rose again, this time to the position of Postmaster General.

As Surveyor General, Hazard was responsible for maintaining or improving the efficiency of the postal system by monitoring and altering postal routes when necessary. During the war, since an overwhelming majority of the post was franked military correspondence, Hazard’s position required him to follow the Continental Army in order to facilitate efficiency in the postal routes. In November 1776, Hazard wrote to Congress asking for more money given the hardships he encountered on the job. Unable to secure a horse, he followed the army on foot with his postal sack carried by a servant.

In this letter, Hazard writes to Dudley Woodbridge, Postmaster of Norwich, Connecticut explaining new postal rates, which had doubled as the result of a “late resolution of Congress” from February 24, 1781. Beginning in October 1777, postal rates varied wildly, increasing as much as 20 times the 1775 rates by the end of 1779. These high rates remained in effect until December 1780 when they decreased dramatically to half the 1775 levels and were subsequently adjusted – increasing to twice the 1775 rates in February 1781 to cover operating costs – finally standardizing in 1787.

Hazard used his franking privilege to send this letter from Plymouth, Massachusetts.

Cover for Letter from Ebenezer Hazard to Dudley Woodbridge, 1781 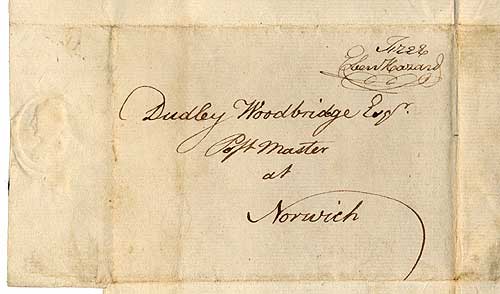 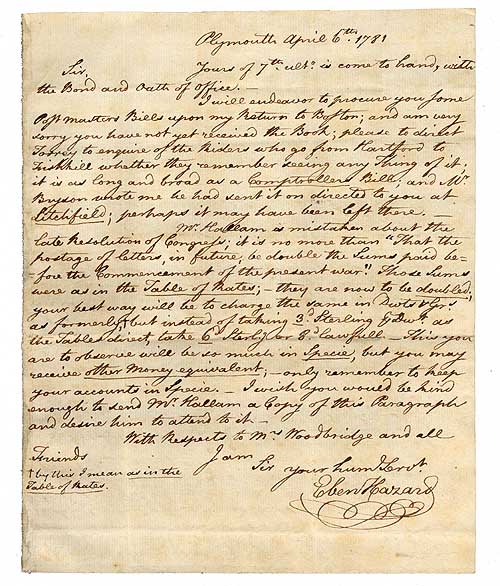 Sir,
Yours of 7th ulto. is come to hand, with
the Bond and Oath of office.—
I will endeavor to procure you some
Post Masters Bills* upon my Return to Boston; and am very
sorry you have not yet received the Book; please to direct
Torrey to enquire of the Riders who go from Hartford to
Fishkill whether they remember seeing any Thing of it;
it is as long and broad as a Comptrollers Bill; and Mr.
Bryson wrote me he had sent it on directed to you at
Litchfield; perhaps it may have been left there. —
Mr. Hallam is mistaken about the
late Resolution of Congress; it is no more than “That the
postage of letters, in future, be double the Sums paid be =
fore the Commencement of the present war.” Those Sums
were as in the Table of Rates; - they are now to be doubled;
your best way will be to charge the same in Dwts & Grs.
as formerly, † but instead of taking 3d .Sterling [] Dwt. as
the Tables direct, take 6d Sterl.g or 8.d lawfull**. _This you
are to observe will be so much in Specie***, but you may
receive other Money equivalent; —only remember to keep
your accounts in Specie. _ I wish you would be kind
enough to send Mr. Hallam a Copy of this Paragraph
and desire him to attend to it.—
With Respects to Mrs. Woodbridge and all
Friends
I am
Sir your huml Serv.t
Eben Hazard
† by this I mean as in the
Table of Rates.

*Post Masters Bills: Postmasters were responsible for listing letters according to their destinations. These lists were written up and sent with the post riders so that they might be checked against the contents of the mail pouches upon receipt. Larger post offices would arrange these lists by postal rates while smaller offices did not require such a high level of organization. Regardless, pre-printed postmaster’s bills saved time and confusion in noting down letters and postal rates.

**lawfull: A monetary system similar in organization to the British pound, but not quite as valuable.

***in Specie: in Specie literally means “in actual form,” i.e., coin and not paper money.

‹ To Pay or Not to Pay? up Dudley Woodbridge ›
Back to Top