Ezekiel Williams (1729-1818) was a successful merchant from Wethersfield, Connecticut and an extremely energetic public servant. A contemporary account observes that “[h]is zeal was boiling.” Williams was a captain in the Continental Army in 1761, sheriff of Hartford County, Connecticut from 1767 to 1789 and a member of the Committee of the Pay Table for Connecticut beginning in 1775. This letter was written by Williams when he was U.S. Deputy Commissary of Prisoners* for Connecticut.

Williams’ letter is a frantic appeal to Oliver Wolcott, a member of the Committee of the Pay Table in Connecticut** for help in settling his financial affairs. Williams describes his arrival in New York City (then the capital of the United States), the difficulty he encountered there and his current situation that forced him to remain in New York until his business was successfully concluded. Williams keenly felt the separation from his family, which was quite large – 11 children and 50 grandchildren. This sentiment provides a glimpse of a man known for his affection, hospitality and fatherly dedication.

Although Williams was not authorized to frank this letter, he evaded the need for postage another way. The message on the cover provides detailed delivery instructions to Mr. Curly, a post rider, whom Williams engaged to carry his letter “by favor.” Williams left his letter open and unsealed so that it would not have to be placed into the official mails and could instead be carried to Wolcott in Hartford, Connecticut.

Cover for Letter from Ezekiel Williams to Oliver Wolcott, 1785 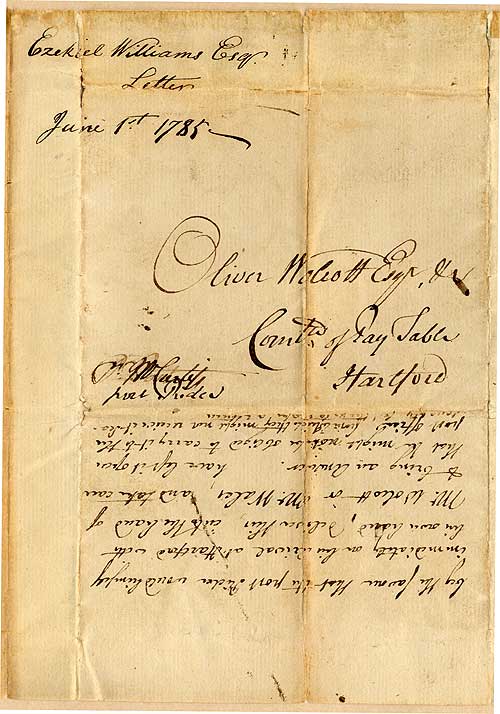 by the favour that the post Rider would himself
immediately on his arrival at Hartford with
his own hand, deliver this into the hand of
Mr. Wolcott or Mr. Wales, and take care
to bring an Answer. have left it open
that he might not be obliged to carry it to the
post office from which they might not receive it sea–
[indistinguishable] them to [make] a return 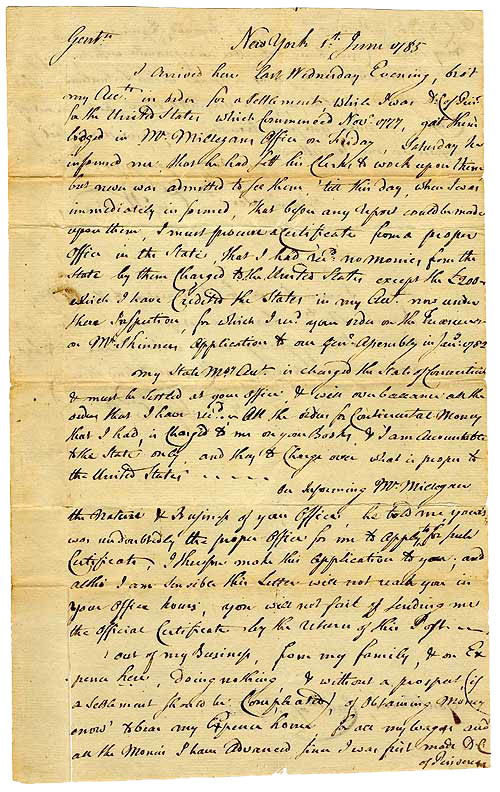 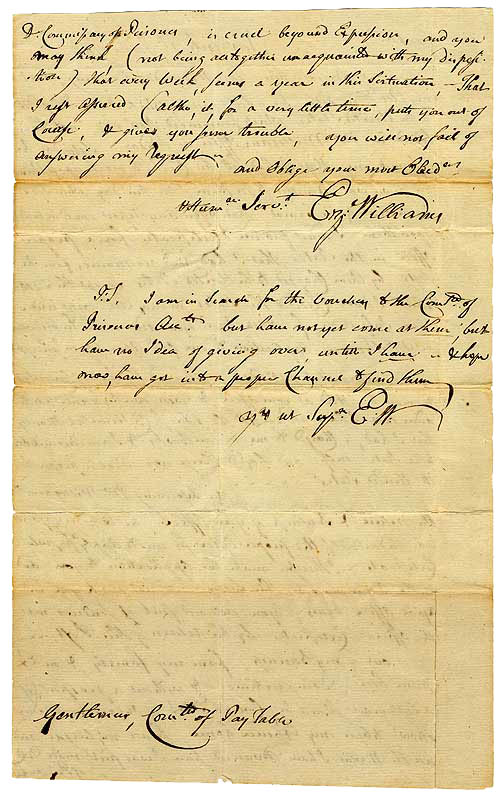 I arrived here last Wednesday Evening, bro’t
my Accts in order for a Settlement, while I was D:C. of Prisr.
for the United States which Commenced Nov.r 1777, got them
lodged in Mr. Millegans Office on Friday, Saturday he
informed me that he had sett his Clerks to work upon them
but never was admitted to see them ’till this day, when I was
immediately informed, That before any Report could be made
upon them, I must procure a Certificate from a proper
Office in the State, That I had recd. no monies from the
State by them Charged to the United States except the £200 –
which I have Credited the States in my Acct. now under
there Inspection, for which I recd. your order on the [treasurer]
on Mr. Skinners Application to our Gen.l Assembly in Jany: 1782.
My State Msy Acct. is charged the State of Connecticut
& must be Settled at your office & will over ballance all the
orders that I have rec’d. ~ All the orders for Continental Money
that I had, is Charged to me on your Books, & I am Accountable
to the State only, and they to Charge over what is proper to
the United States …..
On Informing Mr. Millegan
the Nature & Business of your Office, he told me yours
was undoubtedly the proper Office for me to Apply ^to for such
Certificate, I therefore make this Application to you; and
altho’ I am Sensible this Letter will not reach you in
your Office hours, you will not fail of sending me
the Official Certificate by the return of this Post ~.
Out of my Business, from my Family, and & on Ex
pence here, doing nothing, & without a prospect, (if
a Settlement should be Compleated), of obtaining Money
enou’ to bear my Expence home, for all my wages and
all the Monies I have advanced since I was first made D.C:
of Prisoners
D: Commisary of Prisoners, is cruel beyond Expression, and you
may think, (not being altogether unacquainted with my dispos -
ition) that every week seems a year in this Situation, —That
I rest assured (altho’, it, for a very little time, puts you out of
Course, and & gives you some trouble, you will not fail of
answering my request
and Oblige your most Obeden
& Humle Servt: Ez: Williams

P.S. I am in search for the Vouchers to the Comtlr of
Prisoners Acc.ts but have not yet come at them, but
have no Idea of giving over untill I have- & hope
now, have got into a proper Channel [to] find them