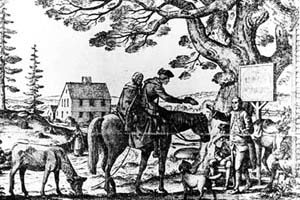 As Surveyor of the Post Offices and Post Roads on the Continent of North America, Hugh Finlay (1731-1801) set out in September, 1773 on a journey through Canada and the 13 colonies in order to assess the overall state of the mail system in order to improve the efficiency of the mails. His journal serves as a record of his painstaking 310 mile journey.

What Finlay discovered was a surprising number of people sending their letters “out of the mails” with private carriers, avoiding the payment of postage in the British-run system. Although Finlay disapproved of this practice, he acknowledged that it would be difficult to halt due, in part, to growing anti-British sentiment. Thanks to William Goddard’s Constitutional Post, which had begun in 1774, some colonists saw payment of postage as a version of taxation without consent.

Finlay’s expedition came to an end in June 1774 when growing unrest in the northern colonies made the job of surveying the roads hazardous and, in some cases, impossible. In addition, he had been appointed Postmaster General of the Colonies in February 1774 following Ben Franklin’s dismissal from that position. However, the appointment would not last long. Increasing competition from the Constitutional Post caused the British Post Office in America to close forever by Christmas 1775.

One Stavers some years ago began to drive a stage coach between Portsmouth and Boston: his drivers hurt the office very much by carrying letters, and they were so artful that the postmaster could not detect them; it was therefore judged proper to take this man into the pay of the office....

Mr. Russel says that the drivers cannot be detected, they have small sham bundles with each letter or they are given to the Passsengers in the coach, who will without hesitation say that they are letters of recommendation which they carry.

His son drives the coach, he was called in before me, and I gave him a severe reprimand laying before him the consequences of his want of care, and shewing him that if ever he did attempt to defraud the office by receiving money for carrying letters, and afterwards concealing it without accounting to the Post Office, he wou'd be severely punished.

[Mr. Vernon] is of the opinion that much time is lost by Peter Mumford between New Port and Boston. He says that theres two Post offices in New Port, the King's and Mumford's, and that the revenue of the last is the greatest. It is the same in Boston, both Mumford and the ride of the upper Stages (Hyde) receive much postage for which they do not account. It is common for people who expect letters by Post finding none at the Post office to say "well there must be letters, we'll find them at Mumford's." It is next to impossible to put a stop to this practice in the present universal oppostion to everything connected with Great Britain. Were any Deputy Post master to do his duty, and make a stir in such matter, he would draw on himself the odium of his neighbours and be mark'd as the friend of Slavery and oppression and a declared enemy to America.

The whole income of his office goes to pay the rider Benjamin Mumford between Saybrook and New Port, a distance of 60 miles, with five ferrys, on the whole the most difficult and dangerous as any in America; the road without exception the worst, for which service he is paid £55 Str. [per year]; --he says that the number of horses he hurts thro' the badness of the roads runs away with all his profit, and that as there's no manner of perquisite for a rider between Saybrook and New Port, his wages are too small to provide him in horses and maintain his family. I firmly believe it.

It is the custom on every stage that I have surveyed, for the Post rider to execute commissions on the road---I have been informed that Peter Mumford the rider between Newport and Boston makes above £100 Str. yearly of his employment over and above his wages from the Post office.

[Mr. Kilby] says that if every vessel arriving at this port were to send her letters to the office the income wou'd be doubled and the revenue increas'd in other parts; but when he sends to the Ship Masters, they insult and threaten his messengers; the Custom House officers tho' directed by Act of Parliament to admit no vessel to entry without the Post Masters certiticate, take no notice of the act.

...He complains much of the Post riders; he begs that the complaints may not appear to have come from him, because the riders being of serevice to the people on the road have many friends in the country as well as in town, and the name of informer (which his official representations would incur from his neighbors) wou'd hurt him in his business, but in conscience he looks on himself as obligated to represent the following matters:

"That the riders come loaded with bundles, packages, boxes, canisters, &c---every package has a letter affixed to it, which the rider claims as his own property and perquisite; nay sometimes a small bundle of chips, straw or old paper accompanys a seal'd packet or large letter, and the riders insist that such letters are exempted from postage."

The riders have told Mr. Kilby that the Devil might ride for them if these way letters and packets were to be taken from them....

The riders sometimes inadvertently put letters into the office which they wish to conceal, not a great while since there was one put into the office by the rider mark'd postage paid. Mr. Belding demanded the money of him for the letter, but he obstinately refus'd to pay it, insisting that all letters he cou'd pick up between any two offices were of right his perquisite.

...the present act obliging Masters of Vessels to carry their letters to the Post office is of no effect in America, they have no inclination to pay obedience to any revenue act, and a t present they say that if they are obliged to put letters into the Post office they must pay for them before they can get them out again, and this is one mode of taking money from them without their consent, therefor they will pay as little regard to that law as is possible to be done, and it can easily be evaded, since the Master has only to say: Every letter I have on board concerns my cargo, and therefore I shall not deliver one of them at the Post office.

Mr Thomson reports that many people of whom better things might be expected, rather than send their letters in the Mail, will send for the rider and make a private bargain with him to carry their dispatches; the riders are but too apt to secret letters for their own emolument.