To Pay or Not to Pay?

After the war was over and the Constitutional Post established, Americans continued to bargain with post riders and have friends carry their letters out of the mails. These practices in part caused the young postal system to amass an exceptional $40,000 debt by 1779 and led to rapid increases in postal rates, doubling the standard rates in 1779 and again in 1781.

The first letter below was franked and sent through official mail channels while the second was sent “by favor” of a post rider named Mr. Curly. In Ebenezer Hazard’s letter to Postmaster Dudley Woodbridge, he describes the newly raised postal rates. Pricing was made more difficult because there were many different types of money in circulation – local and national bills as well as currency in the troy system of mass. The expense of sending a letter coupled with his own financial situation may have prompted Ezekiel Williams to send his appeal to Oliver Wolcott and the Connecticut Pay Table out of the mails.

Even though the war was over, postal officials were eager to prepare the new system in case of further conflict. In this letter (see the letter and transcript below), the writer, RMC, reports to the General Post Office in Washington, DC, on the condition of certain postal routes and the frequency of letters carried out of the mails. He advises that the routes be kept active as they would prove useful in the event of war. Writing in January 1808, RMC's advice was well-considered. On June 18, 1812, America declared war on Great Britain to begin the War of 1812.

Learn how to fold a colonial-style letter and decide whether you want your own writing sent out of the mails! 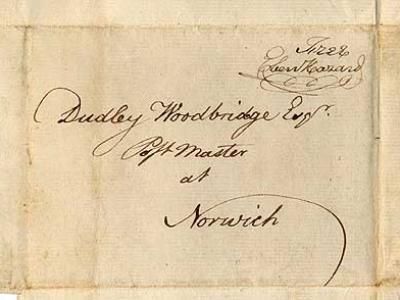 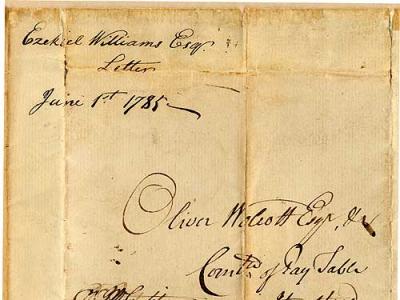 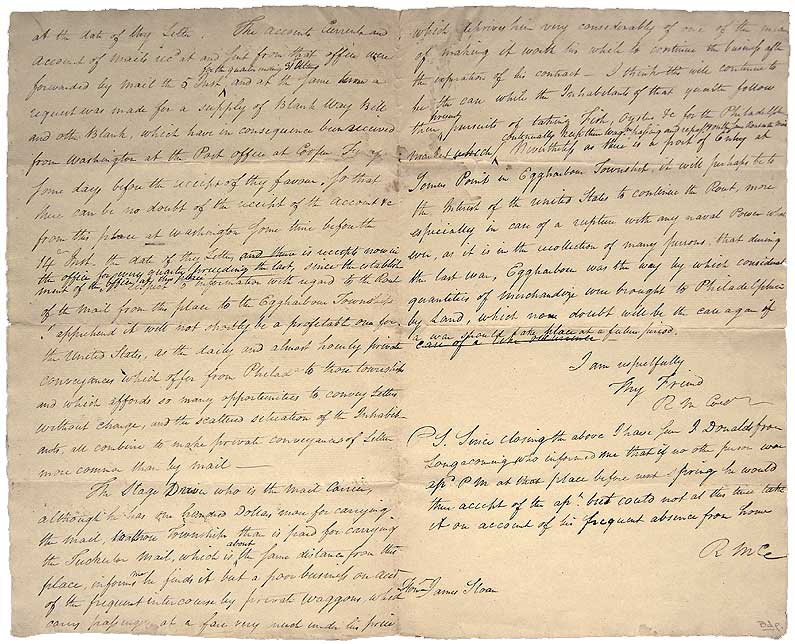 Coopers Ferry Janu. 28 . 1808
Respected friend
I received thine of the 14 Inst and note the contents
As there has been some change in the post office in ^one of the Eggharbor
Townships, vizt. dropping the post office at Baegain Town
and establishing one at Abssom, at the latter place there
has yet been but little business done--- The mail
carrier informs me that there is scarcely a Letter mailed there
or one left for delivery, but little as it is, it was the duty
^ of the P.M. to have forwarded his accounts &c Joseph Sharp Esq. is the
post master at that office, but the business is done by a Deputy.
William Erwin is the post master at Weymouth, Post
Office which is on the rout, a person fully competent for
the office, and I apprehend has forwarded his account before
this will reach Washington---
John Donalds of Longacoming I heard was
appointed P. Master at that place some time since, but I
have understood he declines accepting the appointment
and the Letter directed for Lonacoming are taken out of the
Mail at the post office at Haddorfield of course it
is considered that there is no post office at Lonacoming.
I cannot account for the reason that Joseph
Reynolds P.M. at Haddorfield has not forwarded
his account for I believe he is at home and in health.
There is I apprehend some misconception in regard
to the information ^obtained respecting there being no return receive
at Washington from the Post Office at Coopers Ferry
at the date of My Letter. The accounts current and
account of mails recd at and sent from that office were
forwarded by mail the 5 Inst ^ for the quarter ending 31st ultimo and at the same time a
request was made for a supply of Blank Way Bill
and other Blank, which have in consequence been received
from Washington at the Post Office at Coopers Ferry
some days before the receipt of thy favour. so that
there can be no doubt of the receipt of the account &c.
from this place at Washington some time before the
14th Inst. the date of thy Letter and there is receipts now in
the office for every quarter preceding the last, since the establish-
ment of the office at this place.
In respect to information with regard to the Route
of the mail from this place to the Egghorbour Townships
I apprehend it will not shortly be a profitable one for
the United States, as the daily and almost hourly private
conveyances which offer from Philada to those townships
and which affords so many opportunities to convey Letters
without charge, and the scattered situation of the Inhabit-
ants, all combine to make private conveyance of Letters
more common than by mail---
The Stage Driver who is the mail Carrier,
although he has one hundred Dollars more for carrying
the mail, to thos Townships than is paid for carrying
the Tuckulos mail, which is ^about the same distance from this
place, informed ^me he finds it but a poor business on acct
of the frequent intercourse by private waggons, which
carry packages at a fare very much under his price
which deprives him very considerably of one of the []
of making it worth his while to continue the business after
the expiration of his contract--- I think this will continue to
be the case while the Inhabitants of that quarter follow
their ^present pursuits of taking Fish, Oysters, &c. for the Philadelphia
market which ^continually keeps their wag.ns passing and repassing on the same Route as the Mail
Nevertheless as there is a port of Entry at
Townes Point in Egghorbour Township, it will perhaps be to
the Interest of the United States to continue the Rout, more
especially in case of a reupture with any naval Power what
ever, as it is in the recollection of many persons, that during
the last war, Eggharbour was the way by which considerable
quantities of merchandise were brought to Philadelphia
by Land, which no doubt will be the case again if
a war should take place at a future period.

I am respectfully
Thy Friend
R.M.C.[]

P.S. Since closing the above I have seen J. Donalds from
Longacoming who informed me that if no other person was
apd PM at that place before next spring he would
then accept of the apt. but could not at this time take
it on account of his frequent absence from home

‹ Quartermaster Department up Hazard Letter, 1781 ›
Back to Top