In 1967, issues of some U.S. stamps were printed in gravure, also known as “photogravure” or “photo-engraving.” The Bureau of Engraving and Printing began printing stamps on its own gravure press in 1971.

In modern gravure, the original stamp design is first scanned or photographed. That image is then separated into layers of cyan, magenta, yellow, and black, as well as any special inks, such as metallic silver. Each color layer is also divided into fine dots. Within the color layer, the image is then repeatedly copied to form a full stamp sheet. The dots making up each color layer are etched into the plate for that color of ink.

During printing, ink fills in these etched holes, which may be shallow or deep depending on the intensity of the color. The press then applies the stamp paper to each plate in turn, reassembling the separate color layers.

Full-color processes like gravure make it possible to print color souvenir sheets with extensive illustrated “selvage” (the area outside the stamps), like the Apollo 8 photograph used as a backdrop for the 1994 29¢ Moon Landing stamps.

In modern gravure printing, the stamp design is separated into at least four color layers—cyan, magenta, yellow, and black. As shown in this simplified diagram, a different plate of recessed dots is produced for each color layer. Each ink is applied separately to the plate for that color.

1. The original design is scanned and separated into color layers.

2-5. Separate plates—one for each color—are etched with dots, which are then filled with the appropriate ink.

6. Paper is applied to each plate in turn, combining the colored dots into a single image. 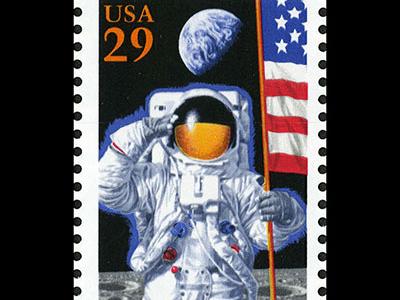