Holography: Into the Future

In July 2000, the Postal Service hosted World Stamp Expo 2000, its second international philatelic show, in Anaheim, California. The Expo was marked by a series of spectacular new U.S. stamps. On the opening day, the Postal Service issued the first U.S. holographic stamp—which was also the first U.S. stamp with a circular shape. On each of the next four days, another stamp or group of stamps was issued, including three more holographic stamps and the first U.S. pentagonal stamps. 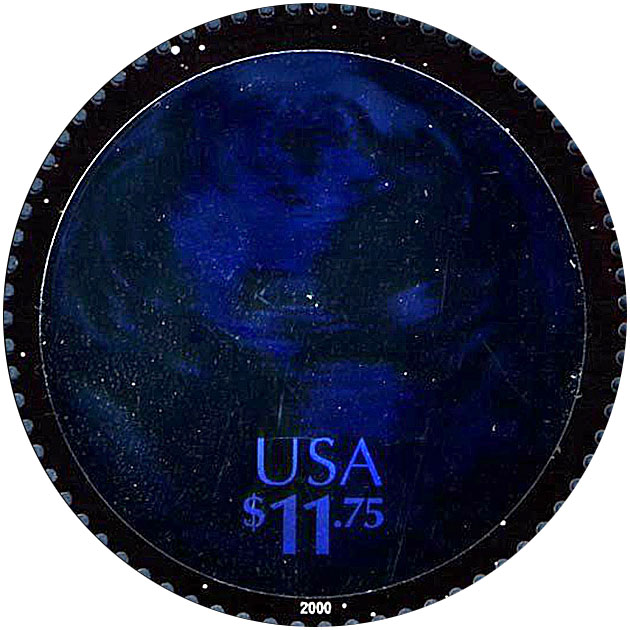 Holography, invented in 1960, is a method for creating two-dimensional images with a three-dimensional appearance. It has been used as a security feature on everything from credit cards to merchandise. In 1989, the U.S. Postal Service became the first in the world to incorporate holograms as indicia on stamped postal envelopes.

For now, holography remains best-suited for high-value, commemorative stamps like those issued at the Expo. The diagram shown here illustrates one way to create holographic images, using three-dimensional models. Other holograms, like the circular Expo 2000 Earth stamp, are created by software alone.

One way to produce a hologram is with a three-dimensional model. As shown in this simplified diagram, the imaging system splits a laser beam—a highly focused source of light—in two. One beam reflects off the object onto a film, causing a very slight delay; the other beam strikes the same section of film directly. The interference pattern between the two beams creates a holographic image.

Models were commissioned for three of the World Stamp Expo 2000 stamps, each the exact size of the desired image. The models of the lunar lander and of the astronaut scene were successfully used to make holograms. But the thin panels on the full space station model could not be captured holographically. The hologram for that stamp was produced digitally instead.