Stamps That Never Were

The colorful stamp portraits displayed here were originally developed for the 200th anniversary of US postal service in 1975. The concept was to commemorate famous Americans who once worked for the U.S. Post Office Department. The mix included Benjamin Franklin, the first Postmaster General, as well as more unexpected choices like football coach Knute Rockne, Nobel laureate and author William Faulkner, and Dr. Charles Drew, whose discoveries made blood banks and widespread blood transfusion possible.

The difficulty of making a final selection probably prompted postal officials to set the project aside very late in its evolution. In the end, entirely different stamps on an entirely different theme—the evolution of mail transportation methods over 200 years—were issued instead. The portrait designs bear no resemblance to the finished issues, and nothing similar was ever taken to finished stamps. 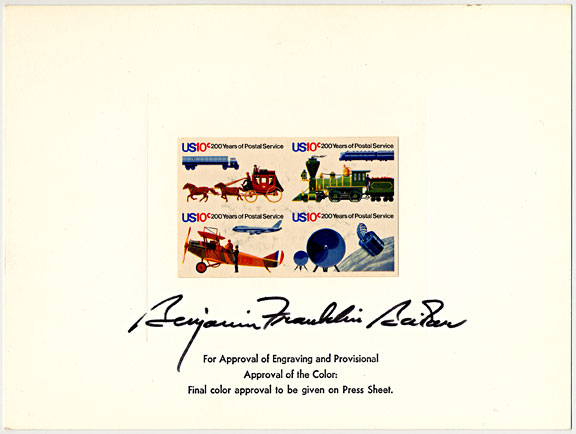 The actual designs for the Postal Bicentennial stamps, seen here in a die proof signed by Postmaster General Benjamin Franklin Bailar, bear no resemblance to the original “postal people” idea. Instead, they trace the evolution of mail transportation from stagecoach to satellite. (Satellites were first used to transmit Mailgrams—telegrams delivered by U.S. mail carriers—in 1974.) The Curtiss “Jenny” airmail plane with tail number 38278 was flown by Lieutenant Torrey Webb on the first day of regular U.S. mail delivery, May 15, 1918.

‹ High-Value Panes up U.S. Air and Space Stamp Gallery ›
Back to Top