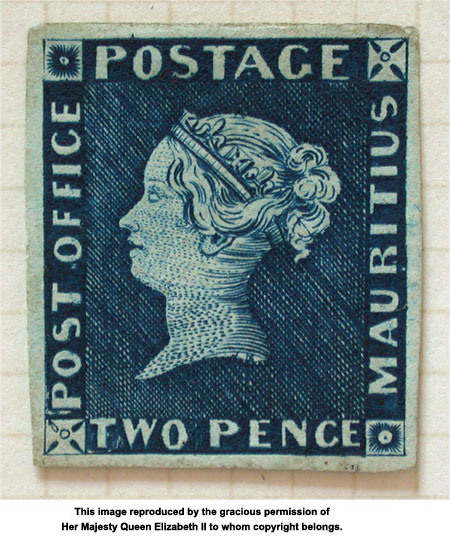 Two Pence 1847 Mauritius, unused
An unused Two Pence Post Office Mauritius, widely regarded as the finest unused example (of four) to have survived. It is looked upon as the best stamp in the Royal Philatelic Collection. The Post Office Mauritius stamps were the first official issue of postage stamps by a British Colony, and are so called because they bear the words "Post Office" rather than "Postage Paid."

Many rarities were added to the Royal Philatelic Collection by its founder, King George V, the "Collector King," and a cross section of these marvels is included in the exhibition. King George V was an enthusiastic and astute collector. He recognized rarity and made every effort to obtain the best examples of the rarest stamps at the first opportunity. 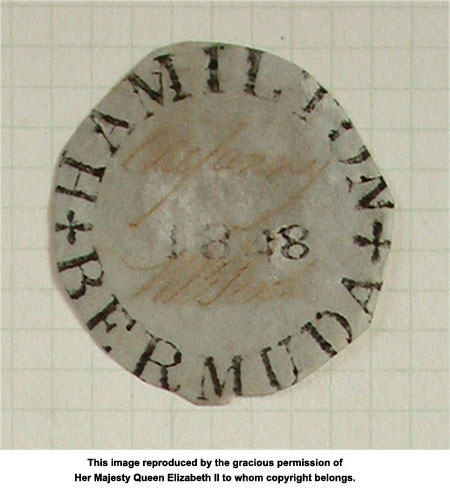 1d Bermuda Postmaster Provisional (Scott #X1), 1848
A Bermuda "Perot" stamp from 1848, one of the eleven known surviving Perots, and one of only three from that year, when they were first issued. The Perots are named after William Bennett Perot, Postmaster of Hamilton, Bermuda. He wrote the words "one penny" above the year stamp and his name below.

A story that has been told in several variations concerns the unused Two Pence Post Office Mauritius, considered by many the best stamp in the Collection. The stamp was acquired at auction in 1904 for a then-record price of 1450 pounds. The future King, then Prince of Wales, instructed his philatelic advisor, J. A. Tilleard, that if Tilleard succeeded in purchasing it, he should send a telegram stating "Stamp is yours," rather than openly specifying the price. A little later a courtier asked The Prince if he had seen "that some damned fool had paid as much as 1400 pounds for one stamp." "Yes," came the reply. "I was that damned fool!" 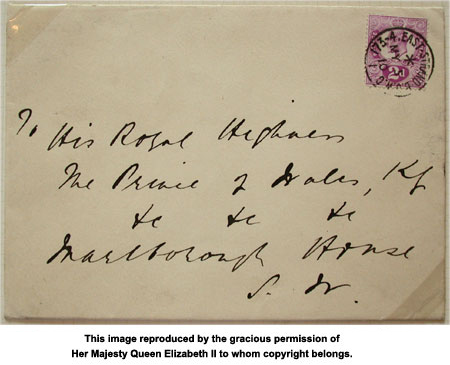 2d Great Britain series of 1910, on cover to HRH Price of Wales received by him the day he became King George V, on death of King Edward VII.
The only known used example of the 1910 Two Pence Tyrian Plum. The stamp bears the portrait of King Edward VII, and was scapped following his death. This letter, the only known mail piece sent using the stamp, was received by The Prince of Wales on May 6, 1910, the date that he became King as King George V.

In 1906, the Prince of Wales decided to confine his collection almost exclusively to the unused stamps of Great Britain and the British Empire. Between 1907 and 1918—first as Prince of Wales and after May 10, 1910, as King George V—he bought 18 collections as well as individual items. After 1918, he filled gaps in the Collection with extensive purchases, mainly of small lots or, on occasion, individual stamps. 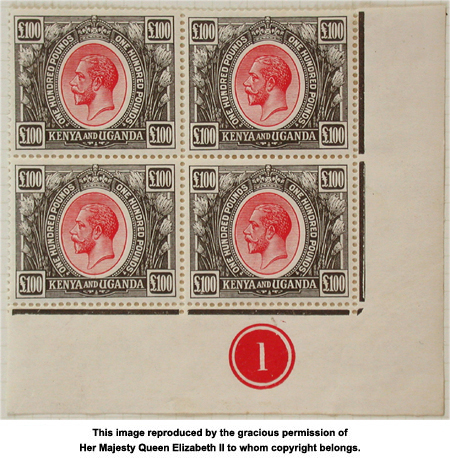 100 pounds Kenya and Uganda (Scott #41F), unused block of 4 with plate number 1 at lower right, unused
Block of four of a Colonial high-value stamp, Kenya and Uganda, 1925. For many years, British and Colonial authorities considered postage just another tax. The high values of many stamp series were used for revenue purposes rather than postage, and were often printed in very small quantities. This is believed to be the only surviving block of four of the Kenya and Uganda 100 pounds value, which was mainly used for liquor and game hunting licenses.

King George V's achievement, made possible in part by the time in which he lived, was to assemble so many rarities and gems in a single collection. It can never be repeated.

Because of the extent of the Collection, the selection of materials for this exhibition was difficult. Some of the items are unique, and others are among a handful of surviving examples.

‹ Issued Examples up Special Rarities-Page One ›
Back to Top