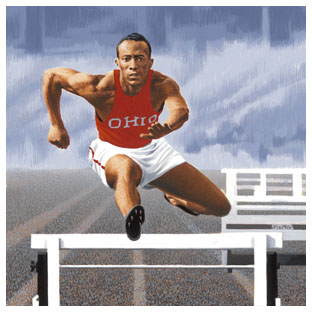 Sports stamps celebrate athletic excellence and popular pastimes. Individuals, including coaches, are honored for their athletic achievements and their dedication to personal excellence: records set, bars raised, and fans awed. Many of those who appear on stamps have also inspired us off the playing field. Lou Gehrig, for example, showed great bravery and dignity in the face of personal adversity. Satchel Paige and other African-American athletes were trailblazers for diversity in various sports. Wilma Rudolph and Roberto Clemente encouraged and mentored children and young athletes.

In this gallery, artist Joseph Saffold’s highly-detailed action portraits of Clemente, Gehrig, and Paige depict each National Baseball Hall of Famer as close to the zenith of his career as possible. Saffold also paid special attention to the uniform designs, as teams periodically changed their look from one season to the next. Saffold used acrylics, colored pencils, and occasionally oils to give the look and feel of cloth, particularly the folds in the uniforms. Saffold commented that loose, baggy pants made for better paintings. 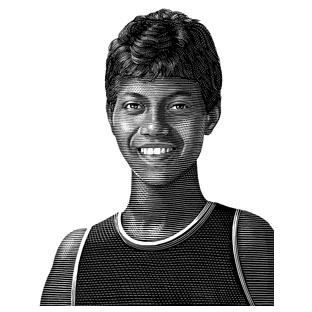 Wilma Rudolph
Wilma Rudolph {1940-1994} had been a sickly child, but at the 1960 Olympics in Rome, she became the first American woman to win three gold medals in track-and-field during a single Olympic Games, despite running on a sprained ankle. She attended Tennessee A & I State University on a scholarship and graduated in 1963. Although she retired from running track in 1962, she worked with young people as a teacher and a coach. She was inducted into the U.S. Olympic Hall of Fame in 1983 and honored with the National Sports Award in 1993.

The technique Mark Summers used to create this portrait is called scratchboard. An actual board is covered with a smooth, white waxy substance that is coated with black ink. The artist "scratches" into the coating with a blade, to reveal white lines under the black surface. The artist suggests features – such as Wilma Rudolph's vibrant smile – by highlighting rather than outlining. (See two more scratchboard portraits in History and Exploration: Jonas Salk and Albert Sabin.) 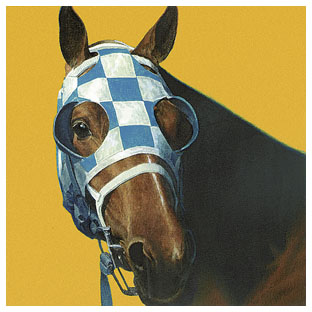 Secretariat
Affectionately known as "Big Red," Secretariat was a sturdy, chestnut-colored thoroughbred who made his racing debut on July 4, 1972. He won five contests that year and was named Horse of the Year. In 1973, Secretariat became the first horse in 25 years to win the coveted Triple Crown. In May that year, he ran the Kentucky Derby in less than two minutes, the fastest finish ever recorded at the prestigious race. The colt then went on to win the Preakness Stakes and, in June, the Belmont Stakes, which he won by a triumphant 31 lengths.

Jesse Owens
On May 25, 1935, Jesse Owens {1913-1980} raced his way to world-class stardom. That momentous afternoon, Owens, a student at Ohio State University, was credited with setting five track-and-field world records and tying a sixth. The following year he earned four gold medals at the Olympic Games in Berlin, Germany. Owens became a popular inspirational lecturer, and President Gerald Ford awarded him the Presidential Medal of Freedom in 1976 for motivating "countless others to do their best for themselves and for their country." 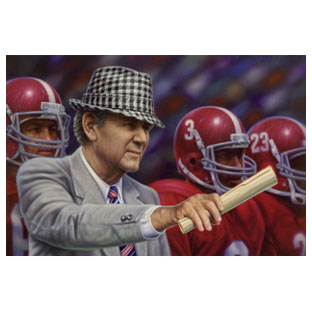 Bear Bryant
Paul "Bear" Bryant {1913-1983} set a new record for wins by a college football coach in 1981, when the University of Alabama Crimson Tide beat the Tigers of Auburn University. Bryant himself had played football at the University of Alabama. Legend has it that he earned his nickname wrestling a bear for $1 at a carnival. Instantly recognizable in his hounds-tooth hat and sport jacket, Bryant won six national championships and amassed an incredible career record of 323 wins, 85 losses, and 17 ties. 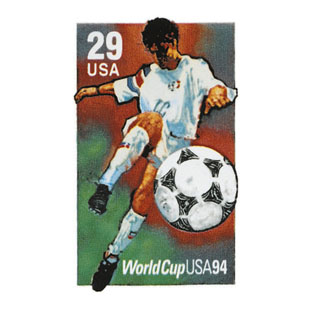 World Cup Soccer
The sport of soccer, called "football" by the rest of the world, has gained great popularity among young Americans. The month-long, international soccer tournament known as the World Cup is held every four years, and in 1994, the U.S. hosted the event for the first time. For four weeks, a record number of fans thronged nine different venues from coast to coast, cheering teams from 24 nations competing for the world championship. In the end, the Brazilian team won its fourth World Cup by defeating Italy 3-2 on penalty kicks. 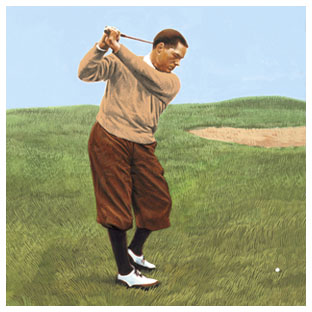 Bobby Jones
In 1930, Bobby Jones {1902-1971} became the first, and still the only, person ever to win the Grand Slam of golf. Later that year, at the age of 28, he retired from competition, having won a career total of 13 major titles, including three British Open and four U.S. Open Championships. In 1934, Jones helped establish the prestigious Masters Tournament. Later, he designed golf courses, made instructional films, and wrote several books about the sport of golf. 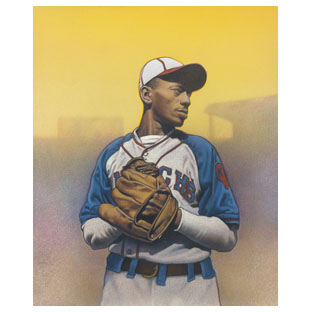 Satchel Paige
A star in the Negro Leagues, Robert LeRoy "Satchel" Paige {1905-1982} pitched the Kansas City Monarchs to four consecutive championship titles from 1939 to 1942. In 1948 he became the oldest rookie in the major leagues when he signed with the Cleveland Indians. That season he helped his new team win a very tight contest for the American League pennant. In 1971, Paige became the first player from the Negro Leagues inducted into the National Baseball Hall of Fame. 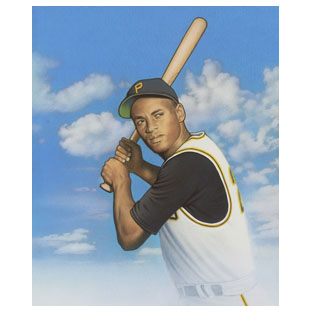 Roberto Clemente
A proud native of Puerto Rico, Roberto Clemente {1934-1972} was a right-handed outfielder admired for his superb hitting and rifle-like arm, as well as his philanthropic spirit. He helped the Pittsburgh Pirates win the 1960 and 1971 World Championships, and in 1973 he became the first Hispanic elected to the National Baseball Hall of Fame. Today Roberto Clemente Sports City - a nonprofit complex located in Carolina, Puerto Rico - offers recreational and educational programs to young people of all backgrounds. 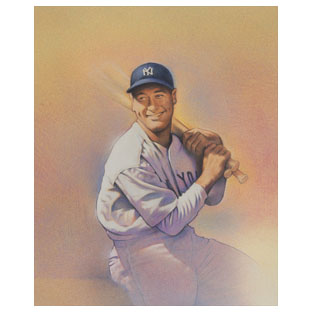 Lou Gehrig
Known as the "Iron Horse," Lou Gehrig {1903-1941} played first base for his hometown New York Yankees and set records for both successive games {2,130} and career grand slams {23}. Even after Gehrig was diagnosed with amyotrophic lateral sclerosis, a rare degenerative disease, he never lost the can-do spirit that had inspired so many. Gehrig bid farewell to his fans from the field at Yankee Stadium on July 4, 1939, declaring, "I consider myself the luckiest man on the face of the earth. I have an awful lot to live for."