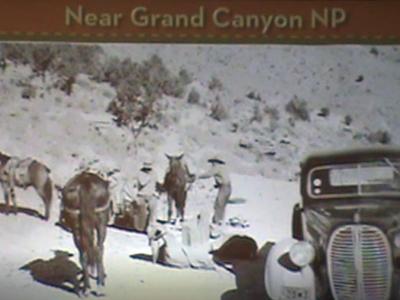 Wish You Were Here Mail and Our National Parks

Presentation by Chief Curator of Philately Daniel A. Piazza featuring objects and stories from Trailblazing, the National Postal Museum’s special exhibition for the 100th anniversary of the National Park Service.

See postal marking devices salvaged from the wreck of USS Oklahoma in the National Stamp Salon and the Mail Call exhibition on the Level 1 (World War II Valor in the Pacfic National Monument).

See an original “B Free Franklin” letter from 1765 that inspired a modern postmark in the National Stamp Salon, frame 1 (Independence National Historical Park).

My First Summer in the Sierra by John Muir.
Originally published in 1911, but based on Muir's notebooks and sketches from a sojourn in the High Sierra as a hired shepherd in the summer of 1869.

Gloryland: A Novel by Shelton Johnson (2009).
Fictional story of a South Carolina sharecropper’s son who walks to Nebraska, joins one of the U.S. Cavalry’s all-black “Buffalo Soldier” regiments, and is posted to Yosemite National Park in 1903.

Wilderness Warrior: Theodore Roosevelt and the Crusade for America by Douglas Brinkley (2009).
Biography focuses on Roosevelt’s drive to preserve national parks and forests, and his personal relationships with early conservationists such as Muir and Gifford Pinchot.

Ansel Adams in the National Parks: Photographs from America's Wild Places by Ansel Adams (2010).
Comprehensive collection of Ansel Adams' photographs of America's national parks, including many that are rarely seen and some never before published.

Ranger Confidential: Living, Working, and Dying in the National Parks by Andrea Lankford (2010).
A behind-the-scenes, tell-all look at daily life in the national parks by a former park ranger.

Uncertain Path: A Search for the Future of National Parks by William C. Tweed (2011).
During a 240-mile hike through the Sierra Nevada, forty-year park ranger Bill Tweed mediates on what the future might hold for the national parks.

Mule Train Mail by Craig Brown. (4-8 years, grades K-3)
Anthony Paya wears a cowboy hat, chaps, and spurs and leads a train of mules on a daily three-hour trek down into the Grand Canyon to bring mail to the townspeople of Supai.

Who Pooped in the Park? by Gary D. Robson. Illustrations by Elijah Brady Clark. (5+ years, grades K+)
In this series of books, Emily, Michael and their parents find poop and footprints in different national parks and discover which animal made them.

The Camping Trip that Changed America by Barb Rosenstock. Illustrations by Mordicai Gerstein. (6-8 years, grades 1-3)
Camping in Yosemite by themselves during 1903, President Theodore Roosevelt and naturalist John Muir see sights and have talks that ultimately lead to the establishment of our National Parks.

Rangers Activity and Sticker Book by Greer Chesher. Illustrations by Guy Porfirio.
Young Jason, the son of two National Park Service rangers, introduces children to seven and men women who give personal accounts about their jobs, exciting adventures, and what inspired them to become park rangers. Includes a word search, puzzles and paper figures of rangers in different park.

America's National Parks Kids' Activity Book by Frank McShane.
Features games, puzzles, mazes, activities, and trivia broken down by the parks' themes as well as the region in which they are located.