V-Mail microfilm technology was a product of years of discovery and experimentation. Soon after the advent of photography in the mid 1830s, John Benjamin (J.B.) Dancer pioneered the first microphotographs by mounting images on microscope slides. The process, refined through the years with the advancement of technology and microphotography, was capable of shrinking regular documents down to a smaller size which allowed for easy transportation and cataloging. Tiny microfilmed messages were lightweight, and were processed quickly. Because of these characteristics, microphotography became a good candidate for a partnership with wartime mail as early as the 1870s.

In July 1870 the longtime border disputes between France and its rival Prussia erupted into the Franco-Prussian War. In September of 1871 the conflict escalated and the Prussian army’s siege of the capital effectively cut off the mail between Paris and its surrounding cities. Under these strained conditions, members of the pigeon fanciers’ society L’Esperance (“Hope”) volunteered carrier pigeons to deliver the mail. Initially, government and postal officials were skeptical of the small birds. Nevertheless, as the siege dragged on, it was apparent that a way to get the mail through the blockade was through the air.

The tiny avian messengers did not fly into Paris directly but rather were carried to the city limits by hot air balloon. Balloons seen over Paris were vulnerable to Prussian gunfire and it was safer to launch the balloons with their winged passengers outside of the city boundaries.

Several stations were set up throughout the surrounding French countryside to house the birds and their handlers. These sites also served as relay stations to help the balloons maintain communication with each other. Once a balloon was within safe range of the city, the handler would release the pigeon and the balloon would fly back to safety.

The birds had the difficult task of maneuvering around the perils of the war-torn city. The winged messengers carried the microphotographed letters inside small, quill containers. The successfully delivered microfilm was enlarged for transcription and reading.

In January 1941 Great Britain partnered with the Eastman Kodak Company to launch the Airgraph service. The Airgraph was created to provide a faster mail service to British forces in the Middle East and Africa. Before the Airgraph was inaugurated, ordinary letters had to be transported by ship. For a letter to travel from Cairo, Egypt to the United Kingdom took an estimated time of 24 to 30 days. The Airgraph reduced that traveling time in half because the microfilmed letters could travel by air instead of by sea. Approximately 4,500 negatives of microfilmed letters weighed just one pound, which left more room for shipping ammunition, blood plasma, and clothing.

Although V-Mail was modeled after Airgraph service with U.S. adaptations to the British format. The size of the Airgraph letter sheet stationery was expanded from 8 x 11 inches to 8 1/2” x 11” and the photographic-print facsimile was also enlarged from 4” x 5” to 4 1/2” x 5 1/2”. Even though these changes were seemingly small, these few extra inches gave the writer more space and helped make the tiny letters easier to read.

V-Mail forms also had a different address section which made for a speedier delivery. Airgraphs provided a panel for the recipient’s address and the sender was instructed to include his contact information just above the body of his letter. V-Mail stationery had two distinct boxes that separated the sender’s information from the receiver’s. This change not only cut back on misaddressed mail but also made letters easier to trace back to the original sender. 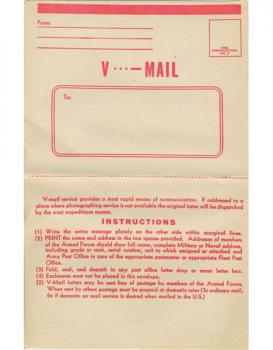 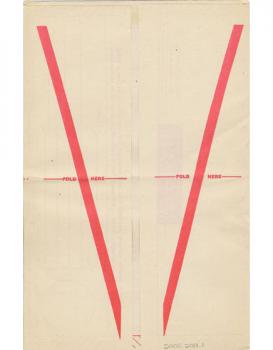 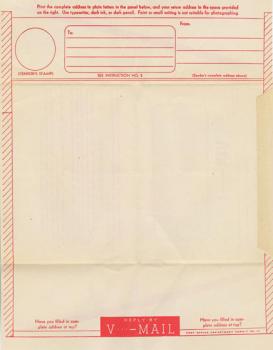 V-Mail was designed so that it did not require an envelope. NPM object 2000.2001.1 donated in memory of Dr. Anthony M. Circo.

‹ Timeline up Operating V-mail ›
Back to Top