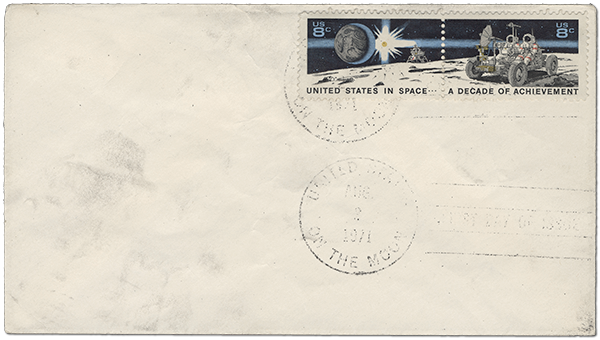 On August 2, 1971, U.S. astronaut Dave Scott postmarked this first day cover on the Moon—an act as nationally symbolic as planting a flag.

During the 1971 Apollo 15 mission, astronauts Dave Scott and Jim Irwin spent three days exploring the Moon from the Lunar Rover. On the last day, Scott reached under the Rover’s seat for a pouch. It held an envelope bearing die proofs of two space stamps. Scott postmarked this cover while, 238,000 miles away, the USPS issued the stamps on Earth.

The first postmark Scott made was faint, so he made another below it. The smudges on the left side are thumbprints made by his space suit glove.

Joe Allen: Good picture, Dave, have at it.

Dave Scott: Okay. To show that our good Postal Service has deliveries any place in the universe, I have the pleasant task of canceling, here on the Moon, the first stamp of a new issue dedicated to commemorate United States achievements in space. And I'm sure a lot of people have seen pictures of the stamp. I have the first one here on an envelope. At the bottom it says, "United States in Space, a decade of achievement," and I'm very proud to have the opportunity here to play postman. I pull out a cancellation device. Cancel this stamp. It says, " August the second, 1971, first day of issue. What could be a better place to cancel this stamp than right here at Hadley Rille. By golly, it even works in a vacuum. 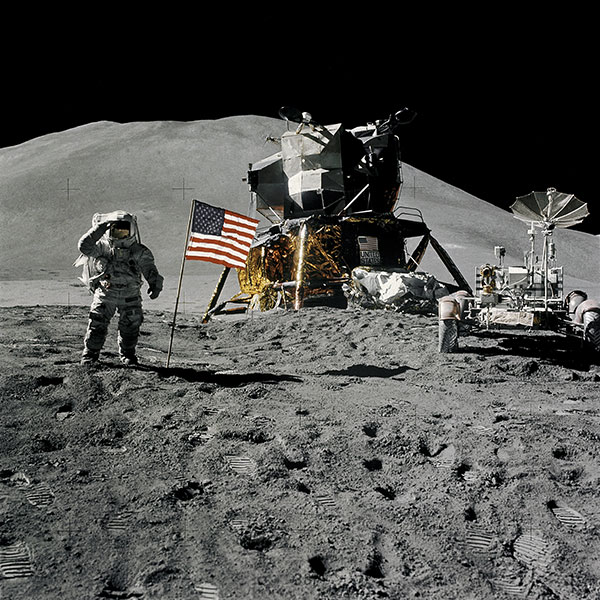