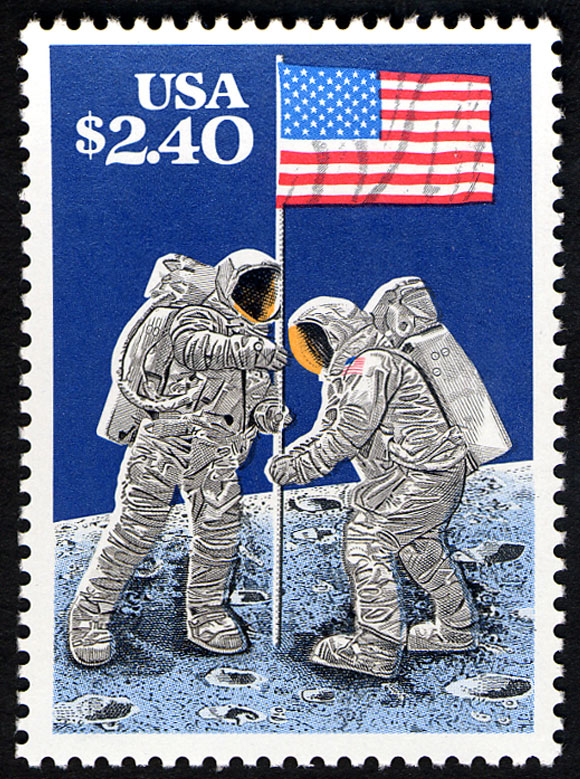 A $2.40 Priority Mail stamp honoring the 20th anniversary of the Apollo moon landing was issued July 20, 1989 in Washington, DC. The dedication ceremony was held in conjunction with gala anniversary celebrations at the National Air and Space Museum.

The stamp, which features two astronauts planting the Stars and Stripes on the lunar surface, enjoyed a legacy of its own. The stamp's designer, Christopher Calle, of Ridgefield, CT, was the son of Paul Calle, the veteran illustrator who produced the first Moon Landing tribute, a 10-cent airmail stamp issued September 9, 1969. It became one of the most popular and recognizable postage stamps ever issued.

Like the memorable work his father created for the 1969 stamp, Christopher Calle's original mixed media design was based on NASA photographs of astronauts practicing various maneuvers before the actual flight.

The stamp was printed in the offset/intaglio process at the Bureau of Engraving and Printing, and was issued in panes of 20. 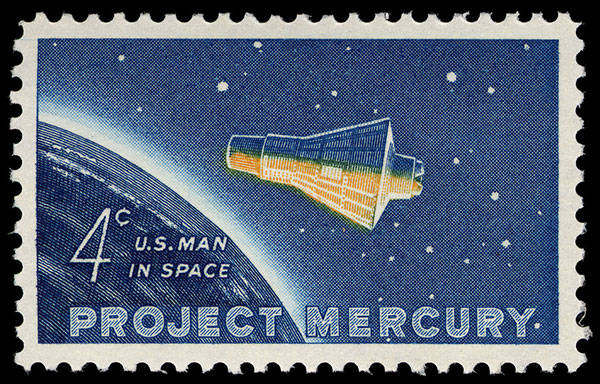 The Post Office Department signaled the first orbital flight of a United States astronaut on February 20, 1962, with the issuance of the 4-cent Project Mercury commemorative stamp, placed on sale throughout the country at the exact hour Colonel John Glenn's historic flight officially ended

The stamp features an image of the Mercury "Friendship 7" capsule circling the earth. The spacecraft is now housed at the National Air and Space Museum, Washington, DC.

The stamp is 0.84 by 1.44 inches in dimension, arranged horizontally, and issued in sheets of fifty. The color of the stamp is blue and yellow on white paper. The initial printing order of 100 million stamps was later increased to 200 million. 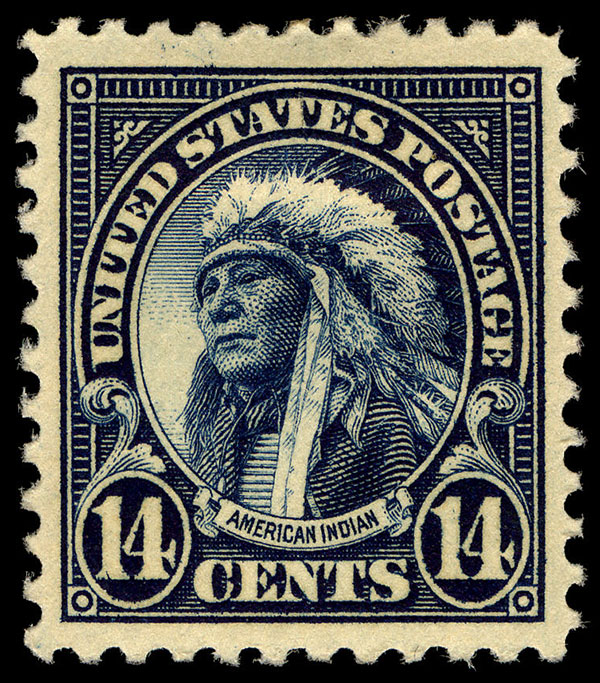 A figure identified simply as 'American Indian' appears on the 14-cent stamp—the first 14-cent stamp ever issued in the United States. Clair Aubrey Huston designed the stamp, which was inspired by De Lancey Gill's photograph of Hollow Horn Bear (1850-1913), a Brule Sioux. Gill took the photograph in March 1905 when Hollow Horn Bear was in Washington, D.C., for the inauguration of Theodore Roosevelt. The Smithsonian Institution now owns the photo. Louis Schofield engraved the die for the vignette. The frame was engraved by Frank Lamasure, Edward M. Hall, and Joachim C. Benzing.

The American Indian stamp, initially printed on the flat plate press, was placed on sale on May 1, 1923, both in Washington, D.C., and Muskogee, Oklahoma. It was subsequently printed on the Stickney rotary press. 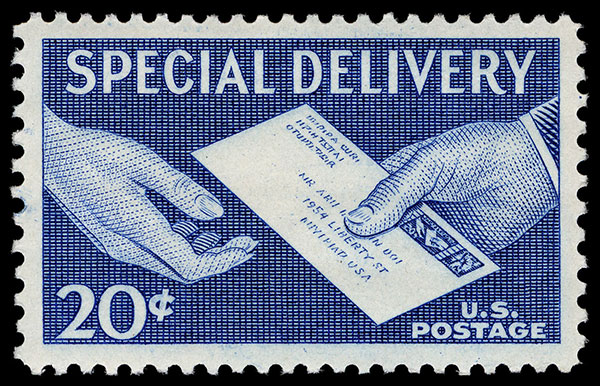 The 1954 20-cent Hand-to-Hand stamp used the striking image of the special delivery carrier hand-delivering a letter to a customer. The design was used again in 1957 on the 30-cent denomination stamp.

There is uniqueness to this special delivery stamp that has bestowed upon it a modicum of fame. The Hand-to-Hand special delivery issue was the first and only U.S. stamp to feature itself in its design. The second cancelled stamp featured on the envelope is the 3-cent Statue of Liberty, which is part of the Liberty Issue released a few months earlier. The address on the envelope is "1954 Liberty St."