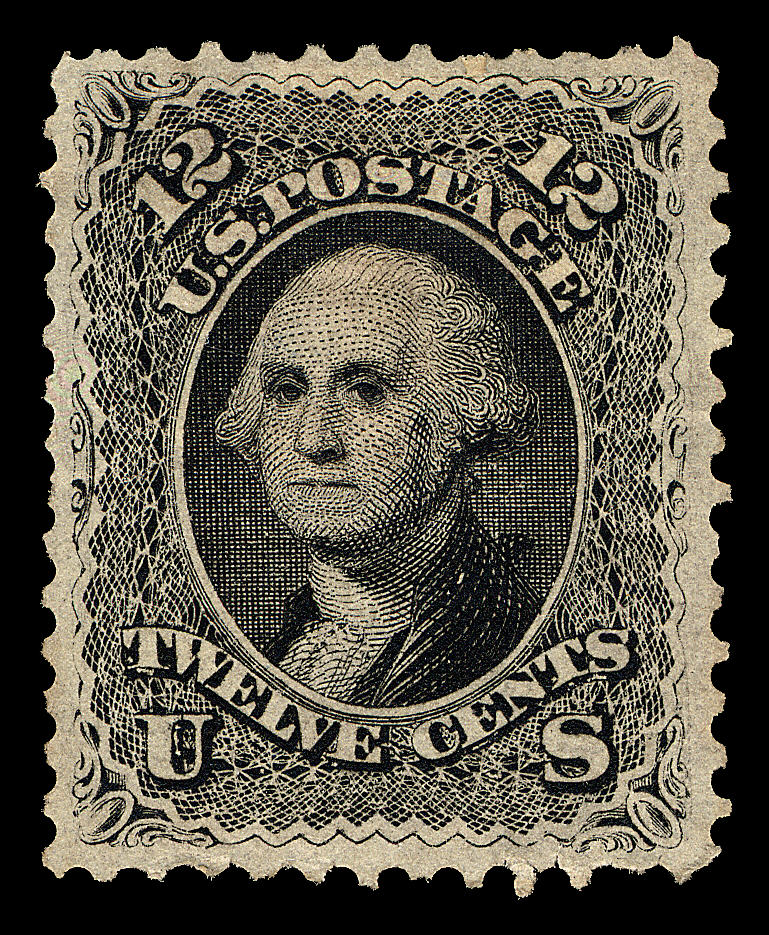 When the National Bank Note Company was founded in 1859, William Marshall was one of the first portrait engravers hired. By early 1860, Marshall was tasked with engraving a vignette for the upcoming 1861 Issue and sent to Boston to use Gilbert Stuart’s portrait painting of George Washington as his model for the new engraving.

This painting was one of two unfinished portraits of the Washingtons that Martha Washington had commissioned in 1796. She had intended them for the family home, Mount Vernon, but Stuart failed to deliver them. They had hung in the Boston Athenaeum from 1828 until 1874 in an exposition honoring the late artist. And when the Boston Museum of Fine Arts was built, the unfinished Stuart portraits were exhibited there on long-term loan. After a century of housing and exhibiting the portraits, the Boston Museum of Fine Arts and the National Portrait Gallery in Washington, D.C., were given the option to buy the two paintings. The two institutions now co-own the portraits.

The single 12-cent stamp typically paid the single-weight rate to England after the January 1, 1868, reduction. Before that date the rate would have required two 12-cent stamps. It was also used in combination with other denominations to fulfill larger weight and foreign destination rates. Approximately 7,314,000 stamps of the 12-cent Washington were printed by National Bank Note Company.

In 1875, Post Office Department officials decided to exhibit samples of all previously issued stamps at the Centennial Exposition in Philadelphia the following year. Since this required a special printing, the department ordered extra copies for sale to stamp collectors. 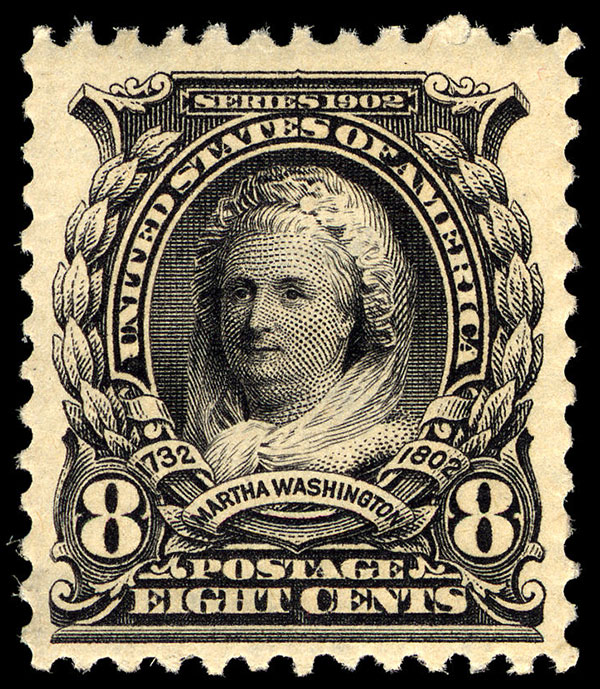 The first stamp to honor an American woman was the 8-cent Martha Washington (1732–1802). She was selected from a list of prominent females submitted to Third Assistant Postmaster General Edwin C. Madden. Martha Washington, wife of George Washington, was the only person depicted on a stamp of the series with a first and last name.

Born Martha Dandridge, she married Daniel Parke Custis as a young woman of eighteen. Custis died in 1757, leaving her with two children, an immense fortune, and a 17,000 acre estate. She married George Washington in 1759. She devoted her life to supporting and comforting him, and together they raised her two children by Custis. Her son John Custis died in young adulthood and her daughter Martha died at sixteen. George and Martha Washington also raised her grandchildren, George Washington Parke Custis and Eleanor Parke Custis. Martha Washington's great-granddaughter, Mary Anna Randolph Custis, married General Robert E. Lee.

The 8-cent violet black stamp was issued December 6, 1902, only in sheet format printed from plates of four hundred and sold in panes of one hundred stamps with gauge 12 perforations. R. Ostrander Smith designed the stamp from an unfinished portrait by Gilbert Stuart. The portrait captured Mrs. Washington as a "stout 65-year-old, with a twinkle in her eyes and a faint grin." (Boston Globe, May 3, 2006)

‹ Bay 12 up Rotating Exhibitions ›
Back to Top