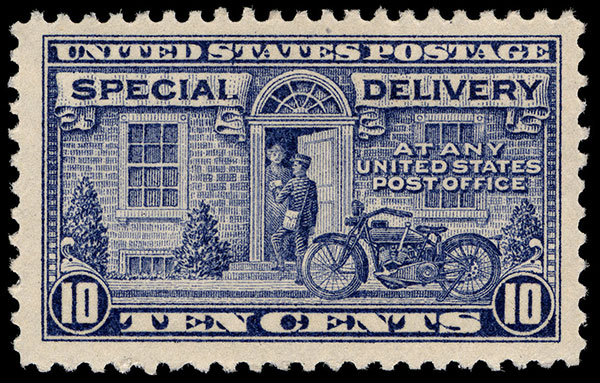 Early symbols of the Special Delivery Service had been the running messenger (who was evocative of winged Mercury), used on stamps from 1885 until 1895, and the messenger on bicycle in 1902. In 1922 the special delivery stamp featured a letter carrier with motorcycle, a mode of transportation that suggested speed, efficiency, and growing modernity of the mail. It was also the first design in this class of stamps to actually show a carrier delivering a letter to a customer.

The motorcycle on the 10-cent Motorcycle Delivery Issue is not a specific brand, but if a postmaster had a motorcycle at his disposal, it was probably either an Indian or Harley-Davidson. And, of course, his special delivery carriers were the cycle's intended users.

Six issues of the Motorcycle Delivery stamp were released with five different denominations in a twenty-two year period. The 1922 Issue had a ten-cent denomination, and so did the 1927 Issue, but the stamp had 11 x 10.5 perforations. The 1925 Issue had an additional five-cent fee for special delivery of parcel post mail, a total fee of fifteen cents. And between 1931 and 1944, the Post Office Department issued stamps in 13-, 15-, and 17-cent denominations. 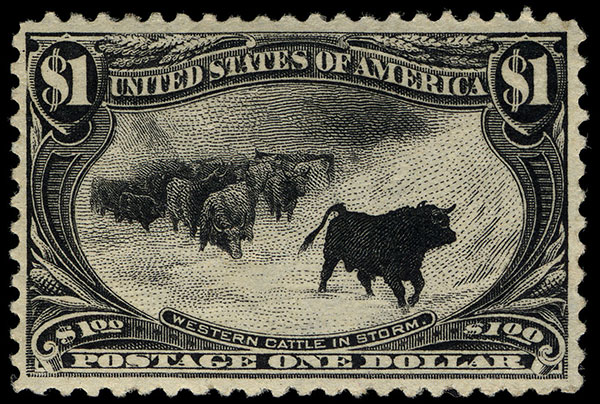 The 1-dollar Cattle in the Storm stamp is considered by many philatelists to be the most beautiful stamp of the Trans-Mississippi Exposition Issue. Others deem it the most intricate and beautiful stamp ever issued by the United States. The breed of cattle that were meant to represent the ruggedness of the American West and that inspired the original painting actually derive from the West Highlands of Scotland.

Prior to the issuance of the 1-dollar Cattle in the Storm, only two other 1-dollar U.S. stamp designs had been printed and released to the public - the $1 Columbian and the $1 Perry. There are instances of philatelic use of the 1-dollar stamp on mail originating from the Trans-Mississippi Exposition, even though it overpaid the postage rate. In many other cases it was used with other denominations to fulfill large-weight and foreign destination rates. A total of 56,900 stamps of this denomination were printed by the Bureau of Engraving and Printing. 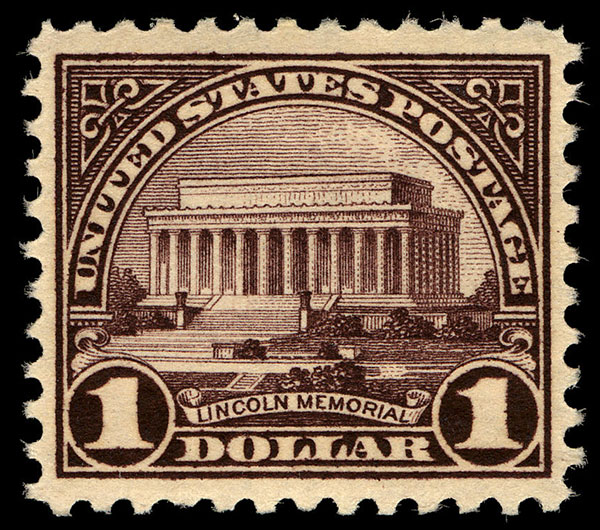 The Lincoln Memorial in Washington, D.C., appears on the 1-dollar stamp. The stamp was issued in Washington, D.C., and Springfield, Illinois, on Lincoln’s birthday, February 12, 1923. The stamp, which was issued only a few months after the completion and dedication of the memorial, was designed by Clair Aubrey Huston, who based his work on a U.S. Army Signal Corps photograph taken as the memorial was being completed. The stamp shows the east façade of the memorial, facing the Washington Monument. The vignette was engraved by Louis S. Schofield. Edward M. Hall and Joachim C. Benzing engraved the frame. The stamp was printed exclusively on the flat plate press.