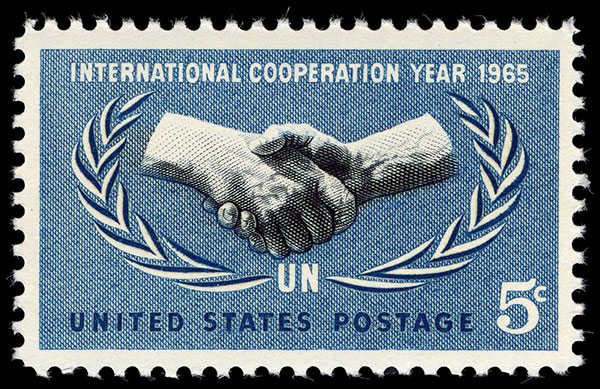 This 5-cent stamp commemorates the 20th anniversary of the United Nations. It was first placed on sale through the San Francisco, California, post office on June 26, 1965.

Designed by Herbert M. Sanborn and Olav S. Mathiesen, this stamp was printed on the Giori press and issued in panes of fifty. An initial printing of 114 million stamps was authorized. 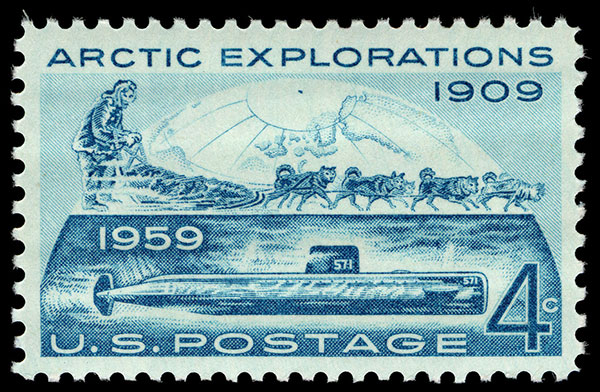 The Department issued this 4-cent stamp to mark the conquest of the Arctic by surface and by sea through the Cresson, Pennsylvania, post office on April 6, 1959. The stamp marked the 50th anniversary of the arrival of Admiral Robert Edwin Peary at the North Pole. It also notes the history-making feat of the US Navy's "Nautilus" almost fifty years later in making the first under-the-sea crossing at the North Pole.

Designed by George Samerjan, the stamp features the upper portion of the globe, with the North Pole area emphasized. The global area is divided horizontally, with the light upper segment indicative of surface transportation and the dark lower portion representative of underwater exploration. Superimposed on the upper portion of the design is a man and his dog-drawn sled. Below is a view of the nuclear powered USS Nautilus. Across the top of the design and against an uncolored background is the inscription "Arctic Explorations." Directly below, to the right, is "1909" in dark Roman lettering, Above the Nautilus, to the left, is "1959," and below the submarine is "U.S. Postage," both in white Roman. The value "4c" appears at the lower right in dark Roman with white outline.

The stamp was printed by the rotary process, electric-eye perforated, and issued in panes of fifty stamps each. An initial printing of 120 million stamps was authorized. 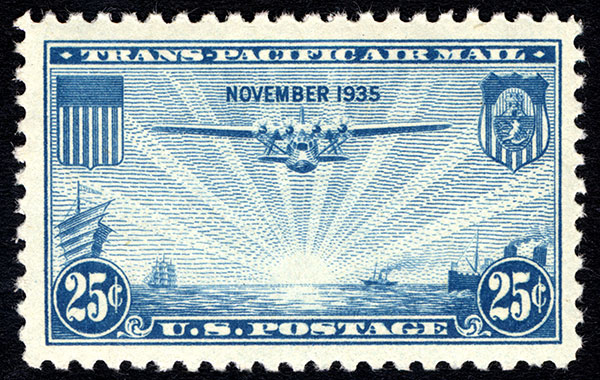 A 25-cent blue airmail stamp showing a head-on view of the Martin M-130 China Clipper with the date "NOVEMBER 1935" was issued on November 22, 1935, to pay postage on mail carried on the inaugural Pan American Airways transpacific air mail route—San Francisco, Honolulu, Midway, Wake, and Guam. The head-on view of the Martin M-130 China Clipper shows its 'sea wings', which were used for lateral buoyancy on water in place of conventional floats usually attached near a seaplane's wingtips. The seaplane is in flight over the ocean with rays of the morning sun rising from America behind it. Four types of sailing and steam vessels below represent the progress in ocean transportation during the previous century: a Chinese junk, a three-masted sailing ship, a nineteenth century vessel, and an ocean liner. Designer A.R. Meissner also included the shields of the United States and the Philippines in the stamp design.

The first day of sale took place in San Francisco and Washington, District of Columbia. In connection with the inauguration of the transpacific airmail service, the first day sales of $69,432.00 set a new first-day sales record. There were 222,294 pieces of mail carried on the flight, including 110,000 sent from San Francisco and 34,516 returned from Manila.

The rate was based on twenty five cents per leg. A leg was defined as a segment that had a post office at each end. Stops at Midway and Wake did not count as legs because they had no post offices. The new service reduced the time for mailing a letter to Asia and receiving a reply from six or eight weeks down to only two weeks. 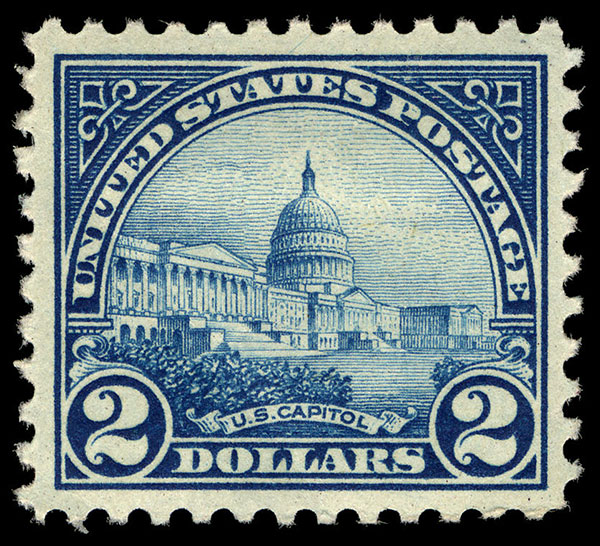 The U.S. Capitol appears on the 2-dollar stamp. The image is based on a photograph in the files of the Bureau of Engraving and Printing taken by an unknown photographer. The House of Representatives side of the building is in the foreground. The stamp was designed by Clair Aubrey Huston and released in Washington, D.C., on March 20, 1923. The vignette was engraved by Louis A. Schofield. Edward M. Hall engraved the words “U.S. Capitol” while Edward M. Hall and Joachim C. Benzing engraved the frame. The stamp was printed only on the flat plate press.