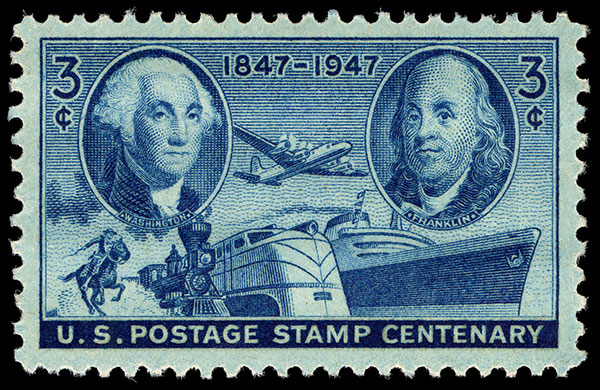 The 100th anniversary of the first United States postage stamps was commemorated with the issuance of a 3-cent blue stamp on May 17, 1947. The vignette displays several means of postal transport—Pony Express rider, old and new locomotives, modern steamship, and airplane. Portraits of George Washington and Benjamin Franklin appear at left and right respectively. These are the same portraits used on the first stamp issue of 1847. A souvenir sheet (Scott USA 948) was issued for the occasion also. 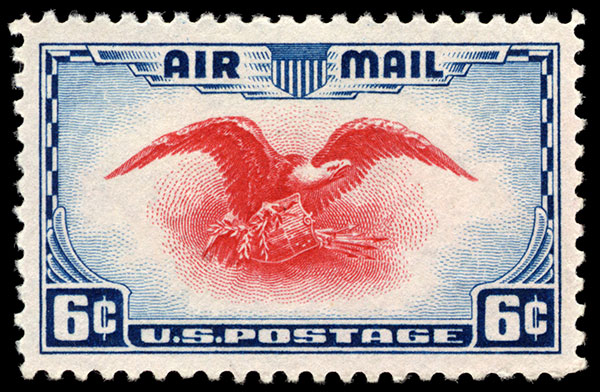 The day before National Air Mail Week began—May 14, 1938—the Post Office Department issued a 6-cent bi-colored airmail stamp in dark blue and carmine. The stamp size was larger than the previous airmail issues, more the size of special delivery stamps. Following criticism that the winged globe airmail stamps were unattractive, Postmaster General Jim Farley had requested models for a new design that would still retain the symbol of flight.

The new, distinctive design featured a bald eagle with outstretched wings and a striped shield, bearing in its talons a shield, olive wreath, and bundle of arrows. This eagle had been extensively used previously on government bonds and fiscal issues plus as an adaptation for the Library of Congress bookplate. The eagle symbolized freedom, the olive wreath peace, and the bundle of arrows, protection. The elements of the stamp are also included in the official Great Seal of the United States.

The first day of issue took place at Dayton, Ohio, home of the Wright Brothers, and at St. Petersburg, Florida, the location of the first passenger flight in 1914 and the site of the 1938 American Air Mail Society convention. An effort was made to make the new stamp available at all post offices participating in National Air Mail Week, May 15-21.

Because the flat plate printing method required separate operations in completing the vertical and horizontal perforations, some sheets with missing perforations escaped detection by the Bureau of Engraving and Printing. Forty sheets imperforate horizontally reached a Brooklyn, New York, post office. The stamp dealers who acquired the entire supply charged such inflated prices that stamp collectors campaigned unsuccessfully for a reissue at face value of the error. Later one sheet partially imperforate vertically was discovered. However, no inverts reached circulation due to new cross markings in the margins designed to alert printers of an error. 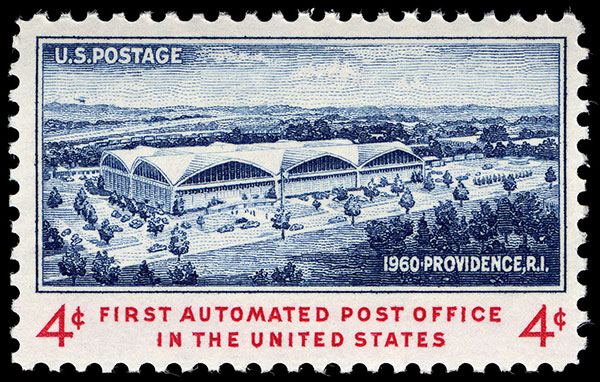 On October 20, 1960, the Post Office Department placed into service a new mail processing facility at Providence, Rhode Island, and widely promoted it as "the first automated post office in the United States." Intelex, a subsidiary of the International Telephone & Telegraph conglomerate, built the thirteen-acre facility under contract and turned it over to the Post Office Department ready to operate. It incorporated the first automatic, high-speed sorting, facing, and cancelling machines as well as three miles of conveyor belts that moved mail between processing areas within the plant and to the loading docks for transport. This stamp, which depicts an architect's rendering of the new facility, was the first US issue that directly celebrated the Post Office Department.

When the idea for a postage stamp publicizing the new facility was presented to the Citizens Stamp Advisory Committee on June 28, 1960, it was unanimously rejected as "obviously self-serving." The committee further predicted that the stamp would be "unpopular because it is promoting automation at a time when unemployment is increasing." Postmaster General Arthur Summerfield authorized the stamp anyway (the committee's findings are not binding), and it proved very popular: 833,306 copies of the stamp were sold on the first day of issue, and 458,237 first day covers were serviced. The success paved the way for future postal themes on stamps, including the 1963 5-cent City Mail Delivery issue, the 1971 8-cent United States Postal Service logo issue, and the 1974 Postal Service Employees issue.

The 4-cent stamp paid the domestic first-class letter rate. It was printed in dark blue and carmine ink on the Giori press in sheets of 200. These were further divided into four panes containing fifty stamps each for shipment to post offices. Victor S. McCloskey, Jr., and Arnold J. Copeland designed the stamp, and Charles A. Brooks engraved it.

While the stamp was a great success, the same could not be said for the project it celebrated. Known officially as "Project Turnkey," the post office of the future had more than its share of problems. The name Turnkey was selected because the building was to be set to work processing mail with the "turn of a key." Unlike existing post office buildings, the Providence, RI building was constructed to fit the new, large machines. The one-floor building design used only two supporting columns, maximizing floor space for the use of mail processing machines.

A 1962 report to Congress revealed that the project was not adequately processing mail for the area. A number of machines were not being used to their full potential, while several had not been put to use at all. Employees had not received adequate training to operate the machines, which led to malfunctions and equipment failures. A year earlier, the "Washington Post" reported that a US House subcommittee had concluded that Project Turnkey "failed miserably."(1) The Turkey project, created by Arthur Summerfield, one of the Department's most forward looking Postmasters General, was greatly criticized by his successor, J. Edward Day. Postmaster General Day suggested that project's name "might be rendered more appropriate by knocking out the "n" in turnkey."(2)