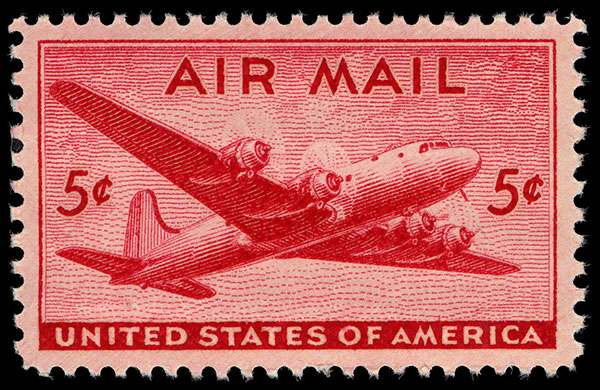 The Post Office Department issued the 5-cent DC-4 Skymaster stamp (Scott C32, large format) on September 25, 1946. Because the rate did not take effect until October 1, 1946, a first day cover required two stamps or one stamp and a 3-cent stamp to make up the eight-cent rate.

Effective October 1, 1946, the domestic airmail rate fell from eight cents per ounce to five cents per ounce. Most significantly, this rate applied to United States possessions and territories for mail to the US mainland For most, this resulted in major cost reductions. This rate remained in effect until January 1, 1949, when it rose to six cents per ounce.

Prior to the new rate, an airmail letter of one ounce from the Hawaiian territory was ten cents per half ounce to the mainland. After October 1, 1946, this became five cents per ounce. This resulted in a savings of fifteen cents for each one-ounce letter.

The Post Office Department actively promoted "Nickel Airmail" in an effort to increase volume during the postwar era. Volume did increase by twenty-six percent in the thirty post offices handling seventy-five percent of the nation's airmail in the first fifteen days of the new rate. 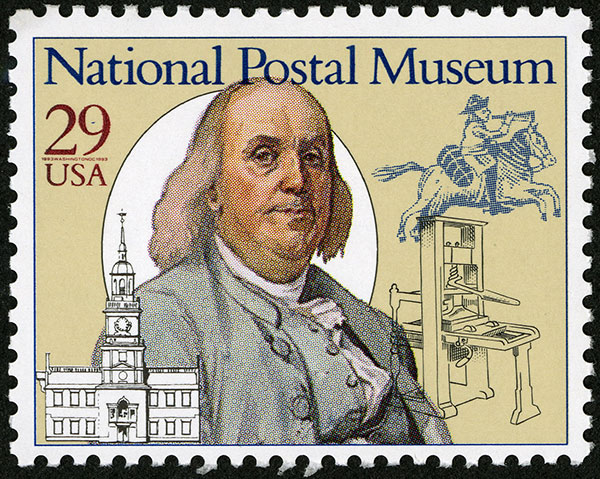 The Smithsonian's National Postal Museum (NPM) opened to the public on July 30, 1993, and was celebrated on that day with the issuance of a se-tenant block of four commemorative stamps. The stamp designs feature historical moments in U.S. postal history and depict objects and themes represented in the museum's inaugural exhibit galleries.

According to the museum's founding director, James H. Bruns, the National Postal Museum helped determine which objects and images would be used in the design. Many of the elements depicted in the stamps were represented in the museum's inaugural displays including a Concord stage coach, a 1930s mail truck, and the Inverted Jenny stamp. Bruns said that the "stamps were in effect like a miniature visit to the Museum."

The Citizen Stamp Advisory Committee (CSAC) and NPM had input in deciding what would be featured on the stamps. Committee members at that time were interested in classical themes and historical events. Unlike other commemorative stamps, the NPM issue used four stamps to convey the sense of traveling through time.

Interestingly, two artists worked on the design, Lou Nolan and Richard Schlecht. Art Director Derry Noyes thought that the artist Richard Schlecht "did a very good job in conveying the message" through stamps as well as telling the story of transportation. Schlecht's long career as an artist with National Geographic helped him in working with the interpretation of historical themes. Noyes explained that the stamps are "semi-jumbo" (a little larger) than usual. The complex design features portraits and line drawings. The main figures are framed by a circular white background.

The stamp depicting the 18th century features Benjamin Franklin, reflecting his career as printer, postmaster and statesmen. He is represented by a printing press, mail rider, and Independence Hall. The Franklin portrait is based on the well-known painting by Joseph-Siffred Duplessis which can be found in the Smithsonian's National Portrait Gallery.

The artwork was completed in ink and watercolor collage on board. The stamps were printed using the offset-intaglio process by the American Bank Note Company. The artist's line drawings became engraved black images of a printing press, stagecoach; airplane, mail truck, letter, and cancellation. In some cases, these elements deliberately overlap the central image.

The National Postal Museum is a joint effort between the Smithsonian Institution and the U.S. Postal Service. It was appropriate that the stamps were dedicated on July 30, 1993, in an opening day ceremony at the museum that included representation from the U.S. Postal Service, James H. Bruns and Robert McC. Adams, then Secretary of the Smithsonian Institution. 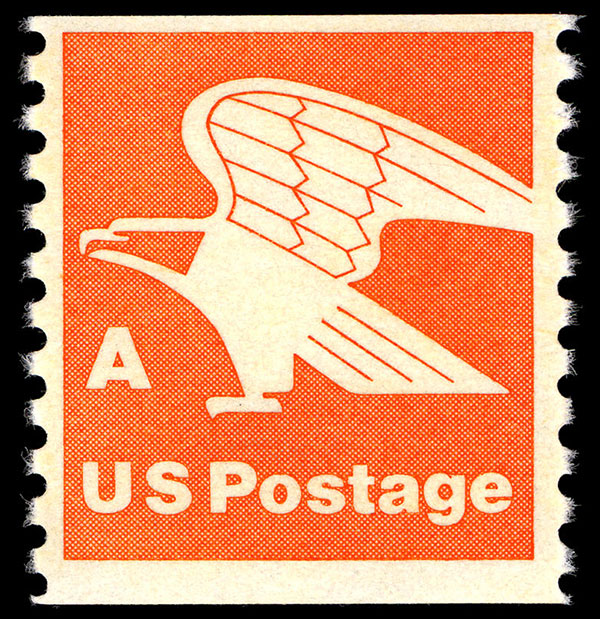 A non-denominated fifteen-cent Eagle stamp was first placed on sale at Memphis, Tennessee, on May 22, 1978. This stamp was intended for domestic use.

The stamp was issued in a sheet of 100, and coils of 100, 500, and 3,000, and a book of twenty-four. The stamp design was originally used on the 8-cent embossed stamped envelope designed by Bradbury Thompson and issued in May 1971.