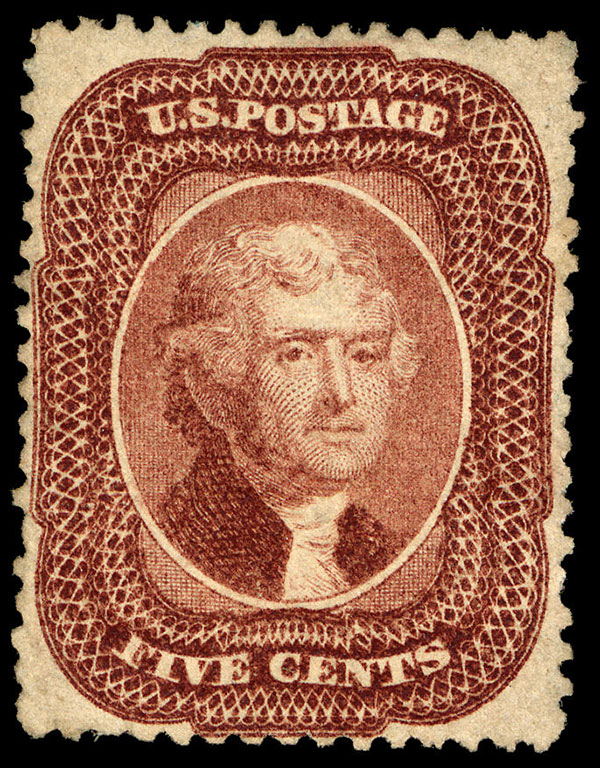 The first U.S. stamp not depicting Benjamin Franklin or George Washington, this breakaway 5-cent stamp of the 1851-1861 Issue depicts Thomas Jefferson, the nation's third president. Designed and engraved by Toppan, Carpenter, Casilear & Co., Gilbert Stuart's portrait of Jefferson inspired the issue. The last imperforate stamp released by Toppan, Carpenter, Casilear & Co., it was in use from spring 1856 to summer 1857. When issued in 1856, the stamp served almost no purpose for domestic mail except payment of multiple-weight rates or, in a few cases, the registered mail fee. It was used primarily on mail to foreign destinations, especially France, since it fulfilled the several different rates.

While Toppan, Carpenter, Casilear & Co. printed the imperforate 5-cent Jefferson in only one color (red brown), the perforated issues the firm produced by mid-1857 were printed in at least six major colors. These color varieties of the perforate 5-cent 1856-1861 Issue expose a level of sophistication and degree of difficulty unique to Toppan, Carpenter issues. It is also important to note that the perforated issues were printed with two types of frames. The first, as in the imperforate stamp, has full projections at the top and bottom; the second, which only appears on perforated stamps, has those projections cut away. These later perforated issues fulfilled the same rates. 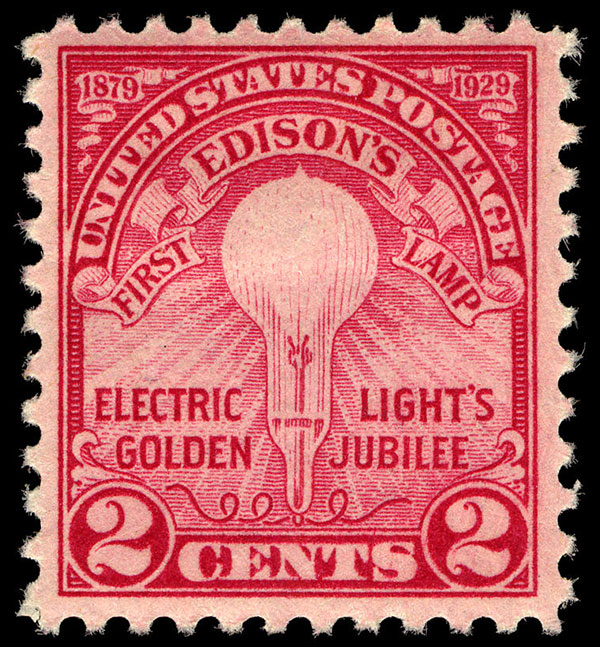 The 50th anniversary of the invention of a commercially viable incandescent lamp was celebrated with a 2-cent red stamp issued on June 5, 1929. Thomas Alva Edison (1847-1931) invented the product in 1879. The stamp pictures Edison's first lamp above the legend 'Electric Light's Golden Jubilee'. The stamp was printed in three forms: flat plate, rotary press, and rotary press coil with vertical perforations. 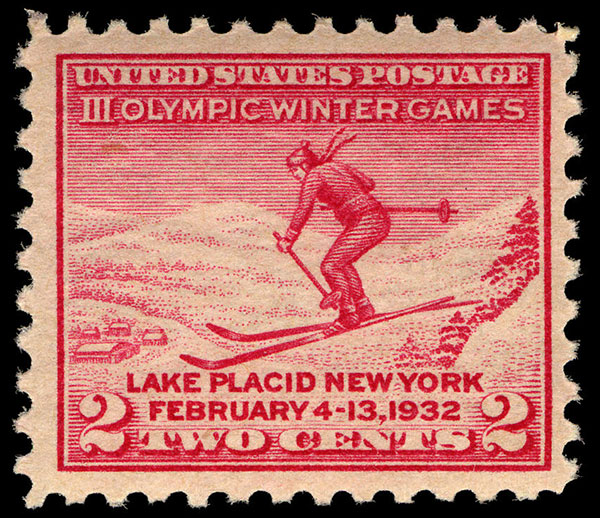 The United States hosted the 1932 Olympic Winter Games, held at Lake Placid, New York. It was customary for the host nation to issue a stamp for the occasion, so on January 25, 1932, the U.S. Post Office Department issued a single 2-cent red stamp picturing a ski jumper. The design received some criticism for showing the skier in an unnatural position, but the public generally accepted the issue. 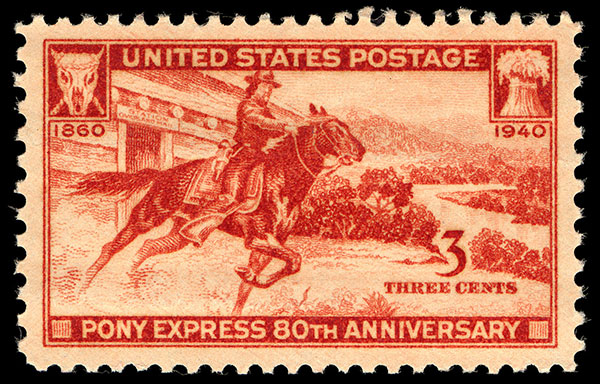 A 3-cent red brown stamp issued on April 3, 1940, commemorated the 80th anniversary of the founding of the Pony Express, a horse and rider mail delivery system. It was created as an alternative to the Butterfield Overland Stage Line, which followed a southerly route westward from Missouri. Concerns that this service would become unavailable should armed hostilities erupt between North and South prompted the alternative.

The Pony Express was viewed as a temporary solution pending completion of the transcontinental telegraph. It proved critical, however, during the opening months of the Civil War as it kept communications open between Union interests in the East and California.

The stamp shows a Pony Express horse and rider leaving a relay station with a load of mail. Most of these riders were teenage boys who loved the thrill of this challenging assignment. Though short-lived, the Pony Express became one of the enduring legends of the Old West. 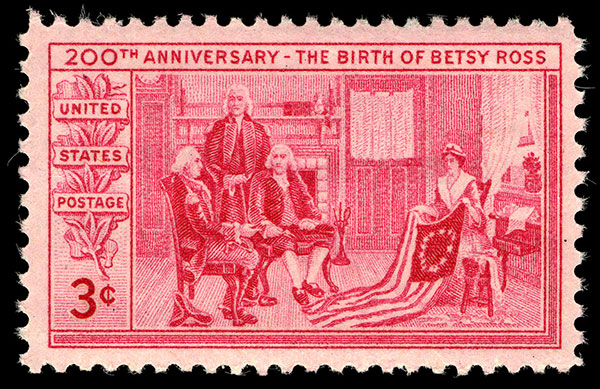 The 3-cent commemorative stamp honoring Betsy Ross was issued in Philadelphia on January 2, 1952, on the 200th anniversary of her birth. . First day of sale ceremonies took place at the Betsy Ross house. According to tradition, in June 1776 Betsy Ross met with George Washington, Robert Morris, and George Ross in her home, where she conducted an upholstery business, to discuss and design the nation's flag. Ross soon thereafter stitched together the first "stars and stripes." An oil painting by Charles H. Weisgerber titled "Birth of our Nation's Flag" inspired the stamp's vignette. The painting depicts Ross and her three callers.

Victor S. McCloskey, Jr., designed the Ross stamp, and the Bureau of Engraving and Printing produced it. The die engravers were Charles A. Brooks (vignette) and J.S. Edmondson (frame, numerals, and lettering), both also employees of the BEP. Six 200-subject electric-eye printing plates (#24574-24579) were made for and used on the rotary Stickney Press. Plates were used in pairs on the press, so each rotation of the press produced two sheets of 200 stamps. Each sheet was divided into four fifty-subject panes for distribution to post offices. Stamps were perforated 11x10.5 and printed on unwatermarked paper.

The 3-cent Ross commemorative paid the postage rate for a one ounce first-class domestic letter.