In 1962, following the recommendation of the presidentially appointed Advisory Board of the Post Office Department, the Department developed a numeric address coding system. By its launch in July 1963, the Department had assigned a five-digit “ZIP Code” to every address in the nation. The ZIP Code helped postal employees manually sort mail by consolidating regional, city, and state information into five easy-to-read numbers — previously, clerks had to memorize the names and locations of thousands of post offices in order to sort mail to the right hub.  The code also enabled computerized presorting of mail by large-volume mailers, who could then bundle and deposit mail sorted by sectional center, speeding delivery by eliminating multiple handlings. The ZIP Code also paved the way for the development of automated mail processing.

At first the use of the ZIP Code was voluntary. In partnership with the mailing industry, the Department embarked on an ambitious promotional campaign to encourage Americans to use ZIP Codes. Since about 80 percent of all mail was generated by businesses, the Department also depended on the cooperation of large-volume mailers to use the new code. To hasten the code's adoption, beginning in 1967, second- and third-class bulk mail had to be presorted by ZIP Code to qualify for discounted postage rates. 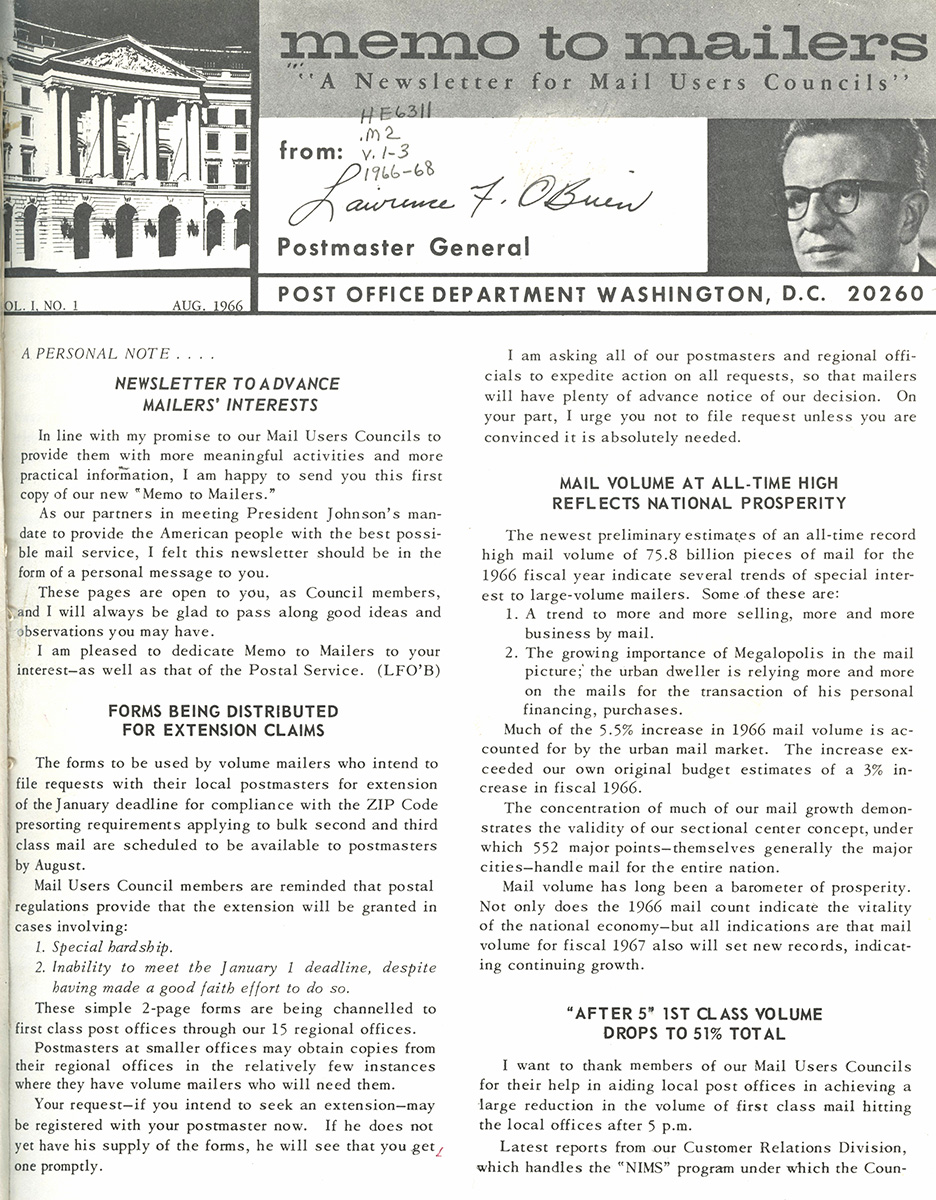 First Issue of Memo to Mailers, 1966
The Postal Service published Memo to Mailers from August 1966 through December 2006, when it was replaced by MailPro.

To help implement the ZIP Code, and to develop and implement other service improvements, the Department opened several new channels of communication with major mailers. In 1965, the Mailers' Technical Advisory Committee (MTAC) was created, consisting of representatives from mailing associations and other segments of the mailing industry, like envelope manufacturers and printers. MTAC advised postal officials on how proposed new processes and equipment might affect the nation’s largest mailers and also helped identify and test possible improvements.

In 1966, the Post Office Department launched Memo to Mailers, a monthly newsletter that showcased best mailing practices and business success stories, and was peppered with practical tips for efficient mailing. In the first issue, Postmaster General Larry O'Brien called it a "newsletter to advance mailers' interests," referring to mailers as the Postal Service’s “partners" in providing "the American people with the best possible mail service."17

In 1967, the Department hosted the first National Postal Forum, a two-day series of moderated panel discussions on topics affecting large-volume mailers, from “Why Presort When You Don't Have To?“ to "Mailing Needs of the Publishing Industry." The first forum was attended by about 2,300 mailers and postal officials. Regularly-held forums served as venues for mailers to discuss recommended service improvements with postal officials, to offer constructive criticism on postal policies and programs, and to learn about new postal initiatives and operational changes. 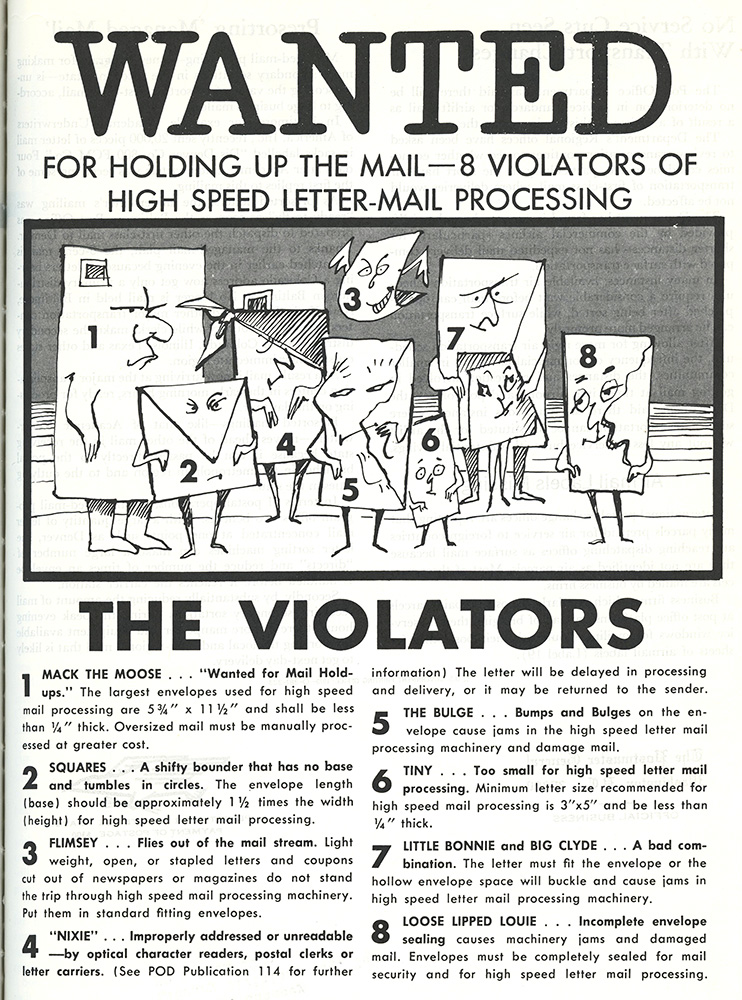 Educational Outreach, 1970
The Postal Service educated mailers in best mailing practices, including how not to design mail. A 1970 issue of Memo to Mailers pictured "the violators," from "Mack the Moose" (oversized envelope) to "Loose Lipped Louie" (incompletely sealed envelope).

The increasing use of the ZIP Code and the Post Office Department's closer partnership with the mailing industry helped the mail flow, but growing volumes of mail and the lack of money to modernize postal facilities and operations continued to threaten efficient mail delivery. Low wages of postal employees led to high turnover, which also stymied the postal system. In 1968, the presidentially appointed Commission on Postal Reorganization, chaired by AT&T’s Frederick R. Kappel, recommended that the Post Office Department be converted into a self-supporting, government-owned corporation, with the ability to borrow money to finance postal buildings and mechanization. In 1970, Congress passed the Postal Reorganization Act, transforming the Post Office Department into the United States Postal Service, a self-supporting establishment of the U.S. Government with more authority over its own operations. The new Postal Service officially began operations on July 1, 1971.