The Growth of the Mail

The luxuries of one generation, become the necessities of the next.
Charles F. Jenkins, publisher, The Farm Journal, 19111

In the first half of the 1800s, the United States grew dramatically — stretching west to the Rocky Mountains after the Louisiana Purchase and to the Pacific coast by the 1840s. The U.S. Mail followed the frontier — by stagecoach, steamboat and rail. But while the postal network expanded, the cost to use it remained high. Most people rarely, if ever, mailed a letter. Merchants and other business professionals, who needed to keep in touch with customers and colleagues, were the most numerous paying users of the U.S. Mail — much of the mail consisted of newspapers and congressional documents that were delivered for free.2

In 1845, Congress slashed postage rates for letters and admitted "circulars and handbills or advertisements" into the mail at lower rates than letters, in an effort to reclaim revenue lost to private express companies, which proliferated in large cities following the development of reliable steam-powered transportation.3 Some private express companies transported mail between cities, while others delivered mail within cities — all were forbidden by law from competing with the U.S. Mail, although many did so. The number of letters in the U.S. Mail more than doubled after the 1845 postage rate cuts, increasing from an estimated 24.5 million in 1843, to 62 million just six years later. In 1851, Congress cut rates even further. 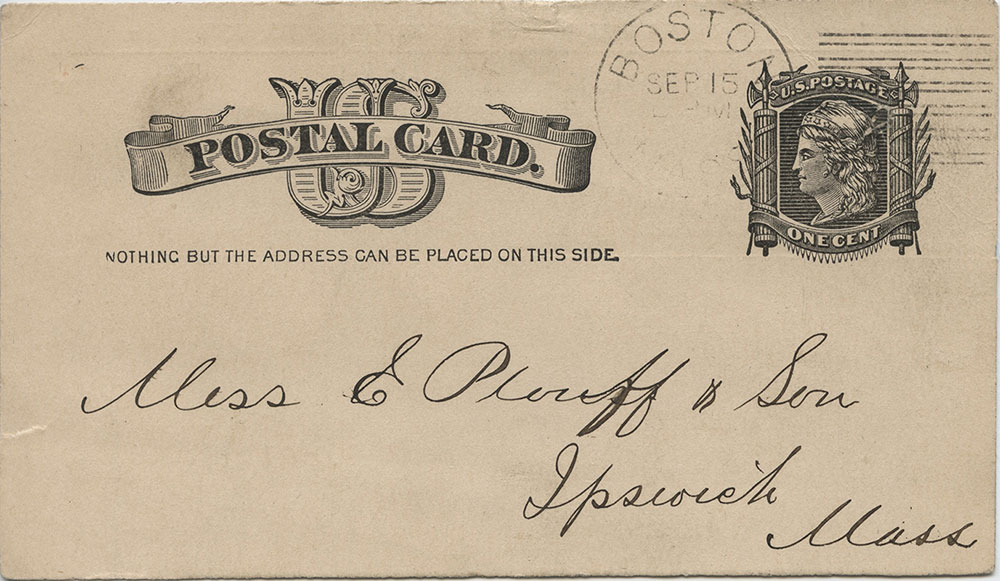 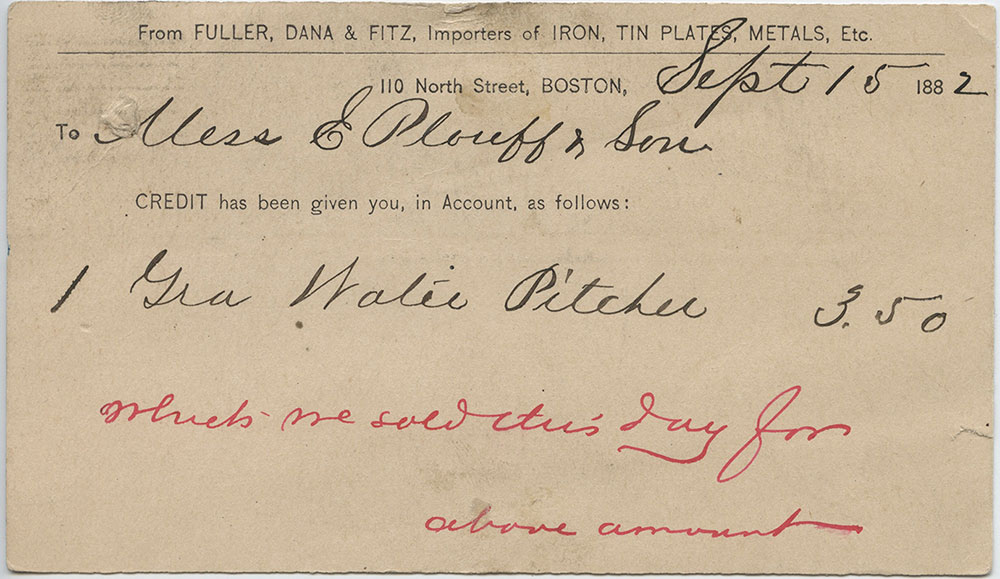 Preprinted Postal Card, 1882
Postal cards cost only a penny to post for most of the years from 1873 to 1952, versus two or three cents for a letter. By 1900, more than half a billion postal cards were issued annually. This postal card from Boston metalware dealers credited the account of E. Plouff & Son, tinsmiths, for the sale of a water pitcher in 1882.

In the second half of the 1800s, mail volume grew roughly sixteen times faster than the U.S. population. A number of factors contributed to growing mail volumes, including the introduction of new postal services, the lowering of postage rates, and the development of new products and services marketed to an increasingly savvy American consumer. One contributing factor was the introduction of government postal cards, which cost only a penny to post for most of the years from 1873 to 1952. Businesses purchased cards by the thousands and had them preprinted with advertisements or fill-in-the-blank messages, simplifying communications with customers and colleagues. The day after the first postal cards were issued in New York City in 1873, the city's postal clerks sold 200,000 in two and a half hours.

The development of the mail order industry around the same time also contributed to greater mail volumes. In 1872, Aaron Montgomery Ward, a former dry-goods salesman, produced his first single-page catalog. Two years later, his catalog had grown to 72 pages; by 1897, it was nearly 1,000 pages. Ward's success was matched by Sears, who overtook Ward in sales just three years later.

Free home delivery of mail in the countryside — called "rural free delivery" or RFD — further fueled the growth of the mail. Before the introduction of RFD in 1896, getting mail required a lengthy trip into town; RFD brought it directly to farms. Mail volume also climbed following the introduction of Parcel Post in 1913, which allowed heavier items to be mailed. Parcel Post electrified the mail order industry: Sears filled five times as many orders in 1913 as it did the year before. More mail created more mail, as catalogs, orders, and payments for orders also traveled by mail.

Meanwhile, cheaper paper and improved printing methods spurred the growth of periodicals; the number of newspapers increased from 5,871 in 1870, to 11,314 in 1880. Magazines also flourished — their numbers increased by 93 percent in the 1880s. In 1885, the postage rate for periodicals was slashed from two cents to a penny per pound, which meant that most periodicals were delivered for a mere fraction of a cent. Advertising took off in periodicals — the number of ads in Harper's Magazineincreased more than twentyfold between 1882 and 1890, from 15 to 348. The sale of advertisements boosted publishers’ profits, putting more and more magazines into the mail. 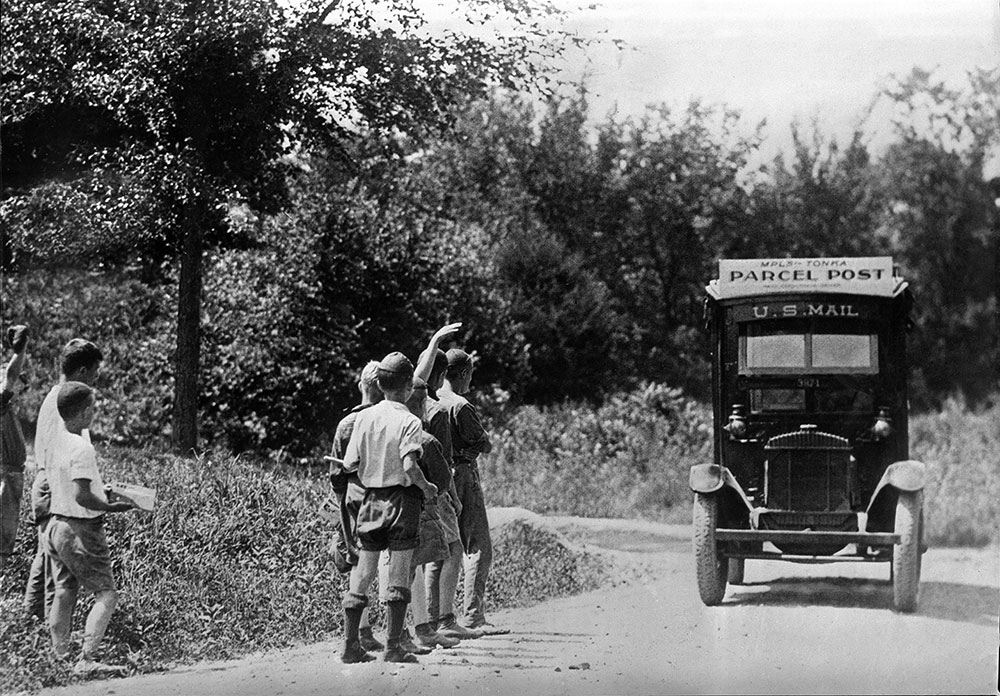 Many advertisers preferred to mail information to potential customers or supporters directly, especially when targeting a select audience. Direct mail could be sent to a select group of people who, if not already customers or supporters, were likely to become so. Advertisements didn't just promote goods and services — they also promoted political candidates, political party platforms, and social and charitable organizations and causes. In the 1880s, typewriters and duplicating machines made it possible to cheaply produce dozens or hundreds of copies of printed pages. Mail service providers emerged to assist advertisers with especially large mailings. Some print shops expanded into mailing services, while mail shops sprang up that specialized in addressing and sending out large mailings. Letter shops designed, created, addressed, and mailed items. Mailing list brokers, meanwhile, supplied lists of names and addresses of prospective customers.

The success of a direct mailing hinged on reaching the right people by using an accurate mailing list. Mailing lists required regular maintenance, because every year some addressees moved, changed their names, or died. Beginning in the 1920s, postmasters were required to correct mailing lists upon the request of the list owners, for a small fee, and were also directed to correct single addresses if mailers had printed a pledge on the mailpiece stating that they would pay for the service.

Simplified addressing, which let mailers reach every addressee in a community without having to keep an up-to-date mailing list, was introduced for third-class mail delivered along rural routes in 1923; in 1927 it was extended to post office box holders at post offices not having city delivery. Instead of labeling each piece of mail with a specific name and address, mailers could simply deposit enough pieces for a carrier route or post office box section, addressed, for example, "Box holder, Route 1, Bristol, Tenn." This was easier for mailers and also saved the Post Office Department time and money because clerks and carriers did not have to sort each piece — they merely left one in each mailbox.4

In 1928, Congress created a new “bulk rate” category for third-class mail, with rates calculated by the pound rather than by the piece. To qualify for the lower bulk rate, mailers were required to sort and bundle a minimum number of pounds or pieces of mail into state and city destinations before bringing it to the post office. Mailers often saved money by hiring a mail shop or letter shop to do this work for them. 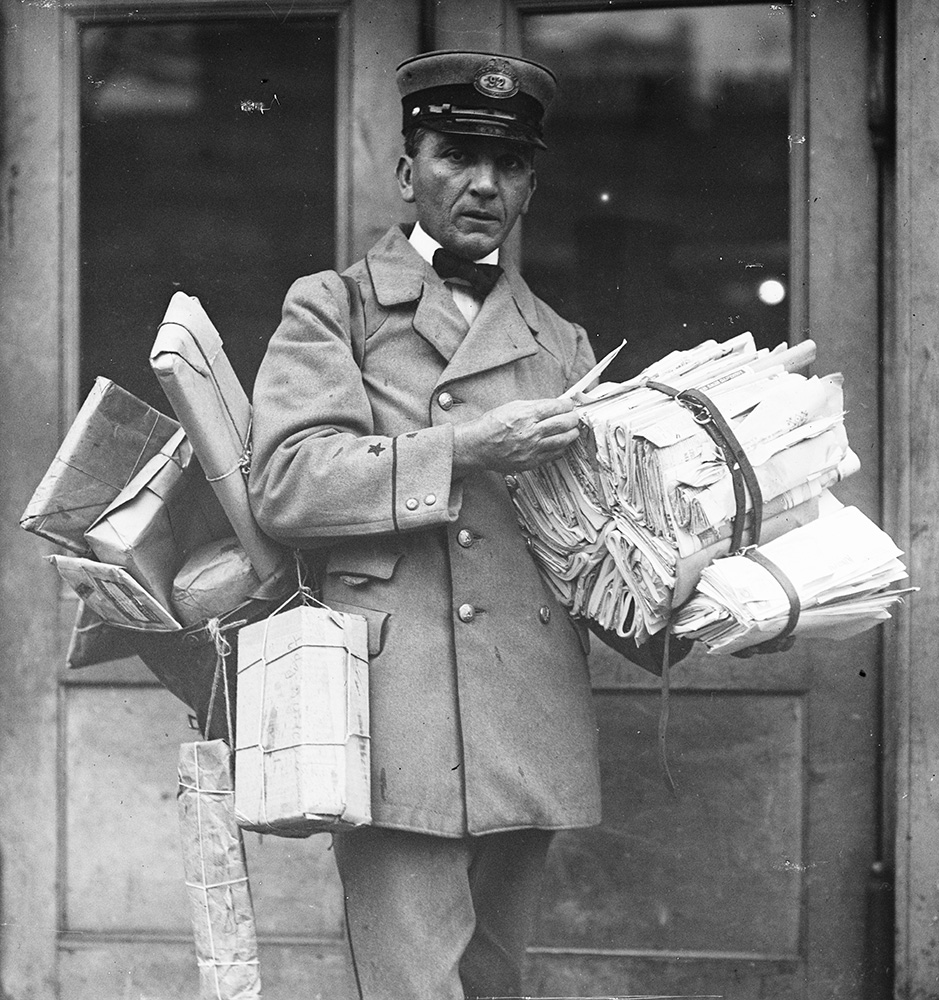 1) Associated Advertising Clubs of America, Annual Convention of the Associated Advertising Clubs of America (Boston: Pilgrim Publicity Association, 1912), 47, hathitrust.org(accessed July 20, 2015). The phrase was an old one — as early as 1854, the British economist George Rickard stated "the luxuries of one generation become the necessaries of the next."

2) In the early 1800s, postmasters could mail newspapers (and letters) for free, while publishers could mail newspapers to each other for free. Postmasters apparently also frequently delivered newspapers to customers without collecting postage, resulting in unintentional free delivery. Because postmasters often did not or could not collect postage from newspaper recipients, Congress mandated prepayment of postage by publishers in 1875. Local newspapers, meanwhile, were delivered postage-free for most of the years between 1845 and 1963. Members of Congress, meanwhile, could send mail postage-free throughout most of the nineteenth century with few or no restrictions, except for during the years 1873 to 1895.

4) Simplified addressing was briefly extended to city addresses in 1934 and 1953, but soon ended under pressure from newspaper publishers. Every dollar that advertisers spent on direct mail was potentially a dollar not spent on newspaper advertising.