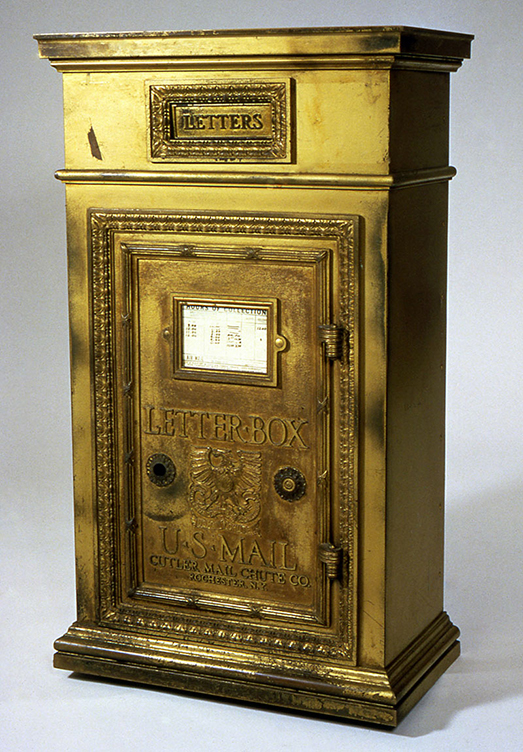 As urban business centers flourished in the 19th century and buildings grew vertically, rather than horizontally in response to growing urban land values, the Post Office Department sought an easier way for occupants to mail their letters. It was more convenient to collect the mail inside the office buildings instead of forcing tenants to deposit their mail in boxes on the street or post offices. The answer was the creation of mail chutes that would extend from the top floor to a receiving box located at ground level.

The first mail chute was installed in the Elwood Building in Rochester, New York in 1884. The experiment was successful and chutes were installed in two New York City office buildings. The first mail chutes were limited to railroad stations and public buildings. By 1905, the postal service allowed mail chutes to be placed in hotels taller than five stories and in apartment houses with more than 50 residential apartments.

This receiving box, which was located at the bottom of the mail chute, was manufactured by James G. Cutler, who received patent #284,951 for his design. which stated that the box must "be of metal, distinctly marked 'U.S. Letter Box,'" and that the "door must open on hinges on one side, with the bottom of the door not less than 2'6" above the floor." If a receiving box was to be placed in a building that was more than two stories high, the bottom of the box was required to be outfitted with an elastic cushion to "prevent injury to the mail."

Mail chutes had to be accessible along their entire length and at least three-fourths glass fronted so that postal workers could easily locate and remove any lodged mail. Congress placed all chutes and subsequent mail matter under the exclusive custody of the Post Office Department in 1893 and made all chute construction work subject to postal regulations. Cutler's company was the sole manufacturer of mail chutes and receiving boxes until 1904. During those 20 years, the company produced more than 1600 receiving boxes, and continued to produce them for several more years. This receiving box was constructed in 1920.

‹ Overcoming Congestion up Screen Wagon ›
Back to Top