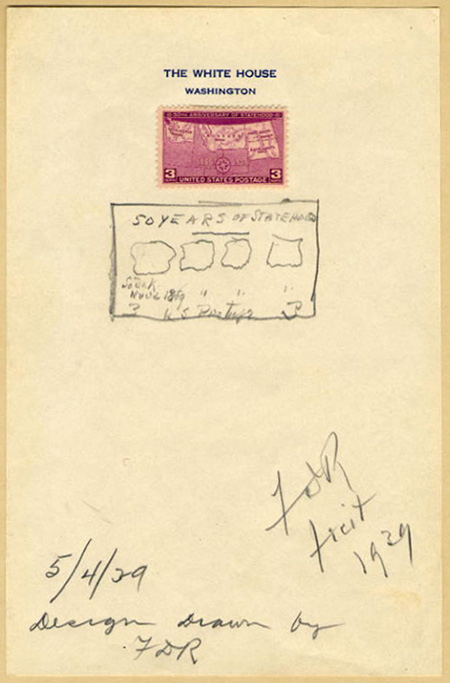 Using a sheet of White House stationery, President Roosevelt sketched a horizontal design captioned "50 Years of Statehood," to celebrate the 50th anniversary of the 1889 admission of Washington, Montana, North Dakota, and South Dakota to the Union. He arranged the four states side by side, with their specific dates of admission directly below. This sketch was signed "FDR FECIT 1939" in the lower right, plus the additional "5/4/39 Design Drawn by FDR" in the lower left. This was, in all probability, the poorest of the President's sketches although the subject of the design was complicated.

Since three of the four states were located on the southern border with Canada, artists at the Bureau of Engraving and Printing elected to show the states in their proper geographical positions, with South Dakota adjoining Montana below North Dakota. At a casual glance, the individual states may have the appearance of laundry hanging from a clothesline - the arched U.S. / Canadian border. Stamp collectors have dubbed this as the "Washline" commemorative.

Design dubbed as the "Washline" commemorative 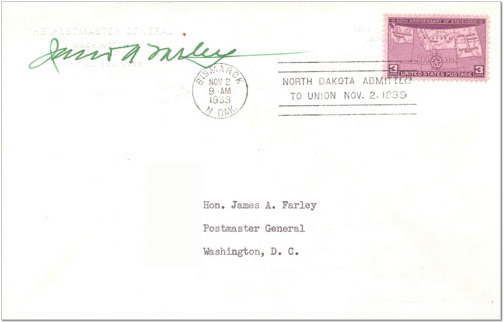 Postmaster General James A. Farley ordered a limited number of autographed first day covers produced on Post Office Department stationery, including this cover that he mailed to himself. Gift of James A. Farley 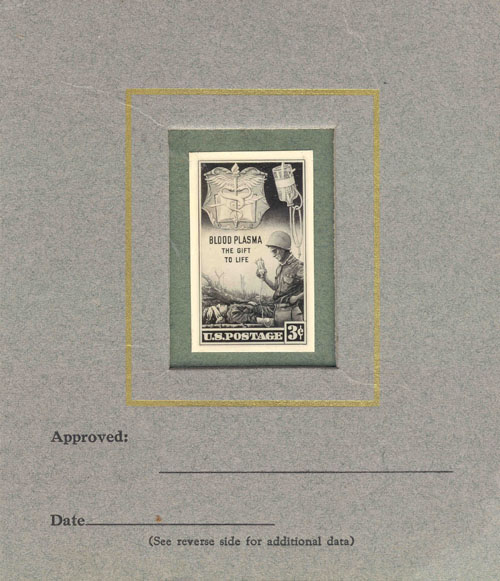 FDR took and active role in reviewing the designs for postage stamps and many designs failed to meet his standards. Although President Roosevelt played no part in the actual design of the proposed "Blood Plasma" stamp that was scheduled to be issued in 1945, he apparently considered this design "too horrific." He vetoed the issuance of the stamp. From this unaccepted model you can judge what the stamp might have looked like had it been produced.