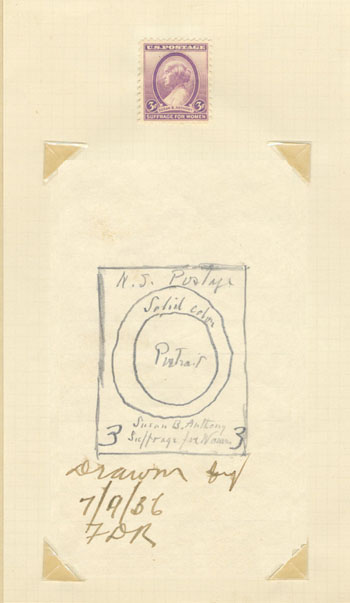 The President's next artistic endeavor came in 1936. When presented with a model for a special stamp honoring women’s-suffrage advocate Susan B. Anthony, President Roosevelt judged that it was too plain. Instead, he sketched this design with a dark oval frame encircling the profile bust on a piece of handy lined paper. On this he scrawled "Drawn by -7/9/36 - FDR."

A heavier oval frame was called for on this design.
Gift of James A. Farley 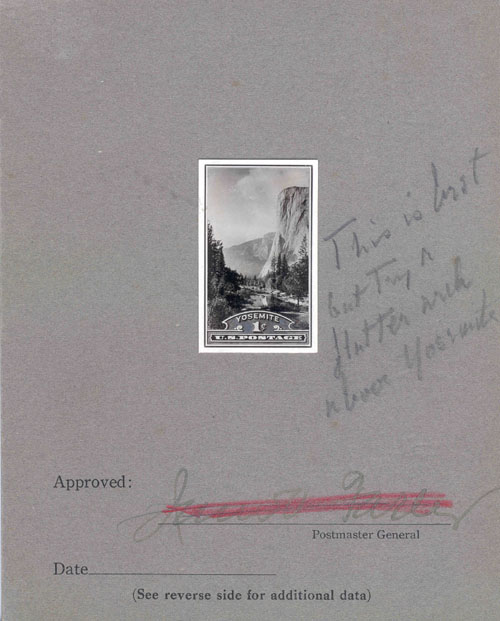 Postmaster General James A. Farley frequently took stamp models, replicas of proposed stamps, to Cabinet meetings and passed them to the President when there was a lapse in conversation. FDR was not shy about expressing his personal thoughts concerning proposed designs. He added his comments to several proposals for the National Parks series of stamps. On the 1-cent Yosemite model he advised: "This is best but try a flatter arch above Yosemite" at the bottom of the stamp. Similarly, when shown the 7-cent Acadia Park model he wrote: "OK. But put the tiny ship on the horizon FDR."