The Allies and the United States marked the end of the war with commendations and parades. Truman recounted readying his artillery battery for review by the commander of the AEF, General John Pershing. Truman, a farmer from Missouri, had earned the respect of officers and enlisted men with whom he fought in the Vosges, Saint Mihiel, and Meuse-Argonne. His troops—largely Irish Catholic immigrants from Kansas City—were eager to go home. So was Truman, who wrote to his fiancée about making wedding plans. 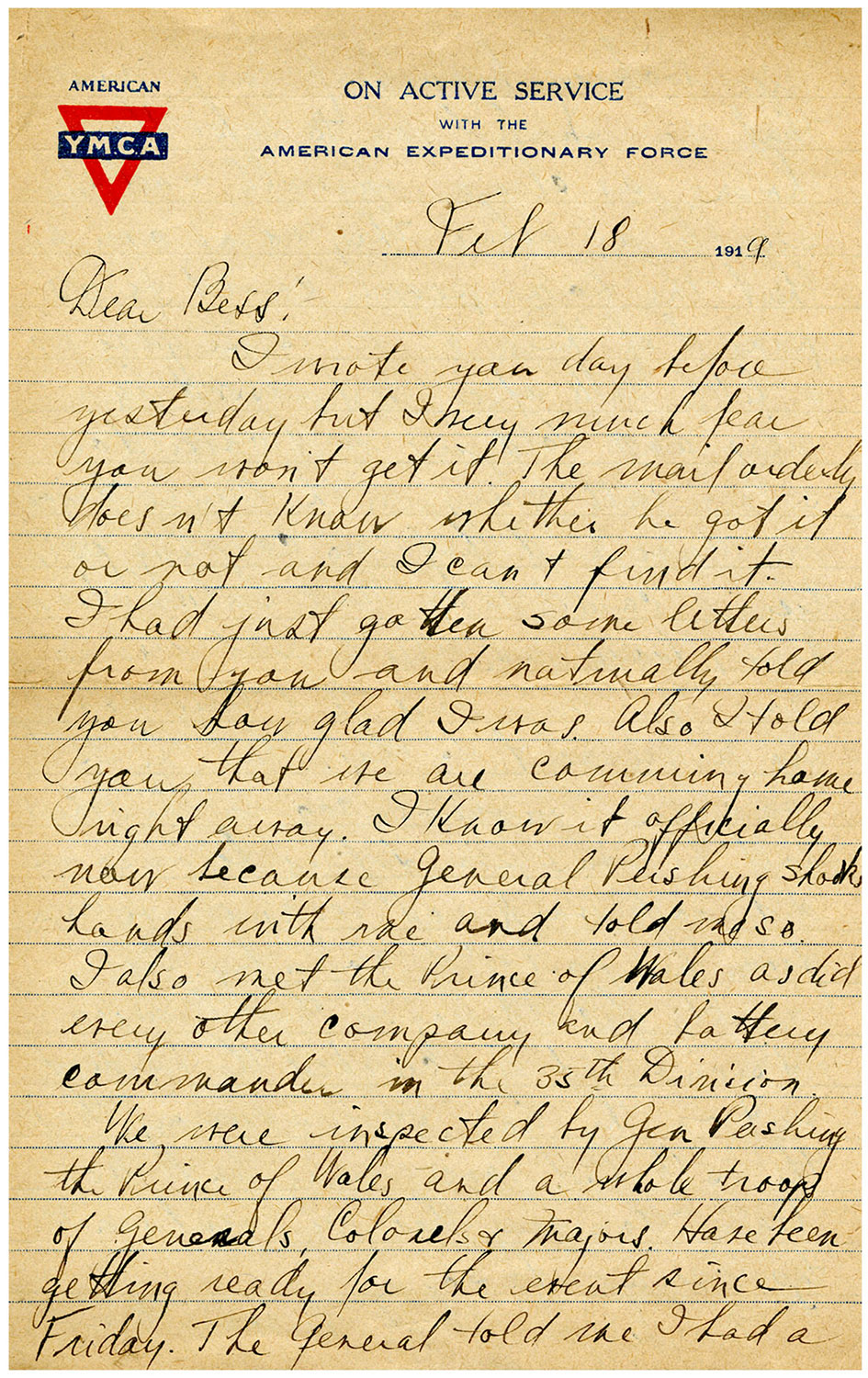 Rosieres, near Bar-le-Duc February 18, 1919 Dear Bess: I wrote you day before yesterday but I very much fear you won't get it. The mail orderly doesn't know whether he got it or not and I can't find it. I had just gotten some letters from you and naturally told you how glad I was. Also I told you that we are coming home right away. I know it officially now because General Pershing shook hands with me--and told me so. I also met the Prince of Wales, as did every other company and battery commander in the 35th Division. We were inspected by Gen Pershing, the Prince of Wales and a whole troop of Generals, Colonels and Majors. Have been getting ready for the event since Friday. The General told me I had a nice looking bunch of men and that he wanted me to take them home as clean morally and physically as when they came over so that the home people could be as proud of them as he is. He gave us a little talk after we'd passed in review and told us we'd covered ourselves with glory in the Meuse Argonne drive and that no carping politician could take that satisfaction away from us. Also he said America won the war and that there was no argument to that. That the 35th was an immense cog in the wheel and he was proud of us because we came from his part of the country. I am mighty glad I belong to that Division. It seems that we cracked the hardest nut on the line. It is a saying that the 35th had more nerve and less brains than any that ever went over the top. I guess it's so.

Maybe you think it wasn't a job to get a battery ready for that inspection. Every helmet had to be painted and stenciled on each side with a Santa Fe cross in red and yellow, every overcoat had to be cleaned and have that same cross sewed on the sleeve. Then packs had to be made exactly alike. We had to take 131 men and of course about 129 of 'em can do things exactly as you tell 'em, but the other two can spoil the whole show.

I had to eliminate and have about six inspections before I could get everyone ready. We made it though and my battery got to stand in front of the whole regiment. I don't know if it was luck or if they looked the best. They looked pretty fine if I do say it as I shouldn't. The regiment was lined up in column of Batteries D, E, F, A, B, C, Hqrs and Supply Co. So I was right out in front. We went over in trucks and of course one of 'em got smashed and part of the men had to walk some distance and the same thing coming back but no one was hurt in any way. I was in charge of the Battalion going over and coming back. The new Colonel gave me a good calling down because I gave Colonel Elliott a public sassing and I guess I deserved it but so did Elliott. The new Colonel is a Regular and he can't see this N.G. lack of cringing when a Colonel or a Lt. Col. comes around. I have an awful bad habit of using a very sharp tongue when one of 'em says something he has no business to me. It doesn't work in play soldiering. You have to say Yes Sir and No Sir and Alright Sir even when you should punch his head. Hence my urgent desire to get back to the farm. There's one or two whom I want to meet when I get on my overalls and they'd better have on their armour.

Of course when the next real fight comes the civilians will come forward just as they did this time and win it in spite of the Regular Army. I have some five statistics for home consumption just as soon as I get out.

I have an Iron Cross for Uncle Strother with a ribbon on it. It came from Coblenty and is a dandy. One of my men got it from a fellow on leave from up there who purchased it from the owner. That of course is not as romantic as to pick it up off the Battlefield of Verdun but all those up there were simply wrecked and the ribbons rotten. This one is as good as new. I guess I'll have to saddle soap it a little to make it look as if it had been worn in battle. Another thing. Please get ready to march down the aisle with me just as soon as you decently can when I get back. I haven't any place to go but home and I'm busted financially but I love you as madly as a man can and I'll find all the other things. We'll be married anywhere you say at any time you mention and if you want only one person or the whole town I don't care as long as you make it quickly after my arrival. I have some army friends I'd like to ask and my own family and that's all I care about, and the army friends can go hang if you don't want 'em. I have enough money to buy a Ford and we can set sail in that and arrive in Happyland at once and quickly.