The giant “X” on this paper is from a chemical test performed by German mail censors looking for secret messages. The US government also monitored Conrad Hoffmann Jr.’s mail and kept a surveillance file on him. The US was suspicious of Hoffmann, an American citizen, because of his German heritage and his work behind enemy lines. He had been in Germany since 1915 as a humanitarian aid worker for the International YMCA inspecting conditions at prisoner-of-war camps. 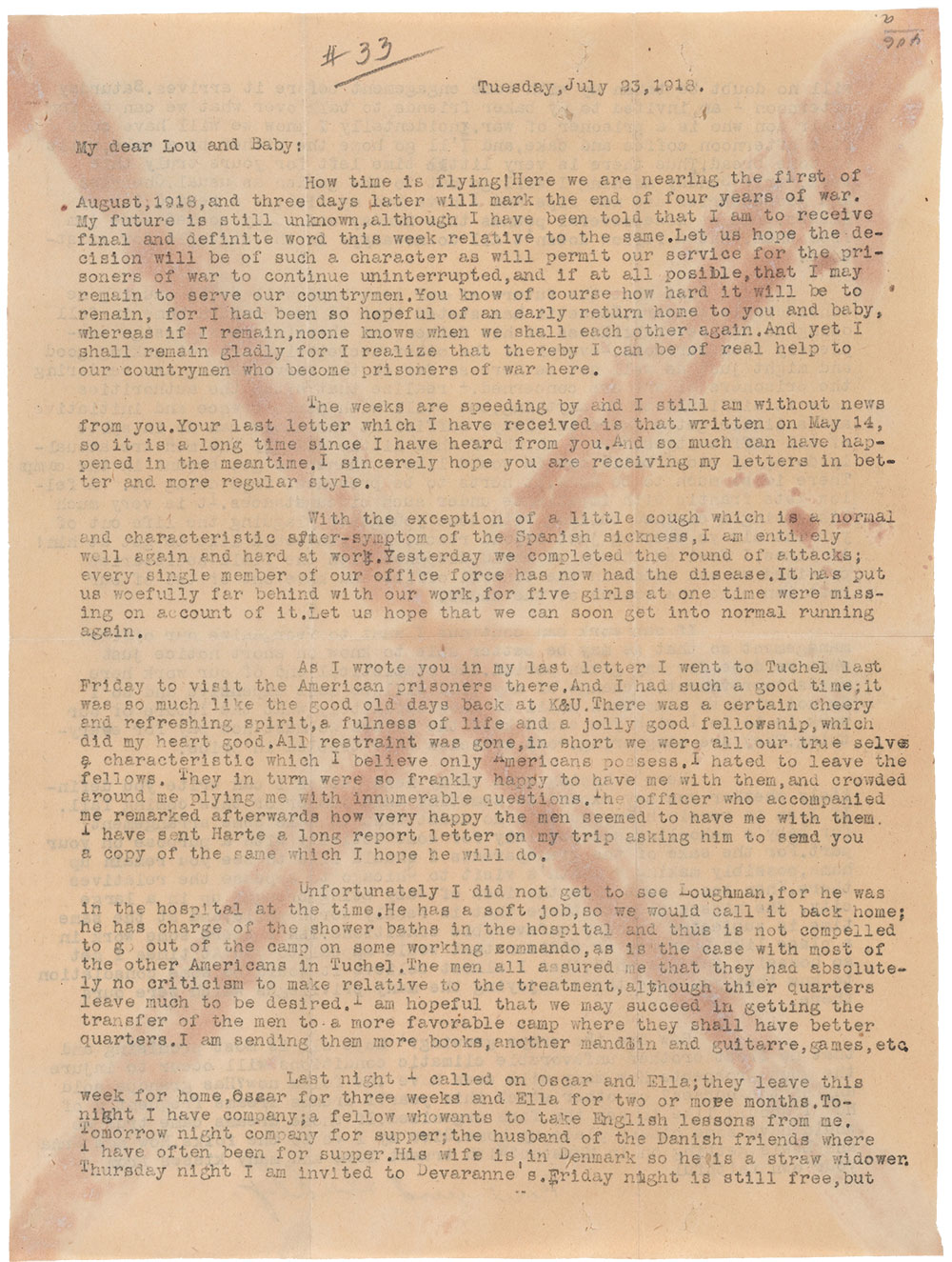 My dear Lou and Baby:

How time is flying! Here we are nearing the first of August, 1918, and three days later will mark the end of four years of war. My future is still unknown, although I have been told that I am to receive final and definite word this week relative to the same. Let us hope the decision will be of such a character as will permit our service for the prisoners of war to continue uninterrupted, and if at all posible, that I may remain to serve our countrymen. You know of course how hard it will be to remain, for I had been so hopeful of an early return home to you and baby, whereas if I remain, noone knows when we shall each other again. And yet I shall remain gladly for I realize that thereby I can be of real help to our countrymen who become prisoners of war here.

The weeks are speeding by and I still am without news from you. Your last letter which I have received is that written on May 14, so it is a long time since I have heard from you. And so much can have happened in the meantime. I sincerely hope you are receiving my letters in better and more regular style.

With the exception of a little cough which is a normal and characteristic after-symptom of the Spanish sickness, I am entirely well again and hard at work. Yesterday we completed the round of attacks; every single member of our office force has now had the disease. It has put us woefully far behind with our work, for five girls at one time were missing on account of it. Let us hope that we can soon get into normal running again.

As I wrote you in my last letter I went to Tuchel last Friday to visit the American prisoners there. And I had such a good time; it was so much like the good old days back at K&U. There was a certain cheery and refreshing spirit, a fulness of life and a jolly good fellowship, which did my heart good. All restraint was gone, in short we were all our true selves a characteristic which I believe only Americans possess. I hated to leave the fellows. They in turn were so frankly happy to have me with them, and crowded around me plying me with innumerable questions. The officer who accompanied me remarked afterwards how very happy the men seemed to have me with them. I have sent Harte a long report letter on my trip asking him to send you a copy of the same which I hope he will do.

Unfortunately I did not get to see Loughman, for he was in the hospital at the time. He has a soft job, so we would call it back home; he has charge of the shower baths in the hospital and thus is not compelled to go out of the camp on some working commando, as is the case with most of the other Americans in Tuchel. The men all assured me that they had absolutely no criticism to make relative to the treatment, although thier quarters leave much to be desired. I am hopeful that we may succeed in getting the transfer of the men to a more favorable camp where they shall have better quarters. I am sending them more books, another mandoln and guitarre, games, etc.

Last night I called on Oscar and Ella; they leave this week for home, Oscar for three weeks and Ella for two or more months. Tonight I have company; a fellow whowants to take English lessons from me. Tomorrow night company for supper; the husband of the Danish friends where I have often been for supper. His wife is in Denmark so he is a straw widower. Thursday night I am invited to Devaranne’s. Friday night is still free, but

[p. 2] will no doubt be taken up with some engagement before it arrives. Saturday afternoon I am invited to my baker friends to talk over what we can do for their son who is a prisoner of war. Incidentally I know we will have some fine afternoon coffee and cake, and I’ll go home the richer by a cake, rolls or some bread. Thus there is very little time left for yours truly this week. Early Sunday morning I will go out to the garden as usual. Cherries and gooseberries are now ripe and I have had my fill, as a reward for my labors. Brought home several pounds this Sunday and today cooked some jam from them. What a fellow doesn’t all do nowadays in the struggle for existence.

Just what the future of our work here will be, is causing me considerable concern. REchaetti has stated that he must return home in fall owing to severe illness of his father and therefore must resign completely from our work. Several of the other secretaries are not making good and might just as well not be here so far as the servicesthey are rendering the prisoners of war are concerned. I realize that often the authorities make it difficult to do anything, but still with perseverance and initiative and a little getup there is always sufficient which one can do in spite of all difficulties. When I think of what little some of the men are actually doing my blood boils; how I would like a chance to get around in the camps There is so much to be done. It hurts to be prevented from doing it. A fellow gets frantic with impatience under such circumstances. It is very much like being a chained bulldog with some youngster plaguing the life out of you but always keeping just beyond reach. How you would like to get at him! At times I feel as though we could dispense with the field secretaries provided we can maintain the central office and have one or two of our best men make the rounds of the camps.

If our work can continue I want to reorganize our office management so that we may be better able to know on short notice just what we done for any given period. The statistical end of our work here needs improvement. A change of any kind will be most expensive and so I do not wish to make such until we know definitely what the future of our work is to be. I wish you could know the prices we must now pay for everything. They are staggering. Most articles have trebled in price.

Here’s hoping that in my next letter I can write you definitely whether you may expect me sometime this summer or this coming fall. If I am to remain here, you will no doubt want to make some arrangement for baby’s schooling, and possibly some activity with a purpose on your part. For the sake of the grandparents I should like to see you remain up home, possibly making a month’s visit to Chicago to appease the relatives there. Then too I don’t like the idea of Baby being brought up in a large city. She misses so much there that is really worth while, and at the same time is subjected to many unfavorable conditions. Isn’t there some work in a place like Lawrence or Madison that would appeal to you? At times I get so homesick for Lawrence, that I almost believe it would be some consolation to knw that you were there enjoying the many privileges which we43 ours there.

How are the crops growing? I hope all is most promising and that no frost orother unfavorable climatic conditions will occur to injure the good prospects. How many milk cows have the folks now? Has grandpa sold any of the horses? or other stock this year? I dream dreams frequently of how I should like to see the farm organized. If those dreams came true we would have some classy place up home. Give my love to the folks. How are Erna and Lewis getting on in Mauston? With truest love and many kisses from your own faithful