Lieutenant Adolf Berle to his father

A trained lawyer and a volunteer in the army, Lieutenant Adolf Berle worked with the American delegation to the peace negotiations. He was frustrated by the delegates’ discussions. He believed that the Allies’ refusal to allow Germany and revolutionary Russia to join the proposed League of Nations would lead to future conflict. He also worried that President Wilson was actively preventing the use of wording that would extend rights and protections to African Americans. 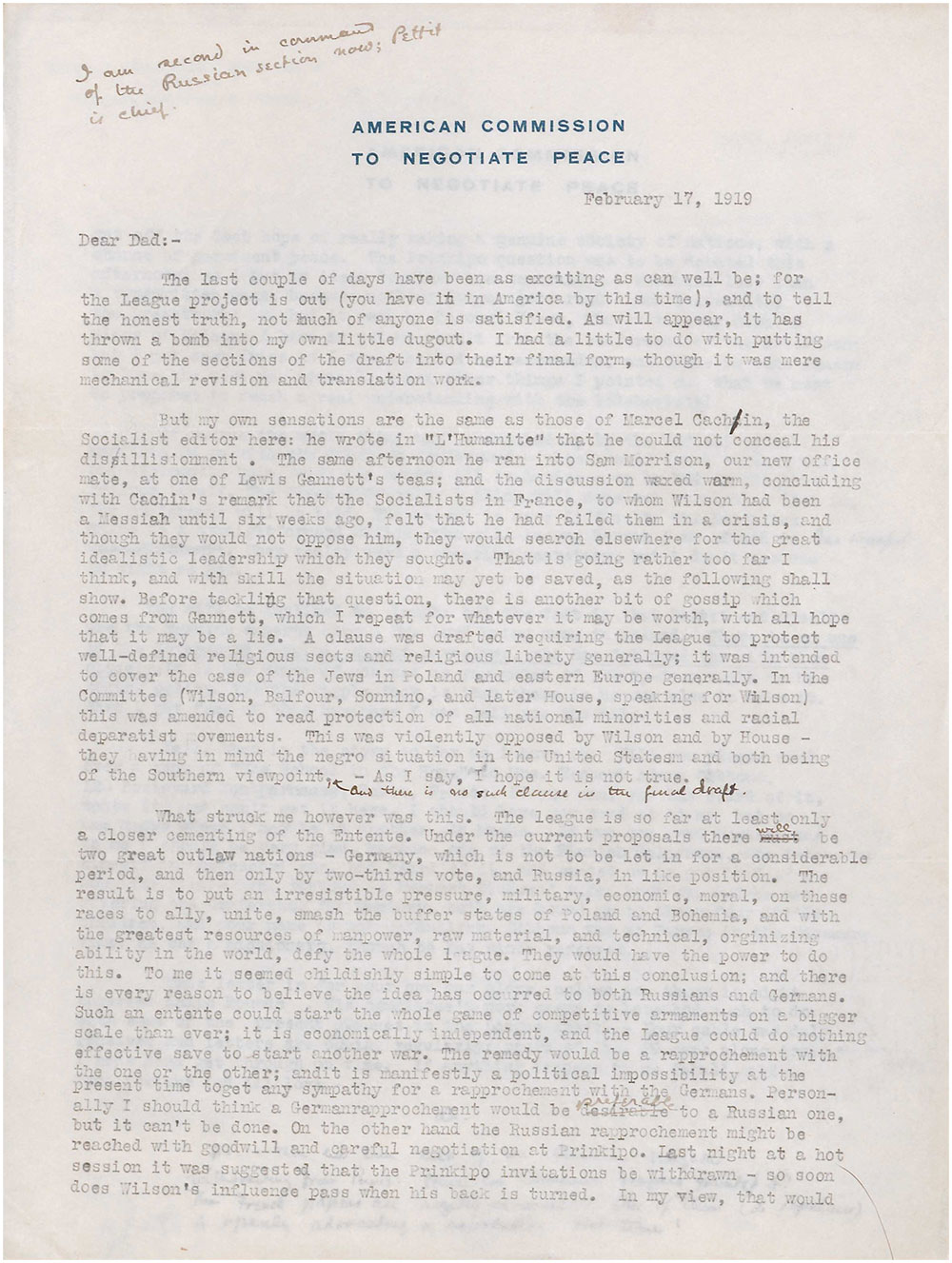 [handwritten] I am second in command of the Russian section now; Pettit is chief.

The last couple of days have been as exciting as can well be; for the League project is out (you have it in America by this time), and to tell the honest truth, not much of anyone is satisfied. As will appear, it has thrown a bomb into my own little dugout. I had a little to do with putting some of the sections of the draft into their final form, though it was mere mechanical revision and translation work.

But my own sensations are the same as those of Marcel Cachin, the Socialist editor here: he wrote in “L’humanite” that he would not conceal his disillisionment. The same afternoon he ran into Sam Morrison, our new office mate, at one of Lewis Gannett’s teas; and the discussion waxed warm, concluding with Cachin’s remark that the Socialists in France, to whom Wilson had been a Messiah until six weeks ago, felt that he had failed them in a crisis, and though they would not oppose him, they would search elsewhere for the great idealistic leadership which they sought. That is going rather too far I think, and with skill the situation may yet be saved, as the following shall show. Before tackling that question, there is another bit of gossip which comes from Gannett, which I repeat for whatever it may be worth, with all hope that it may be a lie. A clause was drafted requiring the League to protect well-defined religious sects and religious liberty generally; it was intended to cover the case of the Jews in Poland and eastern Europe generally. In the Committee (Wilson, Balfour, Sonnine, and later House, speaking for Wilson) this was amended to read protection of all national minorities and racial deparatist ovements. This was violently opposed by Wilson and by House – they having in mind the negro situation in the United States and both being of the Southern viewpoint, [inserted by hand: ‘and there is no such clause in the final draft.’] - As I say, I hope it is not true.

What struck me however was this. The league is so far at least only a closer cementing of the Entente. Under the current proposals there will [crossed out: ‘must’] be two great outlaw nations – Germany, which is not to be let in for a considerable period, and then only by two-thirds vote, and Russia, in like position. The result is to put an irresistible pressure, military, economic, moral, on these races to ally, unite, smash the buffer states of Poland and Bohemia, and with the greatest resources of manpower, raw material, and technical, organizing ability in the world, defy the whole league. They would have the power to do this. To me it seemed childishly simple to come at this conclusion; and there is every reason to believe the idea has occurred to both Russians and Germans. Such an entente could start the whole game of competitive armaments on a bigger scale than ever; it is economically independent, and the League could do nothing effective, save to start another war. The remedy would be a rapprochement with this one or the other; andit is manifestly a political impossibility at the present time to get any sympathy for the rapprochement with the Germans. Personally I should think a Germanrapprochement would be preferable [crossed out: ‘desirable’] to a Russian one, but it can’t be done. On the other hand the Russian rapprochement might be reached with goodwill and careful negotiation at Prinkipo. Last night at a hot session, it was suggested that the Prinkipo invitations be withdrawn – so soon does Wilson’s influence pass when his back is turned. In my view, that would [page break] cut off the last hope of really making a genuine society of nations, with a chance of permanent peace. The Prinkipo question was to be debated this afternoon; so I put my ideas together ina memorandum – somewhat less than a typewritten page, because nothing longer gets read – and I assaulted the breastworks and had it read by Colonel House, who is Viceroy here in place of Wilson. I have as yet no result from the conference of the afternoon; but I put such drive as I could behind my memorandum, and there is some reason to hope the view may prevail. Among other things I pointed out that we must be prepared to reach a real understanding with the Bolshevists!

Of course the whole thing may be smashed up by the refusal of all hands to go on with the Prinkipo conference – which would leave us in a very bad diplomatic hole, with the honors all to Lenine – or by bad handling at Prinkipo itself. The first difficulty I think will come out straight – that is the conference will be held. The second is more difficult; William Allen White is a straightforward citizen who will learn; Herron I am afraid is less hopeful [crossed out: ‘more difficult’]. They really need a steering secretary, but I don’t see one in sight as yet.

You will be inclined to laugh; but the fact is that Pettit and myself are the Russian experts here – Dr. Lord being away in Poland. There is no one in the Government Service, except ourselves, who has followed the situation closely. [underlined in original] It is all wrong of course; no youngster of twenty-four ought to be making policy. But the simple fact is that there is no one else to make it. When I get free of this business I can tell you the tale.

Well, that is the story so far as I have it. Will you please send over a copy of “The School in the Home” to Mrs. Herbert Adams Gibbons, 120 Boulevard Montparnasse, Paris, France, if you can; she has heard of it, wants it, and can’t get it here. I should have you send it to me, but no one knows where I may be in another six weeks. If you can send another one to me I should be very glad, because one of the Finnish delegates, who interests himself in Montessori, etc. had heard of it, and wanted me to get hold of a copy for him. – Mrs. Gibbons is Herbert Gibbons’ wife; both she and he are covering the Conference for Century, both are bound up in their four little children, and your name is not unfamiliar. Gibbons was at Tarsus in the Massacre time; he was a missionary, though he has since reformed.

This letter is for your own ear alone, unless you think it might interest Ralph Rounds. His committee’s work seems to have much to do with some of the present clauses in the League draft. – Your cable was duly received and letters are coming regularly; yours of Jan 29 came along today, [inserted by hand: ‘and Mary Hunter’s’] I hope mine get through on time. If anything happens to me I/shall cable. Good fortune and all love -

[handwritten] P.S. – There has been talk of the American delegate withdrawing form Paris. Have the American papers printed it?

The French papers are rigidly censored. – One of them (Le Populaire) is openly advocating a revolution. Hot times!