The Armistice gave military personnel opportunities to tour Europe. Corporal Carl Saunders traveled with his regiment’s band. In the south of France, he fell ill with spinal meningitis. His last hours were attended by friends and the hotel’s landlady, Madame Armand. She sent this letter to Corporal Saunders’ mother. Compelled by a shared sense of loss, Madame hoped to “soften the bitterness of your grief.” Over 116,000 American service members died in the war, of whom more than half were lost to illness.

Translation reprinted by permission of Andrew Carroll, from: Carroll, Andrew. Behind the Lines: Powerful and Revealing American and Foreign War Letters--And One Man's Search to Find Them. New York: Scribner 2005. 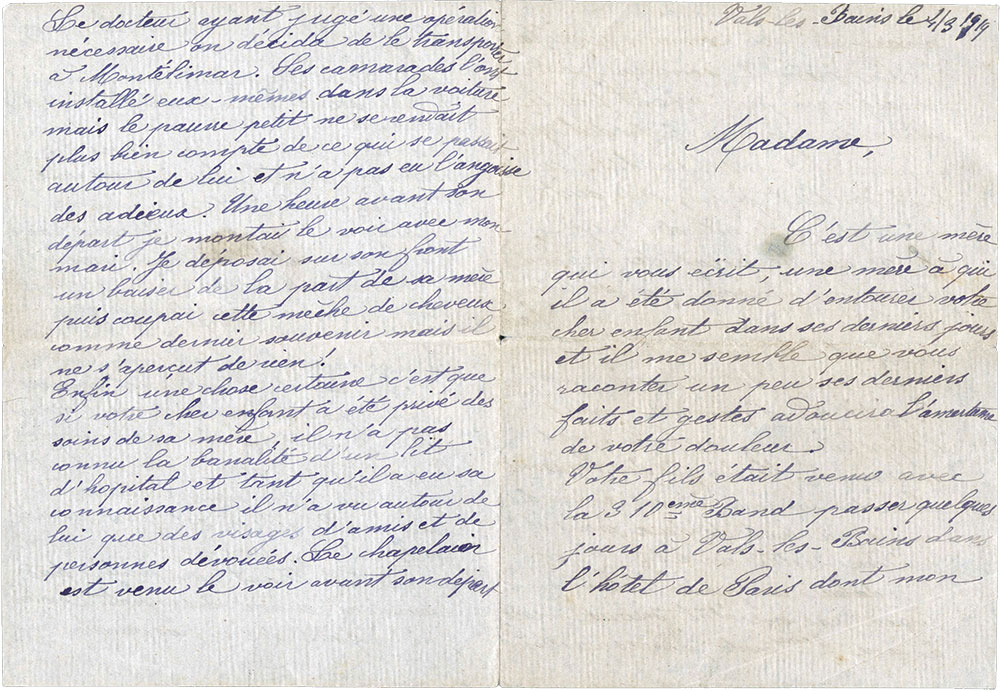 It is a mother who is writing to you, a mother who has been with your dear child in his last days; and it had seemed to me that to tell you a little of his last acts and gestures may soften the bitterness of your grief.

Your son came with the 310th Band to pass a few days at Vals-les-Bains, in the Paris Hotel, of which my husband and I are the proprietors.

The first week I noticed him but little, as they all wore the same uniform; I scarcely distinguished them one from the other. At the end of a week; as a result of an epidemic of grippe, there were many sick in the house who stood about the fireplace, for it was very cold at the time. Then I noticed the little blond, as we called him, not knowing his name. I made hot drinks for him and his comrades, but after two days he preferred to stay in bed. The doctor, at his first visit, did not consider his condition serious, but at a second visit, in reply to my question, he answered, “It is serious, very serious.” It appears that your dear child had a fall two months before on getting upon a train (or truck) and very serious disorder in the vertical column resulted. After this second visit his condition grew worse, though he was without great suffering. The poor little fellow was drowsy and we had to shake him and talk to him to get him to take liquid.

His comrades were admirably devoted and cared for him as no nurse would have done. He was for them a little brother, whom they petted and spoiled to quiet his pain. He was never left alone day or night and when they saw him depart, they wept like children. How I have regretted that I did not speak English! The doctor having decided an operation was necessary, they decide to take him to Montelimar. His comrades put him into the conveyance, but the poor boy no longer knew what was going on about him so was spared the anguish of saying goodbye. An hour before he left, my husband and I went up to see him and I kissed his forehead in his mother’s name, then cut off this lock of hair as a last remembrance, but he noticed nothing.

Well, one thing certain is that though your son was deprived of his mother’s care he did not know the commonplaceness of a hospital bed and so long as he was conscious saw about him the faces of devoted friends. The chaplain came to see him before he left.

The American authorities had his body brought back to the cemetery of Vals-les-Bains, where he rests beside several of his comrades.

When I go to see the graves of my own family, I assure you, Madam, that he will have a visit for his mother’s sake.

If I can be of any service to you I am entirely at your service. With all my sympathies, I am yours,