Sympathetic messages like this arrived at the Frick home in the spring of 1919. Peacetime turned to heartbreak for the Frick family. After surviving battle, Sergeant Edwin Frick had succumbed to pneumonia as a result of the Spanish Flu. The influenza pandemic killed an estimated 25,000 US Army personnel and between 20-50 million people worldwide.
See the exhibition case’s first section for Sgt. Frick’s letter to his mother. 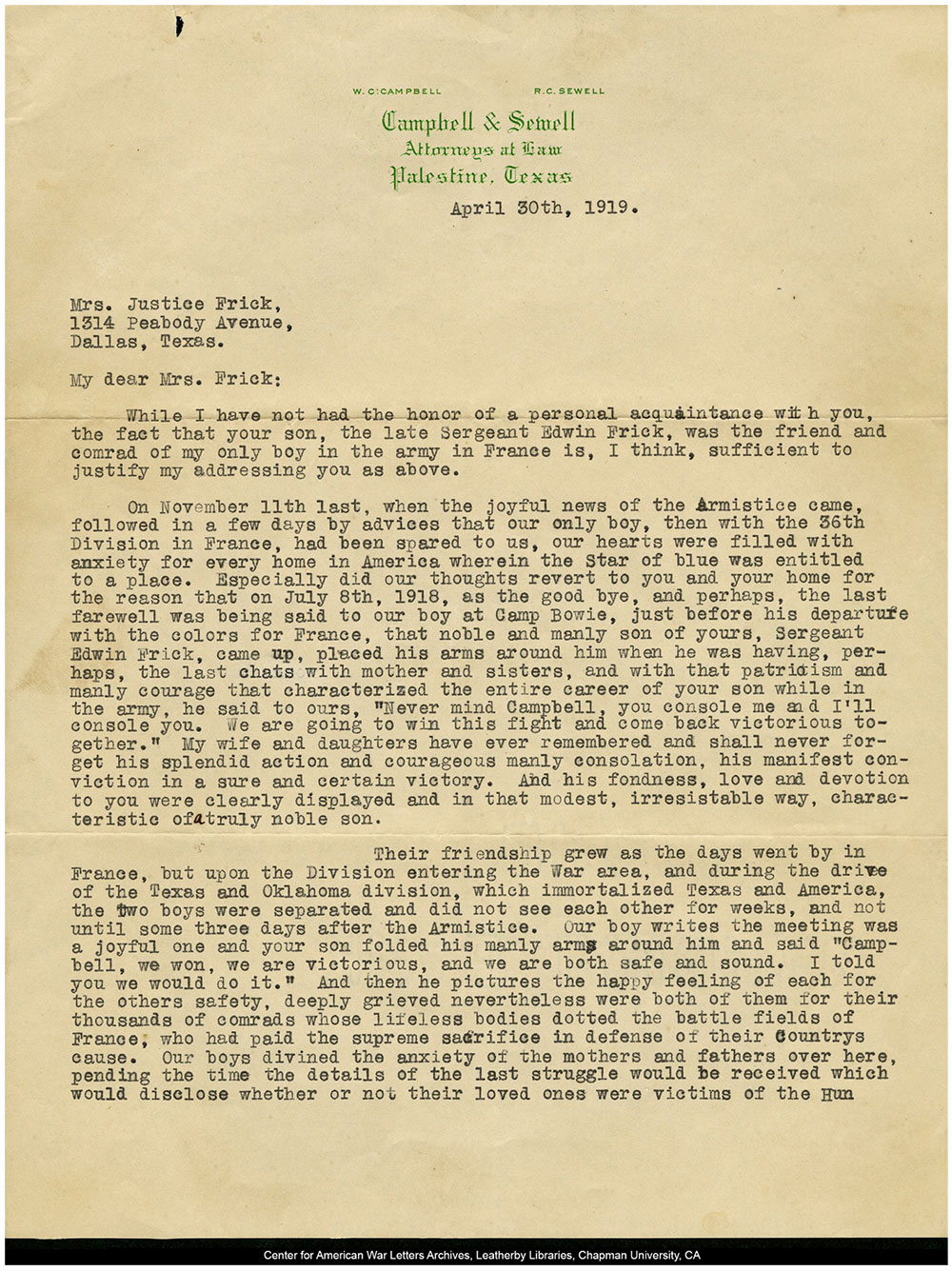 While I have not had the honor of a personal acquaintance with you, the fact that your son, the late Sergeant Edwin Frick, was the friend and comrad of my only boy in the army in France is, I think, sufficient to justify my addressing you as above.

On November 11th last, when the joyful news of the Armistice came, followed in a few days by advices that our only boy, then with the 36th Division in France, had been spared to us, our hearts were filled with anxiety for every home in America wherein the Star of blue was entitled to a place. Especially did our thoughts revert to you and your home for the reason that on July 8th, 1918, as the good bye, and perhaps, the last farewell was being said to our boy at Camp Bowie, just before his departure with the colors for France, that noble and manly son of yours, Sergeant Edwin Frick, came up, placed his arms around him when he was having, perhaps, the last chats with mother and sisters, and with that patriotism and manly courage that characterized the entire career of your son while in the army, he said to ours, “Never mind Campbell, you console me and I’ll console you. We are going to win this fight and come back victorious together.” My wife and daughters have ever remembered and shall never forget his splendid action and courageous manly consolation, his manifest conviction in a sure and certain victory. And his fondness, love and devotion to you were clearly displayed and in that modest, irresistable way, characteristic of a truly noble son.

Their friendship grew as the days went by in France, but upon the Division entering the War area, and during the drive of the Texas and Oklahoma division, which immortalized Texas and America, the two boys were separated and did not see each other for weeks, and not until some three days after the Armistice. Our boy writes the meeting was a joyful one and your son folded his manly arms around him and said “Campbell, we won, we are victorious, and we are both safe and sound. I told you we would do it.” And then he pictures the happy feeling of each for the others safety, deeply grieved nevertheless were both of them for their thousands of comrads whose lifeless bodies dotted the battle fields of France, who had paid the supreme sacrifice in defense of their Countrys cause. Our boys divined the anxiety of the mothers and fathers over here, pending the time the details of the last struggle would be received which would disclose whether or not their loved ones were victims of the Hun [page break] bullet or bayonet. In answer to our boy’s inquiry about how we felt about it, I wrote him these lines as partially expressive of the feeling of some of the mothers and I had you and a few others especially in mind.

The closing scenes were imagined and reviewed, By each fond mother with bended head, While her prayers to God so of’t renewed Increased her faith -, o, her boy wasn’t dead.

She could see him standing in martial array As firm as Gibralter’s mighty head While a phantom’s wand drove danger away. O God, No, her sweet boy wasn’t dead.

Nor was the crown of thorns on his tender brow, Nor the Red Cross bandage on his head. The Angles were safeguarding her boy now No wounds were suffered and he’s not dead.

He’ll soon be home at the old fireside Where the embers glow with such welcome red And regardless of what the future betide He’ll rest one night in mother’s bed.

We want to assure you that when our boy wrote of your son’s death, we were very much grieved and our hearts went out to you in your deep sorrow. We know too well that nothing we could say and nothing our boy could write would completely satisfy or con[handwritten: sole]. We wanted to tell you of our sympathy, of our boy’s fondness for yours, and of his message that he died as he lived, a devoted son, a courageous patriot, and a firm and unselfish friend.

All the details he has written us are that your son was ill but a very short while, developed pneumomia and passed away almost suddenly. We have written him to, if possible, learn the details, if any, and to write to you or us, and if we learn anything further, we shall surely convey the information to you. In the meantime, may we ask you to be consoled with the fact that you are the mother of such a noble boy and unselfish patriot, and that he passed to his reward with a consciousness of duty done, and with all that was mortal of him enshrouded in the stars and stripes. And might not you be assured that his spirit in its flight to that land where war’s dread trump is never heard, passed over your home and paid its homage to mother.

With very great sympathy, I beg to remain, Yours sincerely, [signed] WC Campbell