Courtesy Louise Sophia Schroeder Collection, Gift of Margaret Metcalf, Women’s Memorial Foundation Collection, Arlington, VA
Louise Sophia Schroeder served in the Army Nurse Corps in Allerey, France, for 15 months beginning in March 1918. Her hospital functioned as a transition hospital for casualties. It received a lot of wounded—sometimes 600 a day—from hospitals closer to the front and from prisoner-of-war camps. Once patients were stable, they were sent onward to prepare to return home. Schroeder wrote about her concern over news of the influenza outbreak and shortages in the United States. 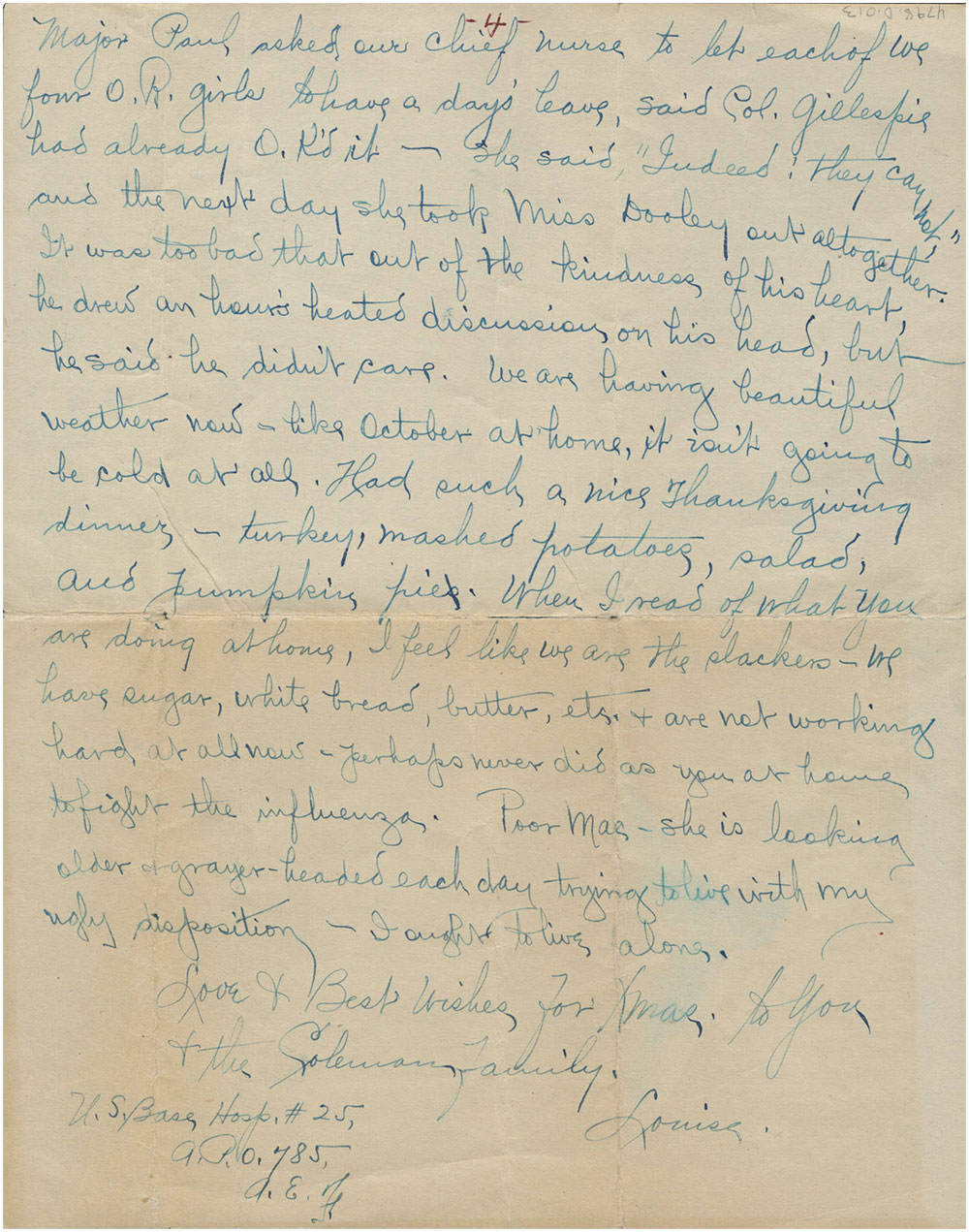 I realize that this will not reach you by December 15, your birthday anniversary, not even by Christmas time perhaps, but you will know that I thought of you just the same and wish you a very happy Christmas – I shall certainly be with all of you in spirit all day, though I am more than glad to be over here where so many of the boys have to be. We are expecting one thousand American boys who have been prisoners in Germany, In on the next trains, all medical cases, consequently, we are emptying some of the surgical wards and making them medical. I think the ban has been taken off now and we can tell more than before. This Base Hospital, center, comprising eleven Base Hospitals, is the largest in France – Bases # 49 -19 -56 -25 -70 -25A -26A -49A -56A -70A -and convalescent camp. At one time we had 22,000 patients – more than

[p. 2] double our capacity, and it is only within the last week or two that the congestion has been noticeably lessened – beds, extra cots rather, have been taken out of the wards and tents. There are three connecting tents back of each ward; the sickest patients are kept in the ward of course, and the overflow must stay in the tents. It was heartbreaking when we came here because there were hundreds of sick boys and absolutely nothing to do with, but now we have a few more supplies and the Red Cross women have a hut and can get cigarettes and chocolate occasionally for the boys. Just think what a Thanksgiving Day Thursday was for us – the most wonderful we have ever known, yet we had absolutely no service of any kind – our chaplain is having a continued vacation – the R.C. women served cocoa in each ward, at 3: PM. and somebody gave an entertainment that evening. I spent all of Wednesday afternoon and part of Thursday making candy for Mac’s ward – her kitchen

[p. 3] boys had been saving a little sugar out of each day’s supply for several weeks – we bought the nuts at Chalon – I made fudge, taffy, and divinity fudge, enough to go around four times to sixty-five patients. Mac said they enjoyed it more than anything else we could have given them. O yes, I had enough for a plate full for my O.R. boys, the X-Ray boys, and I took enough down to Unit #56 for the sixteen Unit F25 boys in the diphtheria suspect ward. We have had a large no. of diphtheria cases, only two of our nurses. The girls begin taking their leave Monday – I would love to be in Paris when Pres. Wilson arrives, there are rumors of his coming here, but goodness, he doesn’t know there is such a place as Allerey. Who do you think I heard from – my blind friend, Barney – I told you about him being in my ward in 26 – he and 28 other blind soldiers are back in the U.S. at a hospital in Maryland, given by a Baltimore woman for that purpose – it was written on a typewriter, full of mistakes, but he says they have school every day and go out walking at night.

[p. 4] Major Paul asked our chief nurse to let each of we four O.R. girls to have a day’s leave, said Col. Gillespie had already O.K’d it – she said “Indeed! They can not,” and the next day she took Miss Dooley out altogether. It was too bad that out of the kindness of his heart, he drew an hour’s heated discussion on his head, but he said he didn’t care. We are having beautiful weather now – like October at home, it isn’t going to be cold at all. Had such a nice Thanksgiving dinner – turkey, mashed potatoes, salad, and pumpkin pies. When I read of what you are doing at home, I feel like we are the slackers – we have sugar, white bread, butter, etc. + we are not working hard at all now – perhaps never did as you at home to fight the influenza. Poor Mac – she is looking older and grayer-headed every day trying to live with my ugly disposition – I ought to live alone.

‹ Alfred Robinson (16th Infantry Regiment), to his mother, November 14, 1918 up Captain Harry S. Truman to his fiancée Bess Wallace ›
Back to Top