Betty Boadway’s message was full of love, humor, and hope for her husband Walter. The couple frequently corresponded. In this early September letter, Betty expressed her support in response to Walter’s criticism of the US Army Air Service and his opinion of the slow and inefficient preparations. Her concerns were not just for him. She struggled with being on her own—she felt frustrated and underappreciated in her volunteer work for the Red Cross. 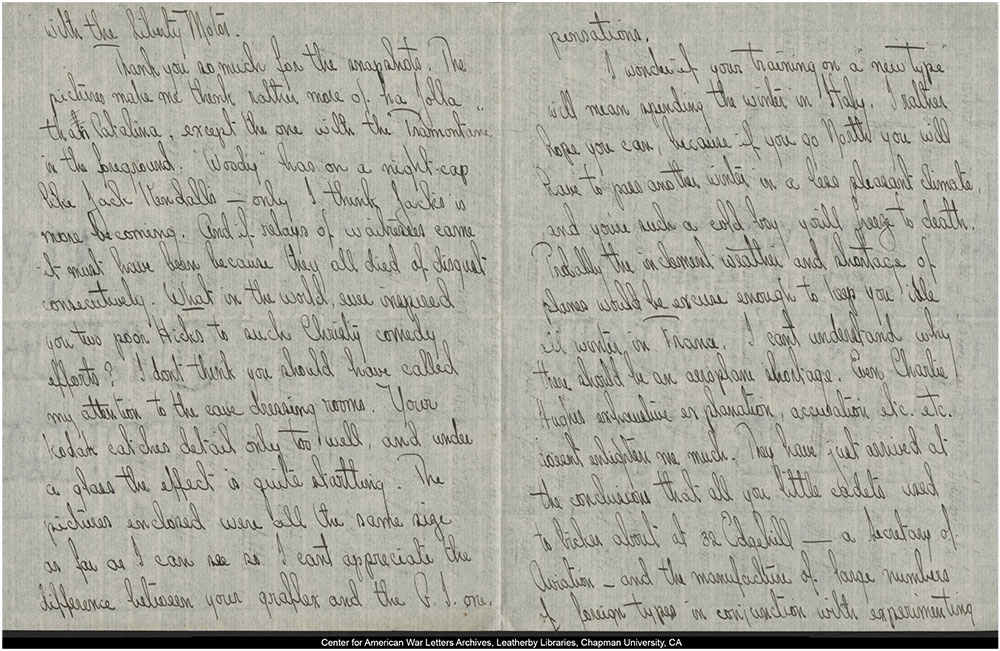 This is a red letter week. Yesterday brought me your letter of August sixth and today brought me two precious missives - the latest one written on August eighteenth. You poor old Sweetheart! I believe I can fully sympathize with you in your impatience with the delays and set backs you have undergone. I think you and I are about equally patient with red tape and the general messiness attendant upon authority and organization! And you [page break] have had malaria to combat, besides! I know just how you feel - you get all emotionally primed to be heroic and if need be to give your life and happiness to put down the Hun banner - you get so elated and invincible that you are ready to lick about eight Germans single handed ____ and a meek little man with chin whiskters and thick glasses takes your name and address and sends you back to polish brass on an obsolete aeroplane. Thats what the Red Cross does to us too – sends us from one department to another until we end in picking lint off from 4 x 4 squares that the doctors “over there” may condescend to [page break] wipe their instruments on, but that more than likely never leave New York on account of being obsolete. There is something wrong somewhere - but “ours not to reason why”! I’m sorry you have been delayed, and delayed - I know how you must hate it - and if you have to be over there, so far away, I could be much more brave and contented if you were doing some good. But you might as well have spent this year at San Diego, as far as “winning the war” [underlined in orginal] is concerned. I had such an amusing letter from Jay Tisher - he is in a Depot Brigade in [crossed out: ‘at’] Kansas, and he is as mad as a hatter. He said “From the looks of the late war news I dont believe I’ll even get over in time to police the battle ground…… I have vague dreams of someday bouncing a little somebody on my knee and having it say “Papa where were you in the war” and having to reply “I was at Funston, doing “squads right.”

Of course your year abroad hasn’t been wasted in any sense of the word. You have met lots of interesting worth-while people, and you have been in much more interesting surroundings than if you had been at Canton - Ohio, for instance. I’m glad for you that you could be among the first to go over, and have the experience of foreign training -- and you would have had the delays and disappointment to contend with here without any com- [page break] pensations.

I wonder if your training on a “new Type” will mean spending the winter in Italy. I rather hope you can, because if you go North you will have to pass another winter in a less pleasant climate and you’re such a cold boy, you’ll freeze to death. Probably the inclement weather and shortage of planes would be excuse enough to keep you idle all winter in France. I cant understand why there should be an aeroplane shortage. Even Charlie Hughes exhaustive explanation, accusation etc. etc. doesn’t enlighten me much. They have just arrived at the conclusions that all you little cadets used to bicker about at 32 Edgehill - a Secretary of Aviation - and the manufacture of large numbers of foreign types in conjunction with experimenting [page break] with the Liberty Motor.

Thank you so much for the snapshots. The pictures make me think rather more of La Jolla than Catalina, except the one with the Tramontane in the foreground. “Woody” has on a night cap like Jack Kendalls - only I think Jack’s is more becoming. And if relays of waitresses came it must have been because they all died of disgust consecutively. What [underlined in original] in the world, ever inspired you two poor Hicks to such Christy comedy efforts? I don’t think you should have called my attention to the cave dressing rooms. Your kodak catches detail only too well, and under a glass the effect is quite startling. The pictures enclosed were all the same size as far as I can see so I cant appreciate the difference between your graflex and the G.I. one [page break] Dad brought over a package of ancient French books, thinking he had something thrilling. They are smelly old things and I’m afraid you will have to explain their merits to me when you come home, because aside from being rather curious they leave me cold [crossed out: ‘rather’]. I just like them because you bought them, and the neat address on the outside of the package thrills me more than all the pages these dead old duffers wrote. I’m afraid I’m rather hopeless - and I’m very prejudiced.

Dad also brought back my little sweetie watch. Have I ever confessed that I had to send it across for repairs the week after it came? The guard chain broke and the wheels just naturally refused to go round as I sent it over to Nocerino. I thought he never underlined in original] would send it back. But now it is ticking away against my wrist in a most companionable way. I am never without it, except in swimming and it is a very dear reminder of your love. At night I love to go to sleep with it pressed close over my heart - because it came to me so far - from you.

It is time to set the table, so I must stop writing and call this a letter. Here is all my love dear - all [underlined in original] - every littlest bit of it - and oh, it’s a very deep, wide, tender love. It would like to wrap around you and kiss away all the worries and discomforts and disappointments that are yours. Dear old Sweet heart of mine - I love [underlined in original] you

‹ Front Line up Betty Boadway to her husband Lieutenant Walter Boadway, September 27, 1918 ›
Back to Top