This message carried love, humor, and hope to Betty’s husband. The couple frequently corresponded, but delayed mail often resulted in mismatched news. In this late September letter, Betty feared for Walter’s health and recurring malaria. She also lamented her struggle as a woman on her own. Like many on the home front, she depended on her husband’s military paycheck. 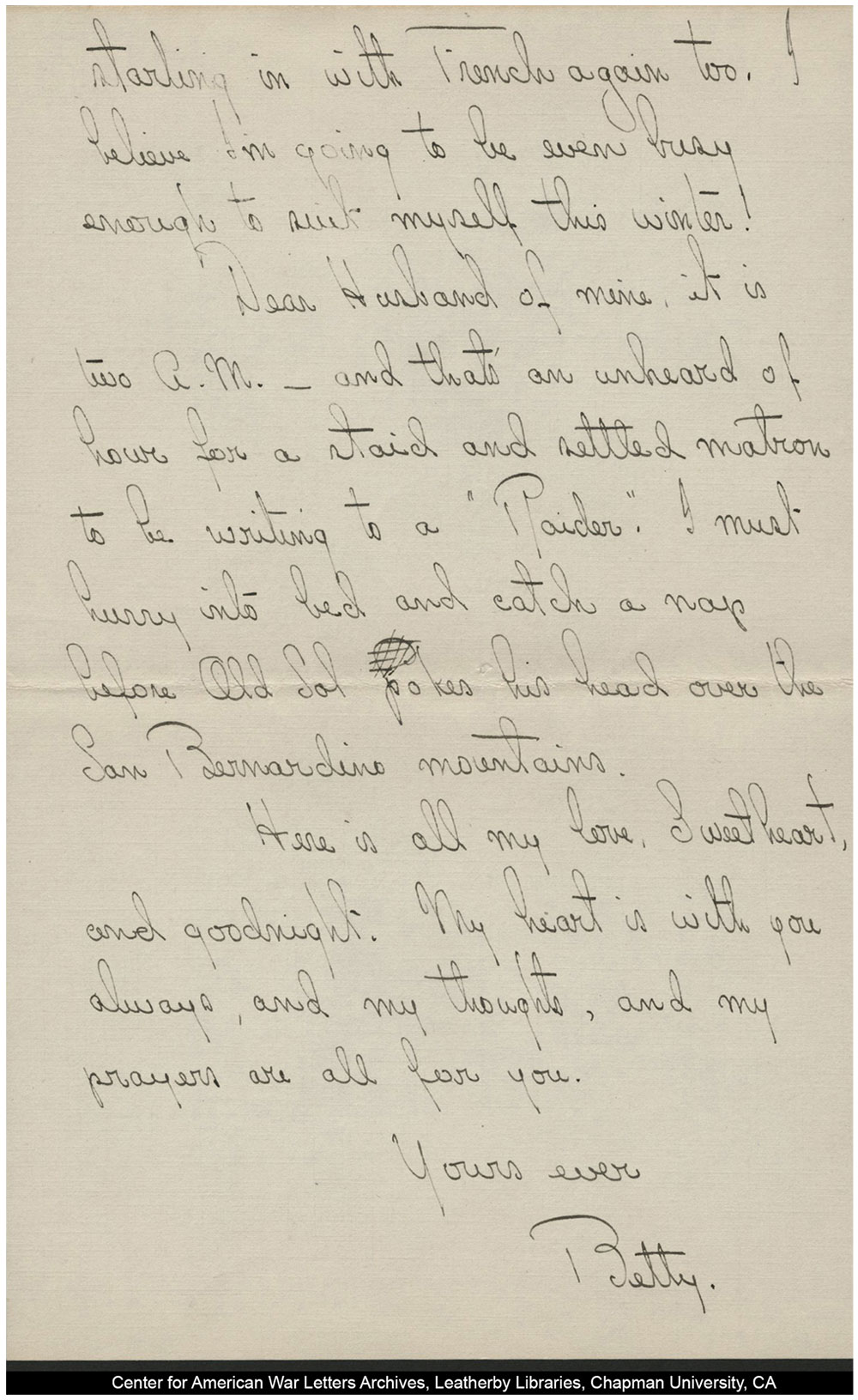 Your letter of August 31 that had been to Avalon and returned, came to-day and I was most joyous to receive it. It has been a long time since I have heard – almost three weeks! – and I only count time by letters. I was afraid perhaps your old enemy malaria, had attacked you on your return to Foggia and put you in the hospital again. I think there must be some letters between [page break] your letter of the eighteenth and this one, so I am hopefully looking forward to tomorrow.

I have had a cheerful day to-day. I have been reading “Under Fire” by Henri Barbusse to begin with. Then came your letter with its enclosure from “Kinney” – and his “casualty list”. Tonight for a bit of cheerful diversion I went up to the Strand to see “Bill Hart” and as a prelim they ran a Pathé Weekly with the military funeral of a Raoul Lufberry, the decoration and final rites of or for another aviator, and the scene after a cyclone in Kansas. And then, to cap the climax it has rained [page break] almost all day.

Wasn’t “Baldy” Carr the one who was going out and get shot so he could go to the hospital and have a beautiful Italian nurse? Too bad be had to wait until he got to France – still, I believe the average idea extant among the stay-at-home Americans is that all Frenchwomen are a cross between Theda Bara and Anita Stewart with the Baroness of Something or Other thrown in for table manners.

One thing that was particularly interesting was Kinney’s remark about the Liberty plane. The Senator from Missouri, and Massachusetts and [page break] Illinois have been raising such a deal of dust that the hag-ridden public doesn’t know that a Liberty plane is in Europe, or even out of the factory. The popular idea – compiled from the Congressional riot, - is that all the planes of American manufacture were scrapped, or else took a tail-spin and were voted “unsafe”. By the way, how does a vrille compare with a tail-spin? It seems to have much the same effect on the pilot!

Did I tell you that I saw a “movie” the other day taken by the Signal Corps of Capt. La Guardia speaking in Florence, and of the backs of many little aviators standing [page break] in a neat little line? I almost fell out of my seat, thinking you might be among them. I feel very guilty and expensive spending all those lires. As nearly as I can figure (I haven’t been to business college yet so if I’m weak on the computation please excuse me) it costs half again as much as the amount for the exchange. How discouraging. Are you paid in Italian currency? I should think the Government ought to provide a means for transferring money – it has a new little law compelling officers to support their wives! I wont sue you for non-support Hon, and I dont want you to make any sacrifices to send me [page break] money. If you were an old pig like H. Herlihy and spent all your salary making yourself into a Mezzanine floor ornament and bragged about it I’d be cross and extravagant and mean. But you are such an old darling about always giving me much more than you really ought that I feel quite like a parasite. Please dear, dont deprive yourself of a simple need or luxury to send me money – because I am near the base of supplies and you are not. And then, if I am very diligent, perhaps by the end of the next six months I will no longer be a non-producer. Dont think that I resent being dependent upon you for everything from shoes to hairpins – it fusses me frightfully [page break] but it thrills me too – oh Buddy, I love you – it isnt that I crave “independence” or any other of the equal rights fetishs, but while you are working so hard, and I cant even sew on your buttons or fluff your pillow or count your laundry, I’d like to be a partner, not a parasite. And wouldn’t it be an added source of egotism to know that your wife lived with you because she adored you, and not because you looked like a bank account? or a meal ticket?

Dear old Sweetie! How I loved to fluff your pillow. It always meant that I could lay my check in the hollow that your dear drowsy [page break] head had made – such a sleepy, rumpled, darling head – looking so dark against the white pillowcase! I used to lie awake and watch you while you slept – your face so pale in the faint light, your hair – so black – and so alive, - your brows so straight and finely drawn, your shadowy eyelids that shut me so definitely away from you, - your tender whimsical, firmly closed mouth – your slim brown hand with the glint where the dim light caught on your ring – oh Sweetheart you are quite maddening when you are asleep! You are so aloof! I want to shake you and wake you up and say: “Buddy [page break] take me with you wherever you go – even to sleep, Dont shut your eyes and leave me all alone! It scares me to have you so near that I can touch you – yet so far away that you have even forgotten my existence!” But instead I would just reach out and touch your hair, oh so softly – and my reward? – a violent flop, a deluge of suffocating covers and a broad expanse of back!

I am going to take Gymnasium at the Y.W.C.A. this winter – it is not Denishaven, but perhaps it will prevent my becoming hopelessly fat and stertorous. I am going to take the aesthetic dancing, not the apparatus I’ll bet my joints squeak! I am [page break] starting in with French again too. I believe I going to be even busy enough to suit myself this winter!

Dear Husband of mine, it is two A.M. – and that’s an unheard of hour for a staid and settled matron to be writing to a “Raider”. I must hurry into bed and catch a nap before Old Sol pokes his head over the San Bernardino mountains.

Here is all my love, Sweetheart, and goodnight. My heart is with you always, and my thoughts, and my prayers are all for you.