Medical personnel arrived in advance of the first American troops who landed in France in late June 1917. The staff of US Base Hospital 21 relieved exhausted British doctors and nurses in Rouen. Writing about the wounded, Chief Nurse Julia Stimson commented that “Human life seems so insignificant,” as she contemplated the challenges of serving thousands while also caring for the individual. Base Hospital 21 would eventually treat over 60,000 patients. 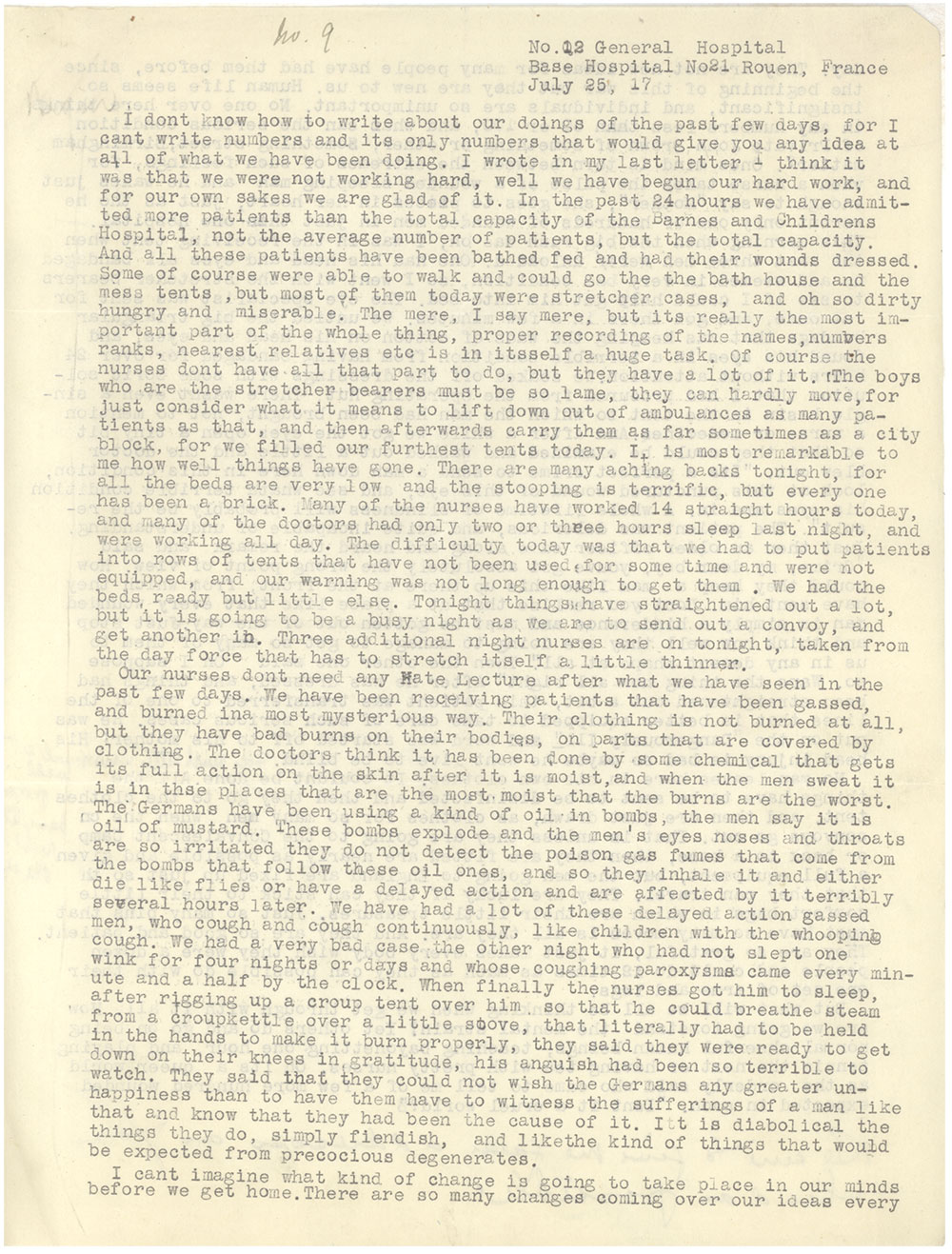 I dont know how to write about our doings of the past few days, for I cant write numbers and its only numbers that would give you any idea at all of what we have been doing. I wrote in my last letter I think it was that we were not working hard, well we have begun our hard work, and for our own sakes we are glad of it. In the past 24 hours we have admitted more patients than the total capacity of the Barnes and Childrens Hospital, not the average number of patients, but the total capacity. And all these patients have been bathed fed and had their wounds dressed. Some of course were able to walk and could go the the bath house and the mess tents, but most of them today were stretcher cases, and oh so dirty hungry and miserable. The mere, I say mere, but its really the most important part of the whole thing, proper recording of the names, numbers ranks, nearest relatives etc is in itsself a huge task. Of course the nurses dont have all that part to do, but they have a lot of it. The boys who are the stretcher bearers must be so lame, they can hardly move, for just consider what it means to lift down out of ambulances as many patients as that, and then afterwards carry them as far sometimes as a city block, for we filled our furthest tents today. It is most remarkable to me how well things have gone. There are many aching backs tonight, for all the beds are very low and the stooping is terrific, but every one has been a brick. Many of the nurses have worked 14 straight hours today, and many of the doctors had only two or three hours sleep last night, and were working all day. The difficulty today was that we had to put patients into rows of tents that have not been used for some time and were not equipped, and our warning was not long enough to get them. We had the beds, ready but little else. Tonight things have straightened out a lot, but it is going to be a busy night as we are to send out a convoy, and get another in. Three additional night nurses are on tonight, taken from the day force that has to stretch itself a little thinner.

Our nurses dont need any Hate Lecture after what we have seen in the past few days. We have been receiving patients that have been gassed, and burned in a most mysterious way. Their clothing is not burned at all, but they have bad burns on their bodies, on parts that are covered by clothing. The doctors think it has been done by some chemical that gets its full action on the skin after it is moist, and when the men sweat it is in thse places that are the most moist that the burns are the worst. The Germans have been using a kind of oil in bombs, the men say it is oil of mustard. These bombs explode and the men’s eyes noses and throats are so irritated they do not detect the poison gas fumes that come from the bombs that follow these oil ones, and so they inhale it and either die like flies or have a delayed action and are affected by it terribly several hours later. We have had a lot of these delayed action gassed men, who cough and cough continuously, like children with the whooping cough. We had a very bad case the other night who had not slept one wink for four nights or days and whose coughing paroxysms came every minute and a half by the clock. When finally the nurses got him to sleep, after rigging up a croup tent over him so that he could breathe steam from a croupkettle over a little stove, that literally had to be held in the hands to make it burn properly, they said they were ready to get down on their knees in gratitude, his anguish had been so terrible to watch. They said that they could not wish the Germans any greater unhappiness than to have them have to witness the sufferings of a man like that and know that they had been the cause of it. It is diabolical the things they do, simply fiendish, and like the kind of things that would be expected from precocious degenerates.

I cant imagine what kind of change is going to take place in our minds before we get home. There are so many changes coming over our ideas every [page break] day. They are not new ideas for many people have had them before, since the beginning of this war but they are new to us. Human life seems so insignificant, and individuals are so unimportant. No one over here thinks in any numbers less than 50 or 100, and what can the serious condition of Private John Brown of something or other, Something street, Birmingham matter? Ones mind is torn between the extremes of such feelings, for when a nurse takes the pulse of a wounded sleeping man and he wakes just enough to say “Mother”, she goes to pieces in her heart, just as tho he werent only one of hundreds of wounded men in just this one hospital. This morning when the big rush was on, I was in the receiving tent when the last three men were unloaded. One had his head and eyes all bandaged up and seemed in very bad condition, so I went with the stretcher bearers to see if I could help get him into bed. The eye specialist was sent for at once, and got there in a few minutes. We untied the big triangular bandage that was keeping the wads of cotton on his head and eyes, and found his eyes in a terrible condition from having bandaged for over 24 hours without attention. We soaked off the dressings with some boric solution that I had procured from the Operating Hut. There wasnt even a single basin in the tent to which the man had been brought, not to mention a nurse or medecines. And after a while we got the eyes open a tiny bit so that they could be examined and washed out a little and the doctor blew out. “Its a perfect crime to send a man down here in this condition, look at this punctured wound of this eye, and see whata terrible condition his eyes are in. A whole lifetime of blindness will probably be the result”. The patient was delerious, and quite incapable of understanding. Just then an older officer came along and heard the remark and said “Crime, my dear boy, youve got absolutely the wrong point of view. How could they keep a man like this up there at the front, from which they have sent him. Dont you realize that at a place like that every wounded man is simply a hinderance and must be gotten out of the way. Just stop and think how well they are doing to manage to get so many of them to us in any decent shape at all”. Then the other one said “Oh I suppose so. Wars the thing now all right” After he was dressed, and things had been straightened out a bit, this patient was transferred to one of the lines that is better equipped to take care of such serious cases. He was put on the “Dangerously Ill” and word was started off to his mother! His head injury is bad so maybe he wont live to be blind. [Handwritten: He much better now and will get well & probably have the sight of one eye.]

No man leaves here in his own clothes. It couldnt be done. All the things have to be sent to be disinfected and then they go to the clothes tent, and then are just drawn, as clothes for so many men when the cn convoys go out. That is unless they are going to the Convalescent Camp or back to a base, then they are fitted are nearly as possible and given a full equipment, but the men going to England are fixed up just so th that they can travel. They are lucky if they can stick to their little comfort bags in which are their little treasures. Just so many pins that must have so many moves is all they are. And they are so good and patient. They are so grateful, it just makes every body wish they were a dozen people and could do 12 times as much as they can possible do with their one set of arms and legs.

But what will we all be thinking when we get through with it all. How are we going to stand the mental strain? Yet others do and go on being normal cheerful human beings, teaching bayonetting one hour, and playing tennis the next or having tea with pretty nurses. Oh its a queer world as the orderly said who came to tell me of a few more hundred wounded expected in soon. “Isnt it a cruel world?”

[Handwritten: Be sure to give me your addresses as far ahead as possible.]