Julia Stimson oversaw the all-female nursing staff of Base Hospital 21. As a leader, she wrote that she believed herself responsible for their physical as well as their moral and emotional well-being. War was brutal and exhausting, and it brought men and women together in ways considered problematic in peace time. The military and the Red Cross made rules to discourage ‘inappropriate’ behavior by and relations between women and men. 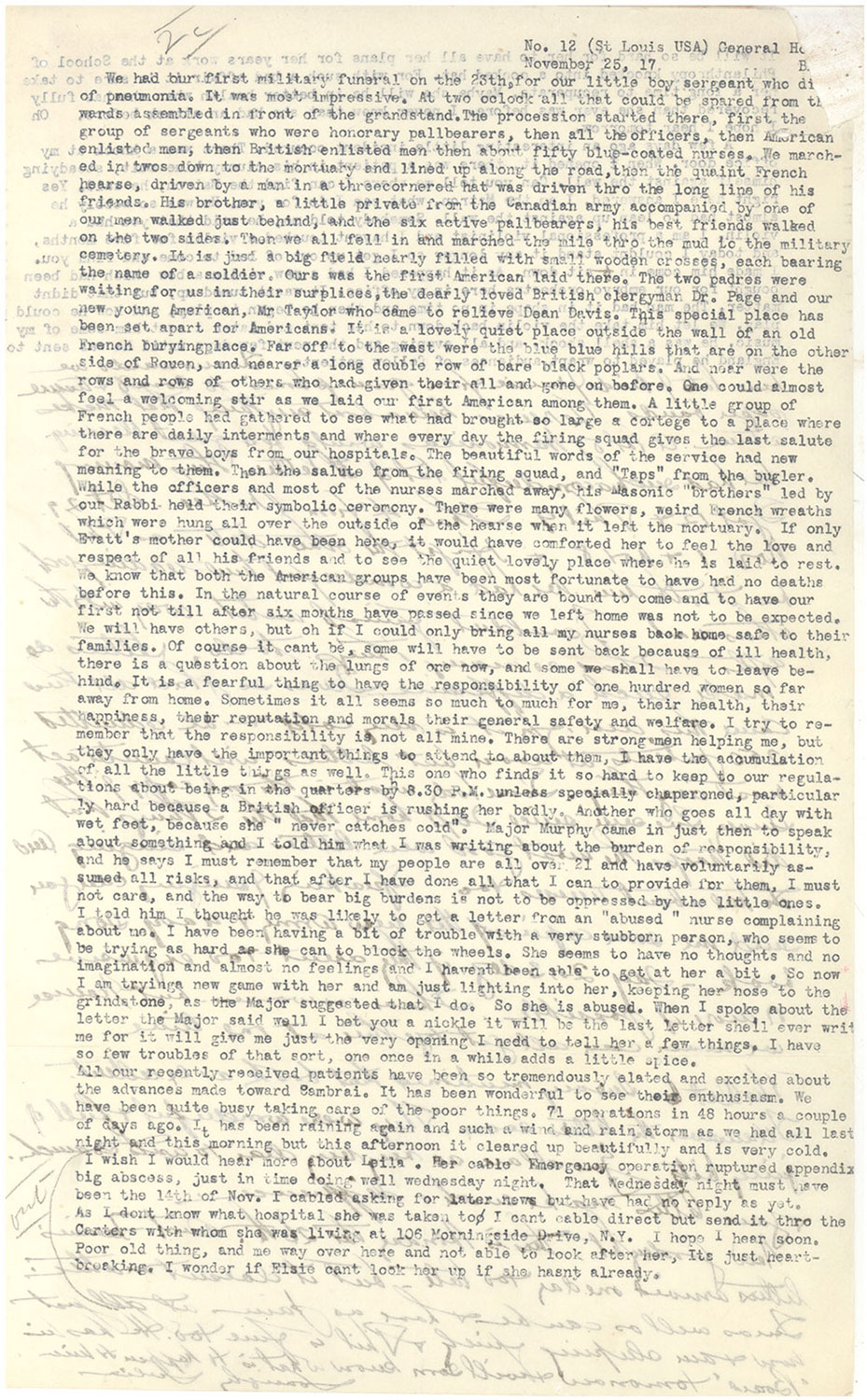 We had our first military funeral on the 23th, for our little boy sergeant who di[ed] of pneumonia. It was most impressive. At two oclock all that could be spared from t[he] wards assembled in front of the grandstand. The procession started there, first the group of sergeants who were honorary pallbearers, then all the officers, then American enlisted men, then British enlisted men then about fifty blue-coated nurses. We marched in twos down to the mortuary and lined up along the road, then the quaint French hearse, driven by a man in a threecornered hat was driven thro the long line of his friends. His brother, a little private from the Canadian army accompanied by one of our men walked just behind, and the six active pallbearers, his best friends walked on the two sides. Then we all fell in and marched the mile thro the mud to the military cemetery. It is just a big field nearly filled with small wooden crosses, each bearing the name of a soldier. Ours was the first American laid there. The two padres were waiting for us in their surplices, the dearly loved British clergyman Dr. Page and our new young American, Mr Taylor who came to relieve Dean Davis. This special place has been set apart for Americans. It is a lovely quiet place outside the wall of an old French buryingplace. Far off to the west were the blue blue hills that are on the other side of Rouen, and nearer a long double row of bare black poplars. And near were the rows and rows of others who had given their all and gone on before. One could almost feel a welcoming stir as we laid our first American among them. A little group of French people had gathered to see what had brought so large a cortege to a place where there are daily interments and where every day the firing squad gives the last salute for the brave boys from our hospitals. The beautiful words of the service had new meaning to them. Then the salute from the firing squad, and “Taps” from the bugler. While the officers and most of the nurses marched away, his Masonic “brothers” led by our Rabbi held their symbolic ceremony. There were many flowers, weird French wreaths which were hung all over the outside of the hearse when it left the mortuary. If only Evatt’s mother could have been here, it would have comforted her to feel the love and respect of all his friends and to see the quiet lovely place where he is laid to rest. We know that both the American groups have been most fortunate to have had no deaths before this. In the natural course of events they are bound to come and to have our first not till after six months have passed since we left home was not to be expected. We will have others, but oh if I could only bring all my nurses back home safe to their families. Of course it cant be, some will have to be sent back because of ill health, there is a question about the lungs of one now, and some we shall have to leave behind. It is a fearful thing to have the responsibility of one hundred women so far away from home. Sometimes it all seems so much to much for me, their health, their happiness, their reputation and morals their general safety and welfare. I try to remember that the responsibility is not all mine. There are strong men helping me, but they only have the important things to attend to about them, I have the accumulation of all the little things as well. This one who finds it so hard to keep to our regulations about being in the quarters by 8.30 P.M. unless specially chaperoned, particularly hard because a British officer is rushing her badly. Another who goes all day with wet feet, because she “never catches cold”. Major Murphy came in just then to speak about something and I told him what I was writing about the burden of responsibility, and he says I must remember that my people are all over 21 and have voluntarily assumed all risks, and that after I have done all that I can to provide for them, I must not care, and the way to bear big burdens is not to be oppressed by the little ones. I told him I thought he was likely to get a letter from an “abused” nurse complaining about me. I have been having a bit of trouble with a very stubborn person, who seems to be trying as hard as she can to block the wheels. She seems to have no thoughts and no imagination and almost no feelings and I havent been able to get at her a bit. So now I am tryinga new game with her and am just lighting into her, keeping her nose to the grindstone, as the Major suggested that I do. So she is abused. When I spoke about the letter the Major said well I bet you a nickle it will be the last letter shell ever writ me for it will give me just the very opening I need to tell her a few things. I have so few troubles of that sort, one once in a while adds a little spice.

All our recently received patients have been so tremendously elated and excited about the advances made toward Cambrai. It has been wonderful to see their enthusiasm. We have been quite busy taking care of the poor things. 71 operations in 48 hours a couple of days ago. It has been raining again and such a wind and rain storm as we had all last night and this morning but this afternoon it cleared up beautifully and is very cold.

I wish I would hear more about Leila. Her cable Emergency operation ruptured appendix big abscess, just in time doing well wednesday night. That Wednesday night must have been the 14th of Nov. I cabled asking for later news but have had no reply as yet. As I dont know what hospital she was taken to I cant cable direct but send it thro the Carters with whom she was living at 106 Morningside Drive, N.Y. I hope I hear soon. Poor old thing, and me way over here and not able to look after her, Its just heartbreaking. I wonder if Elsie cant look her up if she hasnt already. [page break] It will be so hard for her to have all her plans for her years work the School of Philanthropy knocked into a cocked hat. For with such a bad affair it is sure to take her a long time to recuperate. Maybe she will be in better health when she has fully recovered than she ever was before. I never knew that she had an attack before. Oh I hope I hear tomorrow.

A few days ago an interesting little incident occured. There was a knock at my office door. When I opened it, there was a patient in his clumsy blue suit, steadying himself against the wall. Can you tell me where I can find the Matron, he said. Yes right here I answered, I am the Matron what can I do for you. He was so wobbly he almost had to lean up against the wall. Somebody told me, he said that you had a violin. I am a professional violinist and I havent touched a violin for five months, and today I couldnt stand it any longer so I got up out of bed to come and find you. I made him come in [Handwritten: &] sit down. As it happened I had a new violin a bow which had been bought for our embryo orchestra here in my office. It wasnt tuned up, but that didnt matter. The man had it in shape in no time and then he began to play, and how he could play. We let him take the violin back down to his tent and later I sent him some of my music. He was a shell shock, and all evening and the next few days until he was sent to England he played to wrapt audiences of fellow patients. [Handwitten: In our wards we have lots of kinds of music from gramophones to comb & tissue paper bands. The men are keen about anything that makes a tune. A lot of harmonicas would be a great blessing. We had such a wonderful lot of letters this morning. I got 12 & Phil 9. I had 4 from Mother. Oct 29 Nov 1 & Nov 8 & I forget the other date as Phil has it with him. We had a wonderful time reading each others mail. I couldn’t finish until way into the after. I had so many things to do. Letters do make such a difference. I was so glad all these came this ‘am’ for it is very cold and we admitted 250 patients at noon but letters will counteract most anything. Somebody wrote in the only copy of the [illegible word] I’ve seen since I left home that the 2 things that did troops the most good were letters and singing and its true about nurses too. Speaking of singing can you send me some copies of the new army and navy song book – say 2 or 3 doz if they aren’t too expensive or more if possible. I have 100 women but of course we never can all get together at one time. The Oct 6 survey mentioned that book as excellent. Ill answer the letters soon. They were wonderful & full of juicy bits. You all are so very very dear to write so much & your letters make such a difference.

Now goodnight. This is Monday the 26th. Aunt Fannie’s letters arrived one day too late but it doesn’t matter. Im as well as can be and have no pain at all just now & am sleeping finely & Phil is fine too. He has his “Board” tomorrow & will soon know what is to happen to him.

‹ Chief Nurse Julia Stimson, to her family , July 25, 1917 up Sarah Thornton to her husband Private James Edgar Thornton ›
Back to Top