George Patton wrote home after being hospitalized for more than a month with a leg wound he received in the Meuse-Argonne Offensive. From a family with a proud history of military service, Patton had traveled to Europe as a member of General Pershing’s staff. He spent late 1917 and all of 1918 learning about tanks. Tanks were a new technological development that enabled forces to more easily cross enemy trenches. Patton commanded the first American tank brigade to go into combat. 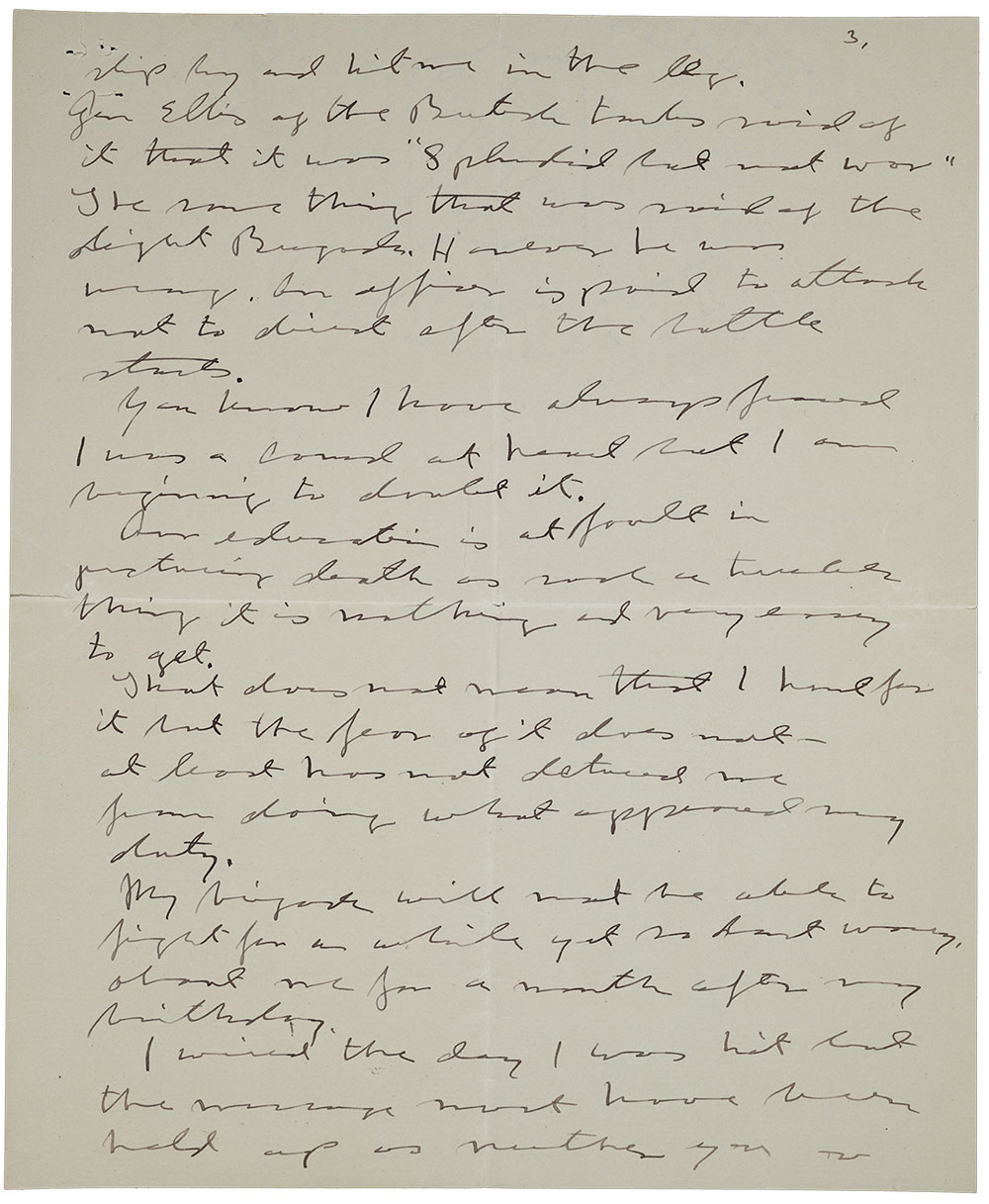 Your letter of Sept 28 has just handed me and as usual was most interesting. But instead of being in the fight as you thought I was in a hospital with a whole bath towel stuffed in my bottom and bleeding like a stuck pig. Still as usual at such times I slept which was the best thing to do.

I left the hospital to day and regained command of my brigade or what is left of it. I am here in my own room and feeling fine though I can’t walk much yet and have lost about 30 pounds of weight which I will soon get back.

My letter written from St. Mihiel will have reached you by now. You and I out did the papers I rode on top of the tank not the tail and so riding I mopped up a town – PANNES which the infantry would not enter [page break] later as I wrote you I got shot off the top of it by the bosch but was not hurt, only scared.

Every one has been telling me what a killer I am for the Verdun-Argonne show that I am beginning to believe it. But if I had not thought of you and Mom + B and my ancestors I would never have charged. That is I would not have started for it is hell to go into rifle fire so heavy that one fancies the air is thick like molasses with it, After I got going it was easy but the start is like a cold bath.

Maj. Brett who has been in all the while says that was the heaviest fire of the whole battle. They were 12 M.G. rifle in front of me at about 150 yds. Bashed by a battalion of guard infantry. Which while from fifty to 150 machine guns and firing at us from the flanks. My “guardian spirits” must have had a job to keep me from getting killed so we can’t blame them for letting me [page break] slip by and hit me in the leg.

Gen Ellis of the British tanks said of it that it was “Splendid but not war” The same thing that was said of the Light Brigade. However he was wrong. An officer is paid to attack not to drink after the battle starts.

You know I have always feared I was a coward at heart but I am beginning to doubt it. Our education is at fault in picturing death as such a terrible thing it is nothing and very easy to get. That does not mean that I hunt for it but the fear of it does not – at least has not deterred me from doing what approved my duty.

My brigade will not be able to fight for a while yet so don’t worry, about me for a month after my birthday.

I wired the day I was hit but the message must have been held up as neither you or [page break] B seem to have heard of it.

My classmates are all sore as hell at me for getting promoted and probably lay it to Nita or some other hellish plot.