After months practicing at an Italian airfield, Walter Boadway qualified as a pilot. Although Boadway had prior experience with flying, he needed to learn about combat. The Americans received training from experienced British, French, and Italian counterparts. Flying was a common topic for Boadway and his wife. In this letter, he shared his joy in the thrill of flight. He did sometimes complain. As an officer who censored his own mail, he could write relatively freely about his opinions and experiences. 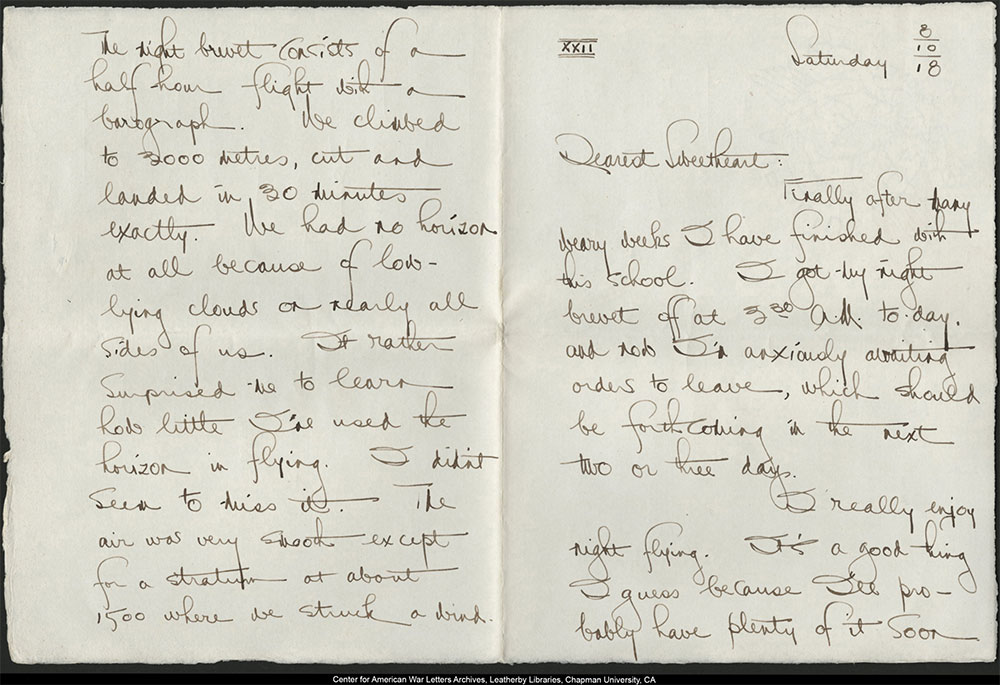 Finally after many weary weeks I have finished with this school. I got -my- night brevet off at 330 A.M. to-day, and now I’m anxiously awaiting orders to leave, which should be forthcoming in the next two or three days.

I really enjoy night flying. It’s a good thing I guess because I’ll probably have plenty of it soon [page break] The night brevet consists of a half-hour flight with a barograph. We climbed to 3000 metres, cut and landed in 30 minutes exactly. We had no horizon at all because of low-lying clouds on nearly all sides of us. It rather surprised me to learn how little I’ve used the horizon in flying. I didn’t seems to miss it. The air was very smooth excecpt for a stratum at about 1500 where we struck a wind. [page break] And it was quite cold. My ‘ittle nose runned and runned. For the first time since April I wore gloves in flying. The camp lights showed up quite plainly at 3000 but we could see nothing else below and around us. Overhead were the stars, and more than once a shooting star gave me a start. Coming down a lost 1500 metres altitude in a spiral then headed for the landing field in a straight glide. It sure had me guessing. One minute I’d think I was going to overshoot and the next I’d put my hand on the throttles for a little boost. As it was I kept to my glide and came in just right.

I got in bed about 4 and woke up at 10. I’ve felt sleepy as the deuce all day but try as I could I wasn’t able to catch a nap this afternoon. [page break] I could almost get to sleep but not quite I’ve got to be up until 10,30 too because I’m Officer of the Day again and have to make an inspection of the enlisted men’s barracks after taps. And worst of all I’ve got to get up at 7 a.m. to blow reveille on my whistle. OR! it’s a hard life.

In an Alumni Weekly I just received there’s a notice of a Scribner book entitled “Holder Tower [page break] and the New Dining Halls - Princeton University”. It has 28 pictures some of which I’ve seen and they’re remarkable good. It might be a tome worth having.

I’m sending you another bundle of junk today. It’s my membership “diploma” in the Aero Club d’Italia. We’re members for ten years. I don’t know what it’ll get us do you? Except that the “diploma” will make a fine bath-room picture.

When are you going [page break] to send me that series of “the day of the week”? I hope you send me lots of pictures from Avalon. They’re a joy and a treasure. It’s about the nearest to seeing you that I can attain you know. So please send me lots of snap-shots. I’ll try to do the same by you if you wish although I hate to face a camera.

Wish I could celebrate the completion of my training with you tonight. Oh I wish I could just see you and talk with you for a few minutes at least. Dearest girl that I love, little advertisements in magazine showing kitchens and houses and gardens and tinware and rolling pins fill me with homesickness. Most of the time I accept the present and think of no other existence. It’s easier. But often I dream of home, the home we’ll make if God wills. With all my love, Buddy