Louise Hoffmann to her husband Conrad

The US Military Intelligence Division’s surveillance of Conrad Hoffmann Jr. extended to his wife Louise’s correspondence. Her husband had been in Germany since 1915 as a humanitarian aid worker for the International YMCA inspecting conditions at prisoner-of-war camps. The monitoring of the Hoffmanns’ mail caused delays and sometimes letters went missing. American military inspectors copied Louise’s letter and placed this excerpt in the official investigation file. Louise hoped this letter would reach Conrad, but regulations were against her. US mail service to Germany had been officially suspended on April 7, 1917, the day after the United States declared war. 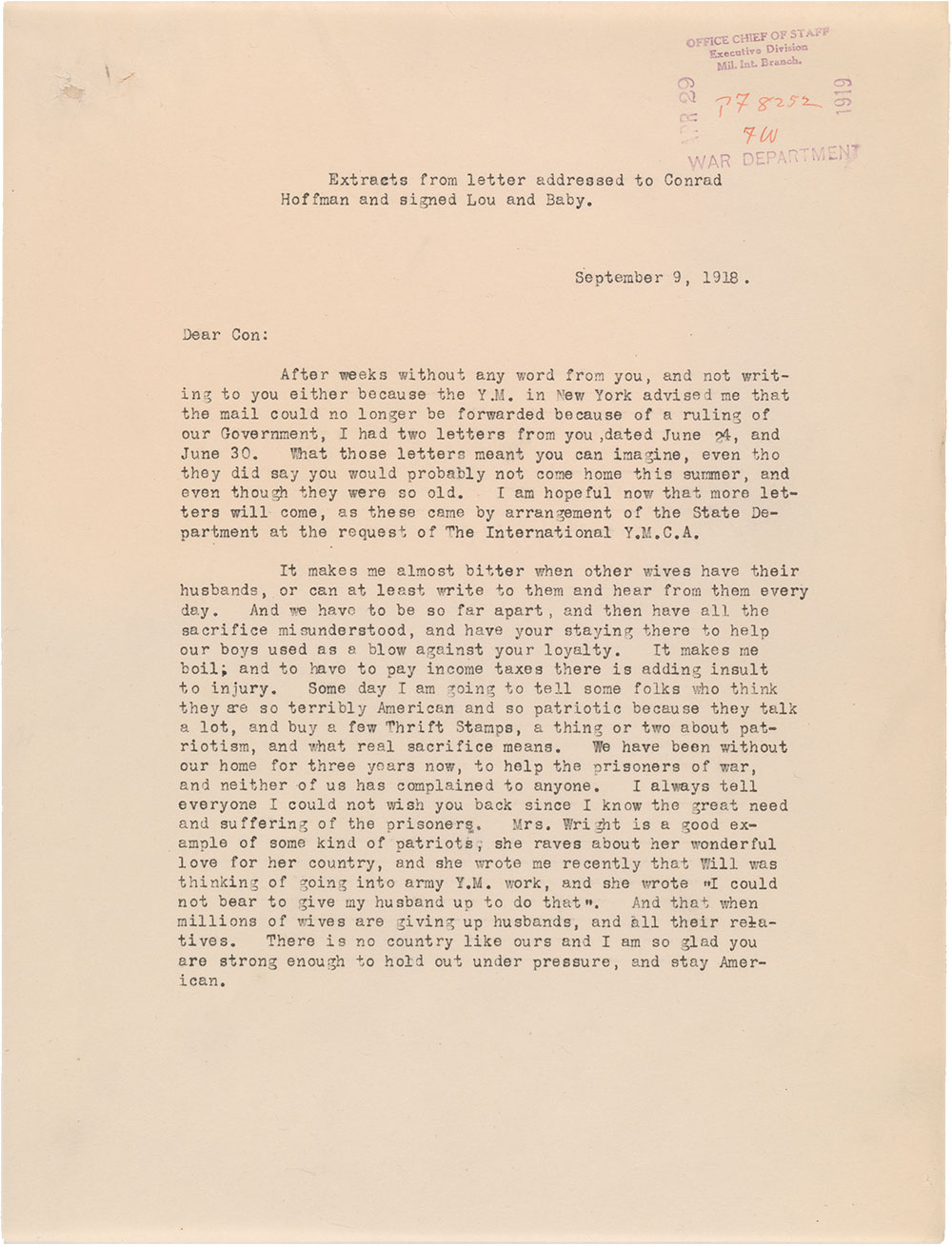 Extracts from letter addressed to Conrad Hoffman and signed Lou and Baby.

After weeks without any word from you, and not writing to you either because the Y.M. in New York advised me that the mail could no longer be forwarded because of a ruling of our Government, I had two letters from you dated June 24, and June 30. What those letters meant you can imagine, even tho they did say you would probably not come home this summer, and even though they were so old. I am hopeful now that more letters will come, as they came by arrangement of the State Department at the request of The International Y.M.C.A.

It makes me almost bitter when other wives have their husbands, or can at least write to them and hear from them every day. And we have to be so far apart, and then have all the sacrifice misunderstood, and have your staying there to help our boys used as a blow against your loyalty. It makes me boil; and to have to pay income taxes there is adding insult to injury. Some day I am going to tell some folks who think they are so terribly American and so patriotic because they talk a lot, and buy a few Thrift Stamps, a thing or two about patriotism, and what real sacrifice means. We have been without our home for three years now, to help the prisoners of war, and neither of us has complained to anyone. I always tell everyone I could not wish you back since I know the great need and suffering of the prisoners. Mrs. Wright is a good example of some kind of patriots, she raves about her wonderful love for her country, and she wrote me recently that Will was thinking of going into army Y.M. work, and she wrote “I could not bear to give my husband up to do that”. And that when millions of wives are giving up husbands, and all their relatives. There is no country like ours and I am so glad you are strong enough to hold out under pressure, and stay American.

‹ Conrad Hoffmann Jr. to his wife Louise up Ship's Cook Third Class Hugh Alexander Leslie to his parents ›
Back to Top