Maurice Hess to his father

The US Army recognized that members of certain religious groups would not fight, but maintained that these conscientious objectors ought to serve in other ways. Maurice Hess, a member of the Old German Baptist Brethren, refused to do any work that would support the war effort. As a result, the army court-martialed him. Despite the signing of the Armistice two days before his sentencing, Hess received a prison term of 25 years. He was released in late January 1919. 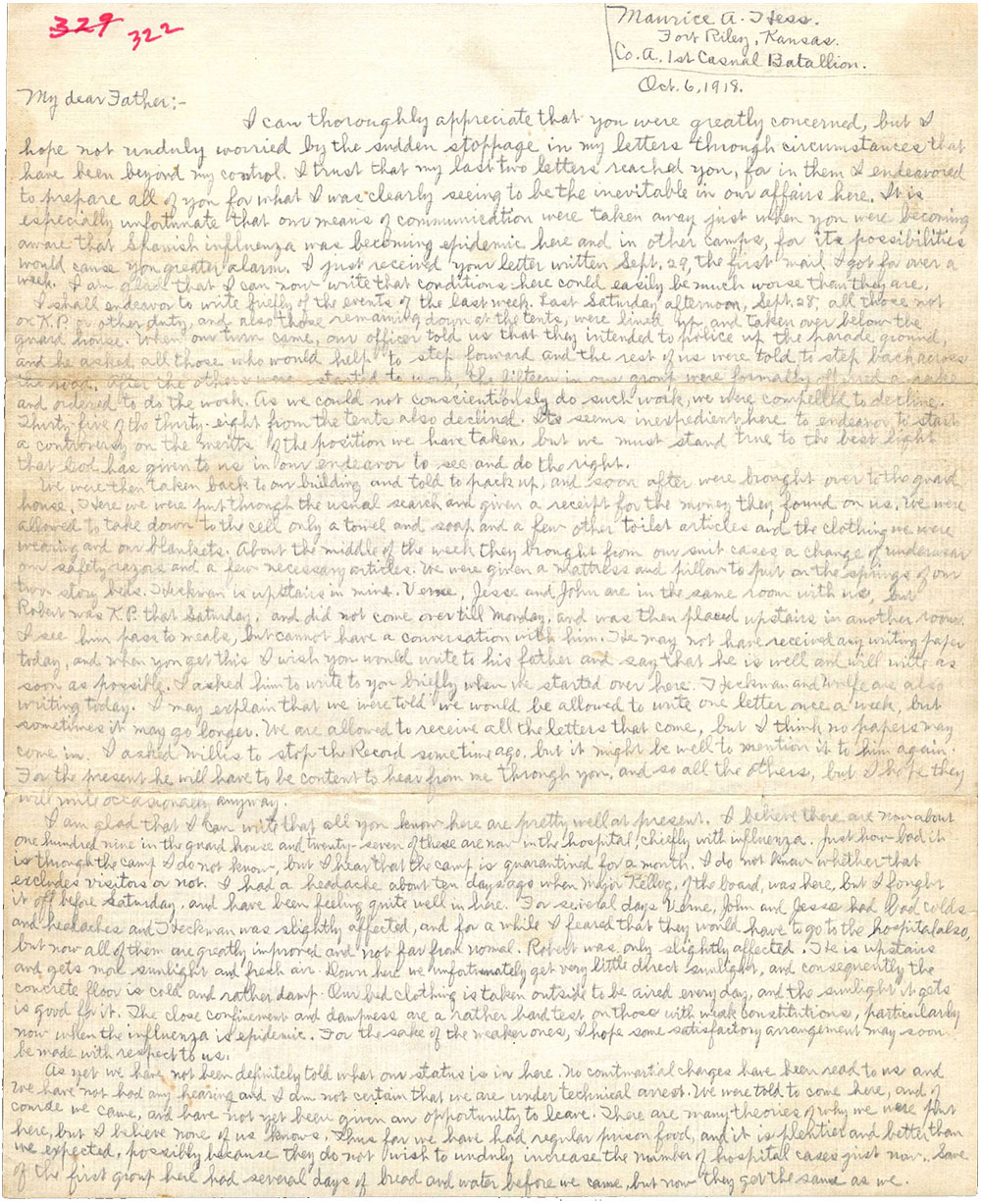 I can thoroughly appreciate that you were greatly concerned, but I hope not unduly worried by the sudden stoppage in my letters through circumstances that have been beyond my control. I trust that my last two letters reached you, for in them I endeavored to prepare all of you for what I was clearly seeing to be the inevitable in our affairs here. It is especially unfortunate that our means of communication were taken away just when you were becoming aware that Spanish influenza was becoming epidemic here and in other camps, for its possibilities would cause you greater alarm. I just received your letter written Sept. 29, the first mail I got for over a week. I am afraid that I can now write that conditions here could easily be much worse than they are.

I shall endeavor to write briefly of the events of the last week. Last Saturday afternoon, Sept. 28, all those not on K.P. or other duty, and also those remaining down at the tents, were lined up and taken over below the guard house. When our turn came, our officer told us that they intended to police up the parade ground, and he asked all those who would help to step forward and the rest of us were told to step back across the road. After the others were started to work, the fifteen in our group were formally offered a rake and ordered to do the work. As we could not conscientiously do such work, we were compelled to decline. Thirty-five of the thirty-eight from the tents also declined. It seems inexpedient here to endeavor to start a controversy on the merits of a position we have taken, but we must stand true to the best light that God has given to us in our endeavor to see and do the right.

We were then taken back to our building and told to pack up, and soon after were brought over to the guard house. Here we were put through the usual search and given a receipt for the money they found on us. We were allowed to take down to the cell only a towel and soap and a few other toilet articles and the clothing we were wearing and our blankets. About the middle of the week they brought from our suit cases a change of underwear our safety razors and a few necessary articles. We were given a mattress and pillow to put on the springs of our two story beds. Heckman is upstairs in mine. Verne, Jesse and John are in the same room with us, but Robert was K.P. that Saturday, and did not come over till Monday, and was then placed upstairs in another room. I see him pass to meals, but cannot have a conversation with him. He may not have received any writing paper today, and when you get this I wish you would write to his father and say that he is well and will write as soon as possible. I asked him to write to you briefly when we started over here. Heckman and Wolfe are also writing today. I may explain that we were told we would be allowed to write one letter once a week, but sometimes it may go longer. We are allowed to receive all the letters that come, but I think no papers may come in. I asked Willis to stop the Record some time ago, but it might be well to mention it to him again. For the present he will have to be content to hear from me through you, and so all the others, but I hope they will write occasionally anyway.

I am glad that I can write that all you know here are pretty well at present. I believe there are now about one hundred nine in the guard house and twenty-seven of these are now in the hospital, chiefly with influenza. Just how bad it is through the camp I do not know, but I hear that the camp is quarantined for a month. I do not know whether that excludes visitors or not. I had a headache about ten days ago when Major Kellog, of the board, was here, but I fought it off before Saturday, and have been feeling quite well in here. For several days Verne, John and Jesse had bad colds and headaches and Heckman was slightly affected, and for a while I feared that they would have to go to the hospital also, but now all of them are greatly improved, and not far from normal. Robert was only slightly affected. He is upstairs and gets more sunlight and fresh air. Down here we unfortunately get very little direct sunlight, and consequently the concrete floor is cold and rather damp. Our bed clothing is taken outside to be aired every day, and the sunlight it gets is good for it. The close confinements and dampness are a rather hard test on those with weak constitutions, particularly now when the influenza is epidemic. For the sake of the weaker ones, I hope some satisfactory arrangement may soon be made with respect to us.

As yet we have not been definitely told what our status is in here. No courtmartial charges have been read to us and we have not had any hearing and I am not certain that we are under technical arrest. We were told to come here, and of course we came, and have not yet been given an opportunity to leave. There are many theories of why we were put here, but I believe none of us knows. Thus far we have had regular prison food, and it is plentier and better than we expected, possibly because they do not wish to unduly increase the number of hospital cases just now. Some of the first group here had several days of bread and water before we came, but now they get the same as we. [page break]

On Monday morning, Sept. 30, Verne’s father stopped for about an hour on his way home from the Quinter love feast, but I did not get to see him, for I believe visitors can ask to see one only. Thursday morning, Oct. 3, Bro. C. R. Boone came through on his way from Quinter to Anderson Co, and I spoke with him for about half an hour up in the office, of course in the presence of one of the guards. He promised to let you know that he had spoken to me, and I hope that you received that assurance from him that I was well. We greatly appreciated his visits.

I was glad to hear the good news concerning Edgar and trust that it may prove to be true. Other good news may come just as suddenly. Verne’s brother Jay, and sixty others were recently furloughed from Dodge even before they were before the board, and were placed on a very large corn farm of a millionaire. I believe I did write of the three furloughed from Sherman. Flory and Ozler have been segregated.

I noticed the new arrangement concerning trains to Waynesboro in the paper some time ago. The logical effect will be to increase the use of automobiles. Do not send my clothing until I ask. Things may settle one way or other before long. We may be here a week, a month or a year if we live that long, we do not know, and must simply wait patiently. A little suffering will make us stronger in faith. We are thankful that we have been allowed the use of our Bibles. We will not be deprived of the privilege of prayer.

The weather about the middle of last week was rather cloudy, and that increased the dampness down here, and that was partly responsible for the large number that were sent to the hospital but yesterday and today seem to be quite sunny, and the air is dryer and warmer. That will probably aid in checking the epidemic. I think the danger point is largely passed for us as a group.

As I write it is almost exactly eleven calendar months since we reached the detention camp at Meade. We did not then realize that we might travel as far as Kansas. We have had some trials in the West as well as in the East, and have endeavored to learn and profit by them. If we were to go over the same road again, there is little that we could do differently. Conditions for study have not always been the best, but we have endeavored to prevent all the time from being a complete waste. Possibly we have been able to acquire a basis and framework for further study later under more favorable circumstances, and where reference to the efforts of others will be more available. It is remarkable to see the eagerness with which even the rabid Socialists turn to the Bible for comfort in a place like this. Many of them read a great deal in spite of the insufficient light.

A few days ago, Jesse got a small box of Jonathan apples and they had a real flavor. Our officer asked us to tell our friends not to send fruit to this place in the future. While the fruit would be very desirable, the rule seems almost necessary under the circumstances.

If you can find time, write a short letter to one of my college classmates, Prof. Charles A. Fisher, Norwood, Pa., and ask him not to send our class letter to me if it comes around again before he hears from me. Explain the circumstances briefly and tell him that I am allowed to write only one letter a week for the present, and do not wish to delay the letter when it comes by the next time. Make it clear that I can receive letters from him if he wishes to write.

‹ Lucille Fee to her husband Private Dwight Fee up Conrad Hoffmann Jr. to his wife Louise ›
Back to Top