Private Dwight Fee to his parents

When Private Dwight Fee’s father received this letter, he set about typing a copy for Dwight’s wife. He sent it special delivery so she would receive it the following day. Then he worked on publishing his son’s account from the front. Many hometown papers printed letters from service members. It was no surprise Private Fee’s father wished to publish his son’s letter. Both he and his brother were editors of the Canonsburg Daily Notes newspaper in western Pennsylvania. 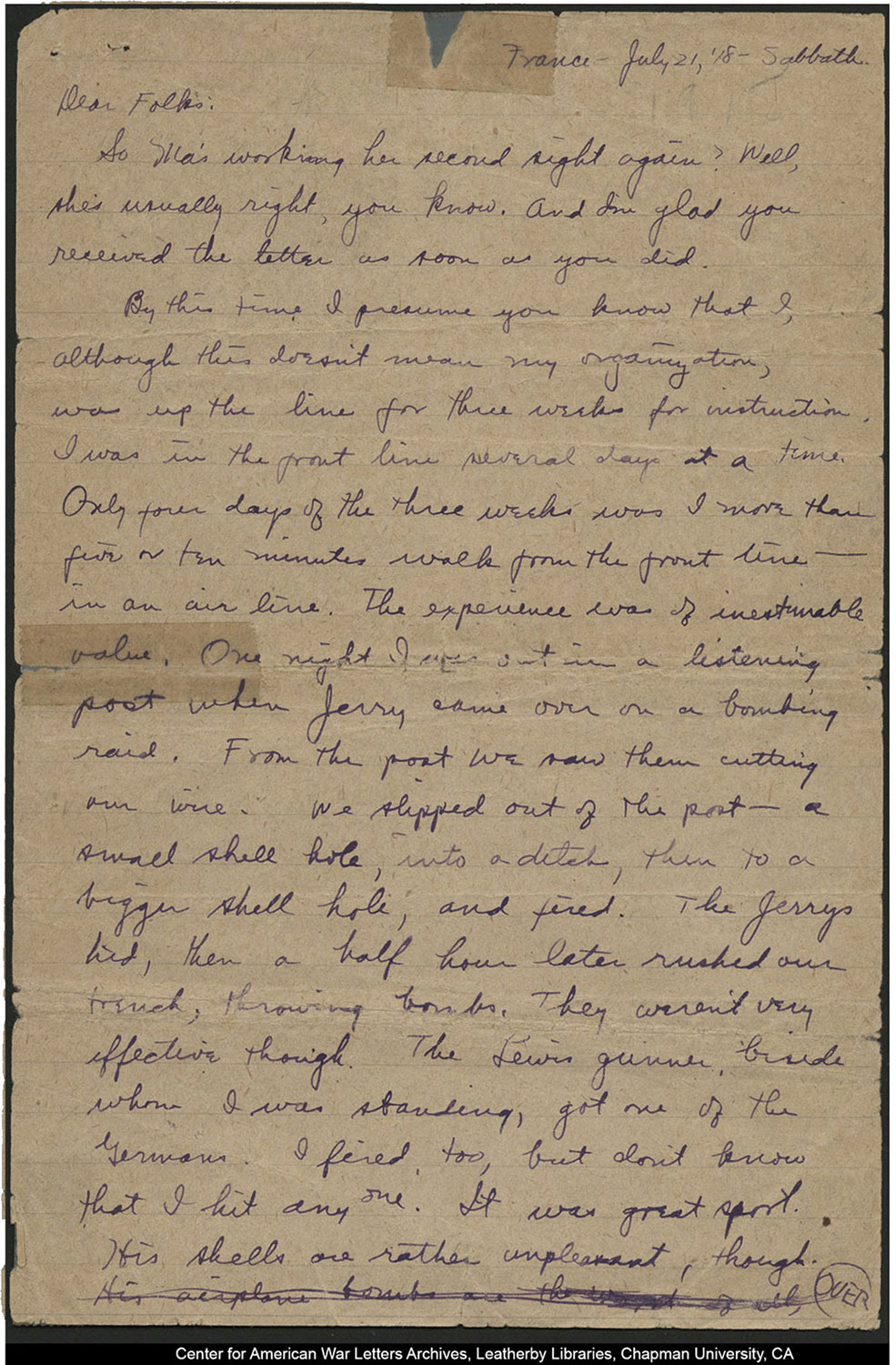 Dear Folks: So Ma's working her second sight again? Well, she's usually right, you know. And I'm glad you received the letter as soon as you did.

By this time I presume you know that I, although this doesn't mean my organization, was up the line for three weeks for instruction. I was in the front line several days at a time. Only four days of the three weeks was I more than five or ten minutes walk from the front line - in an air line. The experience was of inestimable value. One night I was out in a listening post when Jerry came over on a bombing raid. From the post we saw them cutting our wire. We slipped out of the post- a small shell hole, into a ditch, then to a bigger shell hole, and fired. The Jerrys hid, then a half hour later rushed our trench, throwing bombs. They weren't very effective though. The Lewis gunner, beside whom, I was standing, got one of the Germans. I fired too, but don't know that I hit any one. It was great sport. His shells are rather unpleasant, though. His airplane bombs are the worst of all. [crossed-out in original]

[p. 2] Three times he's come near us with his airplane bombs.

The Regimental Intelligence section, to which I'm attached now, is out everyday now, though we're 20 miles or so from the line. It looks like interesting work. It isn't likely to carry me into the front line often, though. And the front line, unless offensives are on, isn't such a terrible place to be, although it is strong medicine at times.

How about the bungalow? I'm glad you favor a new house instead of one that's been built several years, although circumstances must determine it. Remember I want to know all [underlined 3 times in original] the details.

I'm quite comfortable these days, living in a pup tent. I always did like [carat inserted: ‘like’] camping, you know. We don't cook our own meals here, as we do up the line. At the front each man or two or three men are given cans of solidified alcohol, like Lucille and I used, and each man makes his own tea, and cooks his own rations. It's great sport. I think the front line is much superior to base or training camp, save that a few days at a time is enough.

You speak of the weather being unusually cool. It's been the same way over here. Where we just were, the climate was much like a Virginia September but where we were up the line it was like a Pennsylvania May- the first part of May.

By the way, coming back from the line we had a 50 mile ride on top a London bus. It was great.

Yes, = I got 14 letters and a postcard when I got back from the line, the first mail I had received. Your last letter was dated June 23.

I haven't seen any of the lads from Canonsburg- probably won't. And I haven't seen a copy of The Notes. Much as I'd like to have it, you'd better not send it. Instead, send clippings when you write.

I believe there's a scant possibility that the war may end this year but I want it to go on until everything is settled right.- and I think it will. America surely is rushing troops.

We get a Paris edition of the London Daily Mail- 4 pages.

[p. 4] I'm glad you got the Lauder Record. Please get "Roamin in the Gloamin" and, a little later, "The Waggle o' the Kilt". By the way, please buy any books announced from the pen of Ian Hay. You must read "The First Hundred Thousand" and "All in it, or K1 Carries on". I was with a detachment from his regiment and they might have stepped out of the pages of his books. A droller lot one never met.

I've received a letter from Bob. Thanks for giving him my address so promptly. He said you wrote a fine letter.

Your letters are surely appreciated. You know they deliver mail right up in the front line, so keep 'em coming.

Remember above all that you and Ma mustn't work too hard- not even for a bungalow. I want you both to be in good shape when I get home.

[This is a British canteen - Y.M.C.A.- they are sweeping out so I must move.

‹ Sergeant Clyde Eoff, to his sister Josephine Eoff, October 26, 1918 up Lucille Fee to her husband Private Dwight Fee ›
Back to Top