After arriving safely in the United States, Hugh Alexander Leslie wrote frankly about the sinking of the USS President Lincoln. The troop transport had left France with a fraction of its typical passengers. Only 715 people, including the crew and about 30 army officers, were homeward bound on May 31, 1918 when a German submarine attacked. Leslie and his fellow navy cooks had set the morning meal and felt the torpedoes strike. Alarms sounded and the captain ordered the ship abandoned. One officer was taken prisoner and 26 died. 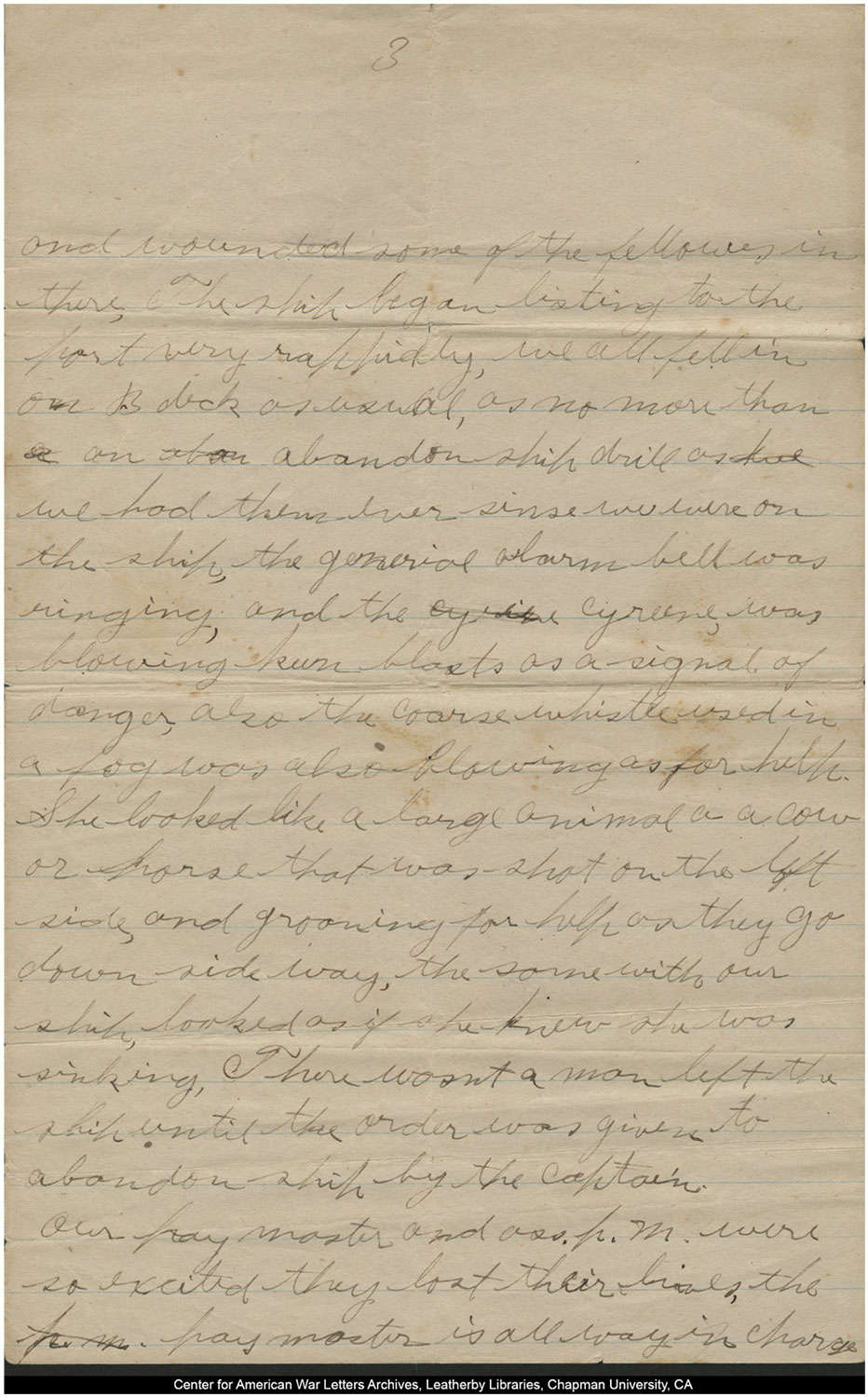 June 16, 1918 My Dearest and beloved parents and brothers & sisters: I received your most kind and appreciated letters sinse I hit the old U. S. A. Again, I suppose you read about us losing our good ship Lincoln by two torpedos from an enemy sub. Also the lives of 24 of our shipmates and 3 of our officers, our pay masters/Dr and a Lieutenant taken prisoner by the Germans.

I sent you a telegram as soon as I arrove in New York. I suppose you recived it in a fiew hours after it was sent. I just written old N. S. a 26 page letter when I got in for he wanted to know all about the sinking of our home the Pres. Lincoln.

There is no need of me writting you all about the details of the brave crew of the Lincoln. Captain Foote complemented us again and again on our coolness, bravery and obedience to orders, officers and men of the crew.

We was 480 miles off the coast of Brest France at 9 o'clock a: m: while we were stirring the bryan to the tune of about 12 knots an hour. She sank in 37 minutes after the two torpedos hit forward and aft parts of the ship. The explosions of the gun cotton was so violent, it stuned a number of the crew and tore enormous large holes in her hull on the port side. I and the other ships cooks were on watch in the galley when the first one hit forward and just as I stept out the galley the second one hit, right under the aft galley where we had just had dinner all set. it knocked me flat on the deck and a shower of salt water & wreckage of hatch covers came falling all round me. it tore the galley upside down and wounded some of the fellows in there.

The ship began listing to the port very rappidly. we all fell in our B deck as usual, as no more than an abandoned ship drill, as we had them ever sinse we were on the ship. the general alarm bell was ringing, and the cyreene was blowing keen blasts as a signal of danger. also the coarse whistle used in a fog was also blowing as for help. She looked like a large animal or a cow or a horse that was shot on the left side, and groaning for help as they go down side way, the same with our ship, looked as if she knew she was sinking. There wasnt a man left the ship until the order was given to abandon ship by the captain. Our pay master and asso. p. m. were so excited they lost their heads. the pay master is all ways in charge of the comesary branch, the chief comesary stewards, cooks & bakers, me. The cooks & bakers of the 9th division were busy throwing off life rafts until the waves were almost washing over the deck. all the pay master would do was to run up and down the deck rubbing his hands. I told him to jump off and grab a line to a life boat or raft, if he couldn't swim. I told him she was sinking rappidly. He said, "No Leslie, jump and save yourself." He took off his gun and dropped it on deck, and a Negro grabbed it and blew his own head off with it as the ship was sinking. The last I saw, him and others was going as high as he could on the ship.

I jumped and swam to a raft. it taken some good swimming to swim to one of those rafts in a choppy sea as that. some of the rafts were lashed to the ship and with the ship, some of our best friends lost their lives, when she went down. I was within 15 foot of it when she disappeared. We were in the water 15 hours before the destroyer picked us up that night. We went back to Brest and come abord the Great Northern, to steam back to the states. she is a fast ship, a 23 knotter an hour. we made this trip in seven days. you can take it for me I was glad to be back here.

The government gave us a full bag of clothes, as we lost everything we had. I hit the water with a pair of white pants, an undershirt, an apron & white hat. We are a crew with out a ship, or a dog with a home. We are on the Antigne, one of the ships that was with us when we got hit. We are just staying here waiting for orders to go to the Navy yard or barracks.

I will knock off at present as ever H. A.

‹ Louise Hoffmann to her husband Conrad up Miss Anna V.S. Mitchell (Red Cross), to her sister Caroline Phelps Stokes, April 1, 1918 ›
Back to Top