Yeoman First Class Charles Edmund Worth to his mother

Charles Worth handled cable communications while stationed with the US Navy in Brazil, an American ally from late October 1917. Worth had grown tired of his mother’s comments on the horrors of war and her worries about the morality of his behavior away from home. He told his mother that letters like hers about the “terrible” war undermined morale. Like many others, he considered the war an opportunity for the United States to fight for peace, demonstrate its courage, and save civilization. 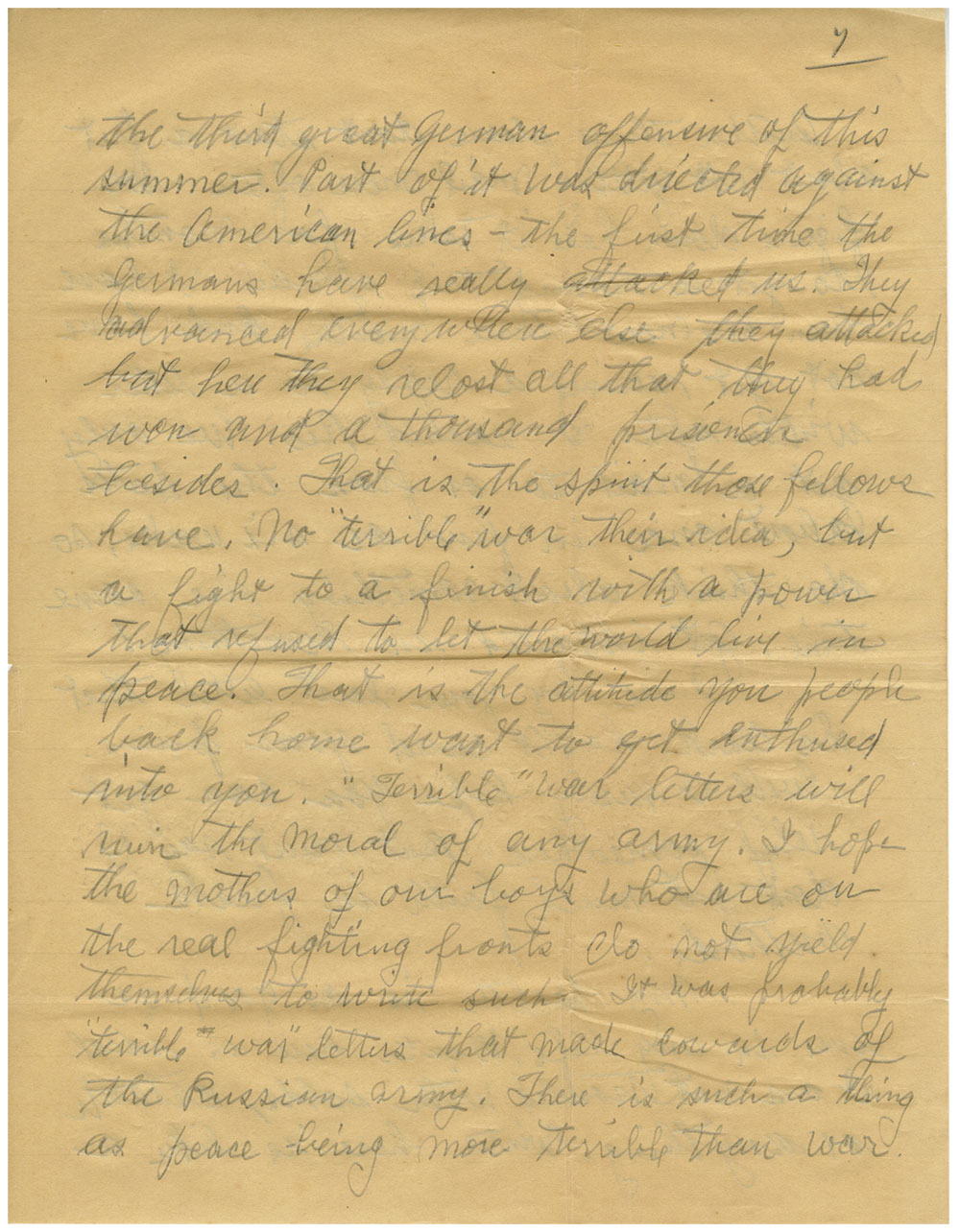 Having written enough in my last letter to cost me forty cents postage, I mailed it about a week ago and will now start on another. Since then I have gotten another mail from the state bringing two letters from you and the check for the liberty bond. They were the letters of May 20 and May 27. I enjoyed one of them very much as I do almost all of your letters in fact. The clippings proved very interesting also. I only hope the Supreme Court does not reverse Judge Robles in his commendable work of cleaning up the Tampa bar. I see he ousted Sheffield and I hope you will keep me informed on the progress of the other case.

[p. 2] that goes against my grain, it is a lecture. You know as well as I that it does more harm than good. You know as well as I that it only angers one to have valuable space in letters used for sermonettes, when letter are the only connection I have left with home and are therefore so precious. You know all these things so why will you? Can’t you see that it kills all chance for a freedom of confidence in my letters and talk with you if I know that everything I say is read with the primary idea, not of intent in what I am doing but in seeking some hidden admission of guilt? I thought you had learned this from an unpleasant incident once before when I found you had been reading my personal mail to try to find some evidence of guilt; but it seems not. I hope someday you will become interested in me solely for what I am and not solely for what you would like for me to be. I can lead only one

[p. 3] life – my own – and will have hard enough time making that satisfy one person – myself; to make it be all that another could wish would be impossible. Everyone has one existence to live, one life only for which he is responsible. You directed yours, let me plan mine. I don’t think this is a selfish view do you? In my opinion there is one thing about which every man had a right to be selfish – his own life. I hope you understand my attitude, it is the same one I have held and I think you will admit always displayed but never before put in black and white.

No, mother, I do not drink – am as much a “t-totaler” as ever. I don’t think I ever shall but I make no promises. I reserve to myself the sole right to judge what I think best for me. And I don’t think you need worry about my ever disgracing you.

As to the checks for the bonds – this is no use in your arguing with the banks, or carrying

[p. 4] down bonds to prove your kinship to me. The only way you could cash checks made payable to me would be by holding a power of attorney from me to do so or getting a special act of the legislature put thru to change a law which is law all over the country and in most parts of the civilized world. You had best continue to forward them to me. I would suggest however that you fold the check envelope and all within your letter. I shall endorse them “specially” and return them to you to cash for my account.

One word more before I finish my lecure for you see lecture begets lecture. If you don’t quit worrying over this “terrible” war and the hard luck of humanity in general and yourself and kindred in particular you will find yourself before long a fit subject for the insane asylum. Cheer up! Look on the bright side. Think what a wonderful opportunity America has to save the

[p.5] world from the ambitions of a most powerful organization of home-, religion- and civilization-destroyers. It is no use to sit down and wring your hands and wish the world history might have been made differently so that a nation imbued with such ambitions had never come into a position where it could hold its “shining sword and mailed fist” over the heads of the peace lovers of the earth and order them to cringe. It is no virtue to pray like a weakling that the cup might pass from us. The fact is that the Germans are a factor in this game and a big factor at that. You might expect a coward to whiningly wish that he had no enemies and weakly pray that they might be destroyed by some miraculous prowess but the only code a red-blooded man or a woman of whom that man will be proud knows is to accept the challenge of the devastater and put

[p. 6] his shining sword and mailed fist forever where it can no longer threaten himself and his posterity. So, cease to be a horrified victim and become a proud victor – proud of your nation which entered the war at a time when our allies were all but lost – proud of the sons who know how necessary is their struggle and who waste no time in theorizing about “terrible” wars, proud that it is they who will furnish the deciding kilogram that tips the scale, and proud that the world is realizing today what we have known all along that the greatest, grandest, strongest most-to-be-feared nation in the world and yet most peace-loving – when peace is possible – nation in the world is the grand old U.S.A.

[p. 7] the third great German offensive of this summer. Part of it was directed against the American lines – the first time the Germans have really attacked us. They advanced everywhere else they attacked, but here they relost all that they had won and a thousand prisoners besides. That is the spirit those fellows have. No “terrible” war their idea, but a fight to a finish with a power that refused to let the world live in peace. That is the attitude you people back home want to get enthused into you. “Terrible” war letters will ruin the moral of any army. I hope the mothers of our boys who are on the real fighting fronts do not yield themselves to write such. It was probably “terrible war” letters that made cowards of the Russian army. There is such a thing as peace being more terrible than war.

[p. 8] Another thing please don’t start a fret about not getting mail more often. We figure down here it takes four months to get a round trip of mail. I have been here now three months and have not yet received a reply to a letter written after I reached Rio. We only get a mail to or from the Sates about once in five or six weeks, so do think about something else some time. Get interested in something!

I see by your last letter that Dr. Clark hasn’t cured your pains. Well I surely hope you can get relief somewhere. But must say I don’t put much faith in freak methods. My health is as good as ever in my life. Winter here is ideal. I am not troubled with colds, catarrh or anything. Winter here is like a

[p. 9] late fall season in Tampa. I think I shall move out into the suburbs to a high-class boarding house on the first of the month. It will cost a little more than the hotel where I am stopping now but will be much more homelike and pleasant and the food is European in style and not latin. I cannot get acclimated to this food.

There is no particular news except that I expect to have this mail leave about a week from today.

P.S. Continue to address my mail to Rio.

I see a ship lying out this morning which they say is for the states. All well. So long till later

‹ Private Raeburn Van Buren, to his grandparents, October 8, 1918 up Establishing Peace ›
Back to Top