Marion Doane, RN to her mother and sister

Marion Doane was working as an operating room supervisor outside Paris, France, when the war began. The staff at her American-run hospital treated wounded troops and created an ambulance service. She had been treating soldiers for over two years when she heard a Frenchman give an account of being a prisoner of war and of the abuse Germans inflicted upon French, English, and Russian prisoners. Stories like this helped cast Germany as an enemy in the eyes of the Americans. 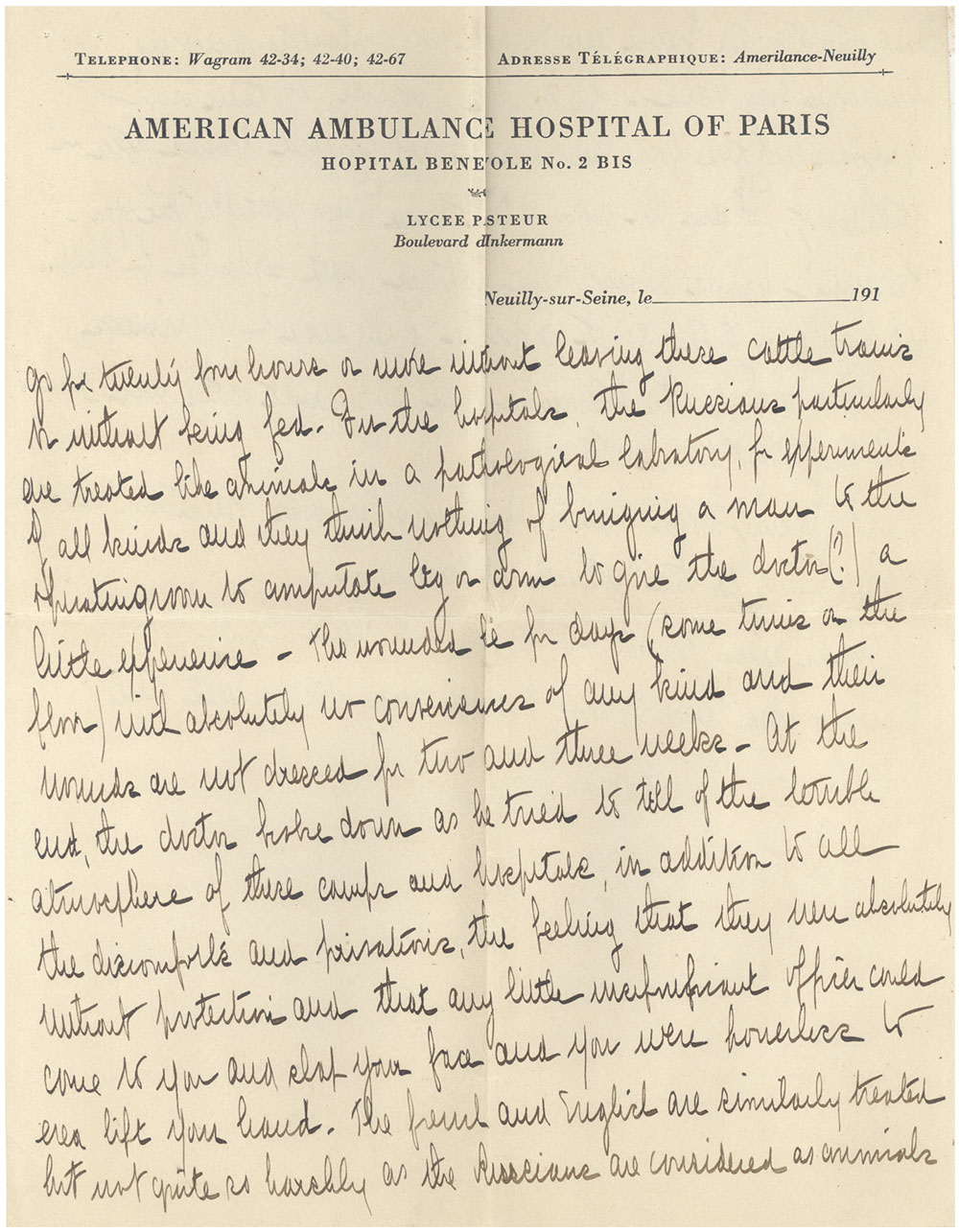 Such a treat of home mail I had in one week, two nice letters from each of you, a sixteen “pager” from Mary, a long one from Bert (always sending love to “your mother and Lilla”) and three or four others – One mailed Jan. 31 arrived five days after the one mailed Feb. 6 – I enjoyed the clippings, particularly the one about Flora – and about the enclosed letter. Mrs. James’ letter was very loving, I think – Will be glad to have the comfort bags – of course she couldn’t send enough for all so maybe I will take them out to one of our small convalescent hospitals. Wednesday chief took Madame Gertwig and me out to Ponterre, beyond St. Germain in an open car while he made rounds at one of those

[p. 2] hospitals. They are well cared for but haven’t as much comfort as our men have so I would like to take them some things sometime.

Saturday a good many of us from here went to the Hotel Crillon to a very interesting conference by a French doctor who has been twenty one months a prisoner in Germany – This was given, not in aid of any charity, but simply to comply with the request made by the Russian prisoner, to tell of the conditions existing there – I have seen suffering enough since the war began but never have I had such a heart ache as I had after listening to this man’s tale – Long marches forced on men with wounds in their abdomen, clothed only in a chemise and sabots in December and January, and if they dropped they were either whipped or stuck with a bayonet. They are not half fed so that they often eat potato peelings and even dig up dead horses or dogs. When they are transported they are packed in so closely they cannot lie down and they

[p. 3] go for twenty four hours or more without leaving these cattle trains or without being fed. In the hospitals the Russians particularly are treated like animals in a pathological laboratory for experiments of all kinds and they think nothing of bringing a man to the operating room to amputate leg or arm to give the doctor (?) a little experience – The wounded lie for days (sometimes on the floor) with absolutely no conveniences of any kind and their wounds are not dressed for two and three weeks. At the end, the doctor broke down as he tried to tell of the terrible atmosphere of these camps and hospitals, in addition to all the discomforts and privations, the feeling that they were absolutely without protection and that any little insignificant officer could come to you and slap your face and you were powerless to even lift your hand. The French and English are similarly treated but not quite so harshly as the Russians are considered as animals.

[p. 4] And then too the French and English are constantly receiving packages from home – the English provide for their own prisoners but the poor Russians are not so well looked after in that way – It was all more pitiful than I can possibly tell you – the French papers do not have pictures with appeals for help but I am going to try to get a poster of the unit for prisoners, and also ones for the tubercular ward, as a result of the war, and will try to get them to you.

‹ A. Piatt Andrew to his parents August 18, 1916 up Belgian student Joseph Gregoire to President Woodrow Wilson ›
Back to Top