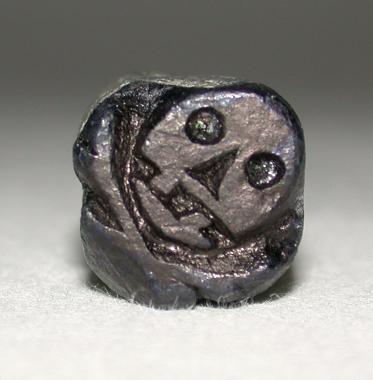 Image courtesy of Smithsonian's National Postal Museum
While small post offices were issued circular date stamps postmasters usually also needed separate stamp canceling devices. Canceling handstamps were used in order to ensure stamps were used only once. Such canceling devices were sometimes made by hand. One example of the creativity of postal employees of the time is this hand-made skull and cross-bones handstamp.

This handstamp, known as a “fancy cancel,” was shaped from lead. As such imprints wore down with use; postmasters and clerks drew out their knives and created new designs. Fancy cancels began disappearing from use after 1904. That was the year the Post Office Department ordered postmasters to stop using “unauthorized postmarking stamps” as part of a standardization and modernization program.