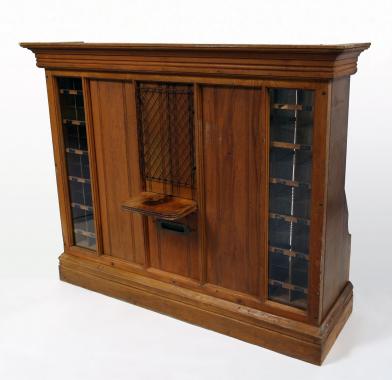 Image courtesy of Smithsonian's National Postal Museum
This counter-top, screen-line post office cabinet belonged to John T. Jackson, an African American postmaster in Alanthus, Virginia. The front side of the cabinet has a central window that is covered with metal mesh as well as an opening at the bottom with a small shelf. Flanking the central window are vertical glass panels that reveal the sorting shelves, which were accessed from the back of the unit. Postal clerks worked from the back of the cabinet, where there are thirty slots for sorting.

The Post Office Department had appointed few other African Americans as postmasters at the time the twenty-nine-year old Jackson assumed the duties at a fourth-class post office in 1891. Jackson earned a commission determined by the amount of postage sold at his station. Along with this postal career, Jackson worked as a merchant, farmer, and sharecropper. Having served as postmaster for over forty-eight years, Jackson retired on January 31, 1940. His wife Lille held the position until the post office closed seven months later.

The cabinet is generally worn from use, although the wood framework appears in good structural condition. The area to the right of the screened window is abraded. The numbers 29, 23, 24, and 26 can be seen by looking through the glass on the right side.