On June 8, 1959, the U.S. Post Office Department went way beyond their standard mail transportation systems. They did not use horses or dogs, trains, trucks, planes or trucks. They used a Regulus I nuclear missile.

For the sake of the trial, the nuclear warhead was filled not with bombs, but with two red and blue metal containers holding 1,500 envelopes each. In the midst of the Cold War, Postmaster General Arthur E. Summerfield approached the Secretaries of Defense and the Navy with the idea of test firing a mail-carrying missile. The Department of Defense agreed to work with the Post Office on what today we can only term a wacky idea for carrying mail. At the time, the idea of shooting off a mail-carrying missile made sense to the parties involved. For the Post Office, it was a chance for Postmaster General Summerfield to try one more method of moving mail in his drive to modernize the postal system. For the military, it was a subtle signal to the Russians that the U.S. military was capable of such accuracy in missile flight that one could used by the post office.

Summerfield was excited about the missile mail trial, but nervous enough about a successful outcome that he had press releases created for the event, but not released until he knew it had succeeded. Summerfield along with several postal officials and military officers gathered where the USS Barbero (SSG-317) was docked at Norfolk, VA, turning 3,000 envelopes over to the ship’s crew. The envelopes were split into two piles and placed into the two metal containers. Sailors then placed the containers into the Regulus I missile’s nuclear warhead hold.

The Barbero sailed about 100 miles out to sea and, just before noon on June 8, 1959, successfully fired off the mail-carrying missile. A crew manually guided the missile immediately after firing until they lost sight of it as the missile traveled over the horizon. At that point, chase planes guided the missile through the rest of the flight. It was guided to a successful landing 22 minutes later at the Mayport, FL, Naval Auxiliary Air Station near Jacksonville, FL. Summerfield and the naval officers had made their way to the station. After the missile was towed to the waiting officials, Summerfield opened the warhead hatch and removed some of the letters for show. 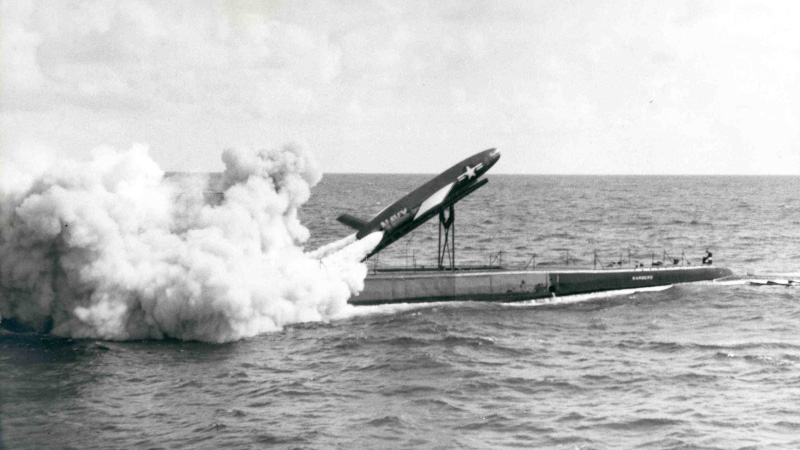 Regulus I blasting off from the USS Barbero.

The Regulus being towed to meet awaiting navy and postal officials (left). Summerfield opening the hatch of the warhead to examine the letters (right).

The letters were all identical. They were from Summerfield to President Eisenhower, Vice President Nixon, cabinet members and top federal officials, all members of congress, Supreme Court justices, the Secretary of the Smithsonian Institution, U.S. governors, postmasters generals from around the world and the officers and crew of the Barbero. 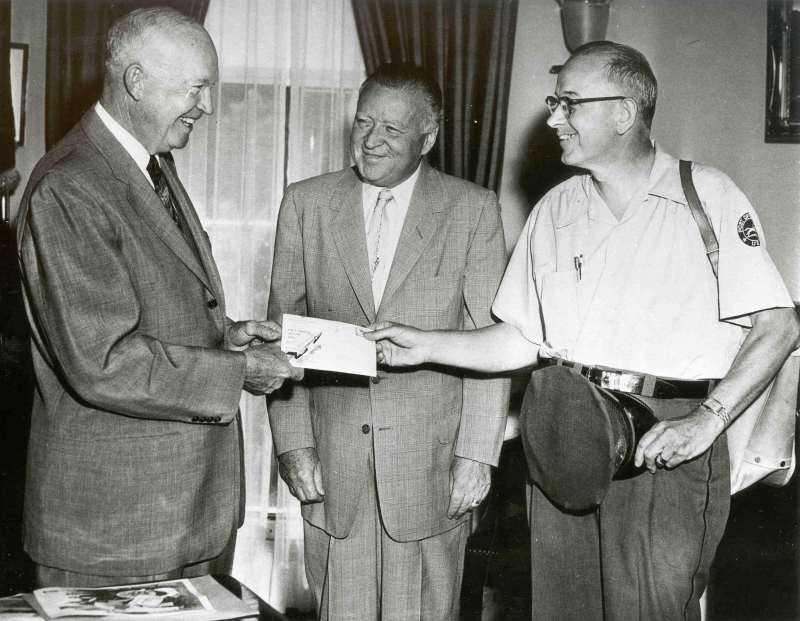 Summerfield made sure to be on hand when the missile mail letter was delivered to President Eisenhower. Letter carrier Nobel Upperman is on the right. 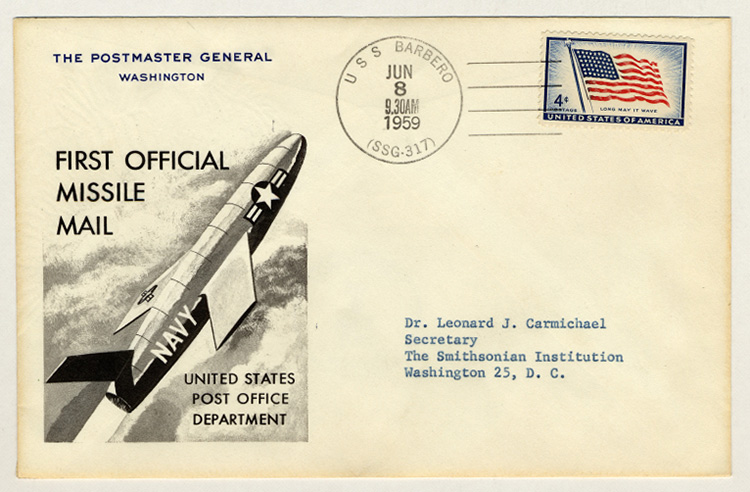 The envelope for the missile mail letter sent to the Smithsonian.

Summerfield’s letter was an enthusiastic announcement of the experiment. The Postmaster General was ecstatic over the possibilities of technology for postal use, claiming that, “This peacetime employment of a guided missile for the important and practical purpose of carrying mail is the first known official use of missiles by any Post Office Department of any nation. Before man reaches the moon, mail will be delivered within hours from New York to California, to Britain, to India or Australia by guided missiles.”

Because the missile flight had not been announced beforehand, Summerfield’s office received several letters from stamp collectors who complained that they had not been given the opportunity to place items aboard the flight. Other letters complained that the envelopes had regular stamps, when obviously they should have used airmail stamps. Many writers asked when the next flight would take place and asked that they be allowed to place a letter on board. Summerfield’s enthusiasm for the flight notwithstanding, there were no more missile mail flights.