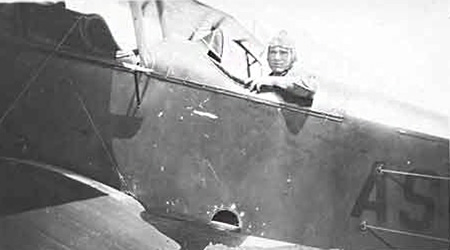 Clarence A. Gilbert in the cockpit of his mail airplane.
- Courtesy of Anita Wilson

Clarence O. Gilbert was killed on December 21, 1924, only a few months after he joined the Air Mail Service. Gilbert began flying as a U.S. Army flying cadet during the first World War. He resigned from the army as a 2nd lieutenant. Gilbert's first assignments in the Air Mail Service were as a mechanic and relief pilot, working out of Iowa City, Iowa.

The day of his death, Gilbert was west-bound, having taken off from Chicago at 7 p.m. He found himself in a blinding snow storm. His airplane in trouble, Gilbert switched off the ignition and jumped, wearing his parachute. The parachute opened while Gilbert was still too close to the airplane, and it was damaged as he jumped.

Airmail pilots' deaths were news around the country. Gilbert's death was mentioned in the Washington Times and the New York Times, shown below. Gilbert, Born in Plainville, Kansas, Gilbert was 28 years old when he died, and had seen service in World War I. Gilbert had been flying as a relief pilot between Chicago and Iowa City, Iowa.

GILBERT MADE MAIL SAFE BEFORE LEAP
Air Post Pilot, Killed When His Parachute Failed, Guarded airplane Against Fire.
Omaha, Neb., December 26.—Before Air Mail Pilot Clarence Gilbert leaped to his death from his airplane over Kaneville, Illinois, last Sunday night, he pulled the electric switches in the ship and saved his cargo of mail from destruction, Carl F. Egge, general superintendent of the air mail service, declared today after he received reports of investigations in the crash.

What happened in the mail airplane before Gilbert took his fatal plunge probably will remain a mystery, Mr. Egge said. One fact stands out, however, that one of Gilbert's last thoughts was to save the mail, Mr. Egge added. When the ship hit the ground there were ninety gallons of gasoline in the tank. Had not the electric switches been pulled, the airplane and mail would have been destroyed, the superintendent declared.

The motor in the airplane was found in perfect condition, according to Superintendent E. D. Richard, of the repair department at the Chicago field. Mr. Egge said that "there might have been some dirt in the fuel transmission which blocked the feed," causing Gilbert's engine to fail.