Little is known of Edwin C. Hubbard's career as an airmail pilot other than the dates of his month-long service and his assignment. When private contractors began taking over the mail service, Hubbard flew the international mail between Seattle, Washington and Vancouver, British Columbia. On October 27, 1926, the Washington Post reported that Gerald Smith, who was Hubbard's substitute, crashed his seaairplane into the residence of Senator R. F. Green. The article noted that part of the senator's breakfast room was demolished. Smith was injured, but not seriously. Smith was unconscious when taken to St. Joseph's hospital and the seaairplane was badly damaged. 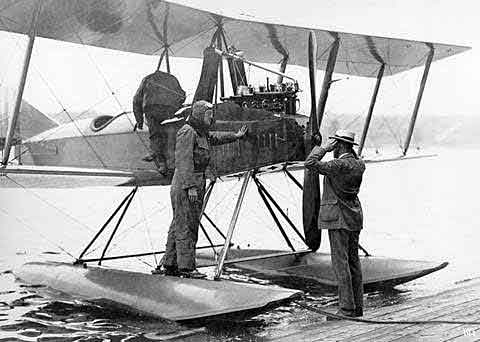 E. C. Hubbard standing with William Boeing (r). Hubbard worked as a contract for Boeing shortly after he left the airmail service in January 1919. On March 3, 1919, the pair carried the first U.S. international airmail. Their flight, in the Boeing Model C aircraft, was made between Vancouver, British Columbia, Canada, to Seattle, Washington in the United States.