Hyde-Pearson was born in 1894 in Toronto, Canada. During the first World War, Leonard B. Hyde-Pearson flew for the Royal Air Force. During that service, he received the British Meritorious Service Cross and the Royal Victorian Order. When the U.S. entered the war, Hyde-Pearson traveled to Kelly Field, Texas, where he trained army pilots. After the war, he tested airplanes for a series of companies. While a test pilot, he became the first to fly an all-metal airplane over the city of Washington, D.C., and made one of the then-recorded fastest roundtrip flights between Boston and New York City, carrying news of President Harding's funeral. In 1922, when the Mexican government purchased 26 airplanes, Hyde-Pearson was one of the pilots who traveled to Mexico to help train pilots there.

In 1923, Hyde-Pearson began work as an airmail pilot. In August of that year, he was one of the pilots who took part in the first transcontinental airmail flights. The service began on Tuesday, August 19. Hyde-Pearson carried the mail from New York City to Cleveland that Friday. Between September 3-15, 1923, Hyde-Pearson was one of the airmail pilots chosen to participate in an air carnival at Mitchel Field Air Station in Mineola, Long Island, New York. The pilots demonstrated the quick takeoff and landing skills needed to unload and load mail airplanes, transferring cargo from one airplane to the next.

Hyde-Pearson's career lasted just over a year. Early in the morning of March 8, 1924, while flying the mail from Bellefonte, Pennsylvania to Cleveland, Ohio, in de Havilland airplane #327, he encountered a bad snowstorm near Grampian, Pennsylvania. In the limited visibility, Hyde-Pearson died when his airplane crashed into a tree atop a mountain. 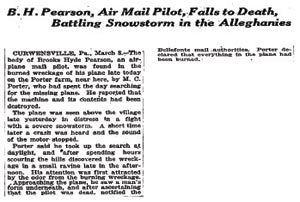 In this clipping from the New York Times, reporters note that Leonard Hyde-Pearson's body had been found following his fatal crash on March 8, 1924.

The New York Times filed this report of the crash and discovery of the pilots' airplane and body.

The body of Brooks Hyde Pearson, an airplane mail pilot was found in the burned wreckage of his airplane late today on the Porter farm, near here, by M. C. Porter, who had spent the day searching for the missing airplane. He reported that the machine and its contents had been destroyed.

The airplane was seen above the village late yesterday in distress in a fight with a severe snowstorm. A short time later a crash was heard and the sound of the motor stopped.

Porter said he took up the search at daylight, and after spending hours scouring the hills discovered the wreckage in a small ravine late in the afternoon. His attention was first attracted by the odor from the burning wreckage.

Approaching the airplane, he saw a man's form underneath, and after ascertaining that the pilot was dead, notified the Bellefonte mail authorities. Porter declared that everything in the airplane had been burned.

"I trust your eyes may never see this. But should God desire that you do at least know that He has called me, like many more who have given their lives for the future of this wonderful game."

In his letter, Hyde-Pearson had included this poem he dedicated to his fellow airmail pilots:

My Beloved Brother Pilots and Pals
I go west, but with cheerful heart.
I hope whatever small sacrifice I have made
May be of some use to the cause.

When we fly we are fools, they say.
When we are dead, weren't half-bad fellows.
But everyone in this wonderful aviation service
Is doing the world far more good than the public can appreciate.

We risk our necks; we give our lives;
We perfect a service for the benefit of the world at large.
They, mind you, are the ones who call us fools.

But stick to it, boys. I'm still very much with you all.
See you all again.