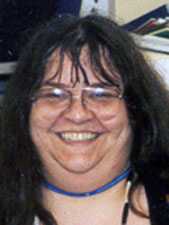 Nancy A. Pope, a Smithsonian Institution curator and founding historian of the National Postal Museum, passed away on August 30, 2019, at Oak Manor Healthcare Center in Burtonsville, Maryland. She was 62 years old. Nancy is survived by her brother Chris Pope, aunt Peggy Conn, and cousins Margaret Mason, Marcy Cohen and Rex Conn.

Nancy was born January 28, 1957, in Pendleton, Oregon to Joseph and Paula Pope. Friends and family recall her declaring at an early age her desire to work for the Smithsonian Institution, the world’s largest museum, education, and research complex. Majoring in history and French, Nancy graduated from the University of Oregon in 1979. She relocated to Washington, D.C. – the hub of the Smithsonian – and worked at the League of Women Voters, followed by the Library of Congress. In 1984, Nancy attained her childhood dream when she was hired as a museum technician at the Smithsonian’s National Museum of American History. At that time, she concurrently pursued a Master of the Arts in American Studies from the George Washington University. Nancy was instrumental in the establishment of the Smithsonian’s National Postal Museum, which opened to the public on July 30, 1993. As the museum’s historian, she was responsible for researching and writing its 21 original exhibitions, 7 films, and many digital assets.

Throughout her decades-long career as a museum professional, Nancy created and contributed to numerous permanent, temporary, and traveling exhibitions. These exhibits touched upon her primary areas of expertise—labor and technology, transportation systems, and mail processing—but also illuminated nuanced elements of history through a unique postal lens. Highlights include “As Precious as Gold,” a 1998 exhibition exploring means of communication during the Klondike Gold Rush; “The Great One,” a 2001 bilingual exhibition detailing the life and legacy of baseball legend Roberto Clemente; and “Pony Express: Romance vs. Reality,” a 2010 exhibition scrutinizing the short-lived delivery service and the fascination it continues to inspire.

Notably, Nancy collected the handcuffs used on Ted Kaczynski (the Unabomber) when he was captured near Lincoln, Montana by a law enforcement task force that included postal inspectors. After the September 11th terrorist attacks, she supervised the accession of items and recording of oral histories from employees of the Church Street Station Post Office, which processed and delivered mail to the former World Trade Center. She also obtained the Princeton, New Jersey collection box from which the 2001 Anthrax attack letters were mailed. These objects remain on permanent view at the National Postal Museum.

As an avid early adopter of electronic media, Nancy led the project team that built the National Postal Museum's first website in 2002; she remained a frequent contributor to the website throughout her tenure. She also created the museum's earliest social media presence in 2007 and moderated lively forums for the 19th century postal mascot Owney the Dog, as well as for former Railway Mail Service clerks and their families.

A noted expert on the history and workings of the United States Postal Service and its predecessor—the Post Office Department—Nancy fielded inquiries from across the world and gave interviews with media outlets including The Wall Street Journal, The Washington Post, USA Today, NPR, and SiriusXM Satellite Radio. A gifted and prolific writer, her work has appeared in publications including Smithsonian Magazine, American Philatelist, Postmasters Advocate, Civil War 150, Every Stamp Tells a Story, and many more. With great enthusiasm, Nancy guided and mentored over 75 curatorial interns, supporting their research and championing their accomplishments.

Nancy was committed to philanthropy and gave generously to local, national, and international charities. She also volunteered her time to the Whitman-Walker Clinic and Food & Friends, an organization that delivers nutritious meals to the critically ill. Nancy’s expertise, sharp wit, and boundless passion for her work will be missed by many. At her request, no service will be held. It is suggested that donations be made in Nancy Pope’s honor to the Heritage Station Museum in Pendleton, Oregon, or to the institution she helped create—the Smithsonian’s National Postal Museum in Washington, D.C.