In 1898, the cry of “Gold” rang out with the discovery of the precious metal in Alaska. Before long thousands of stampeders, mostly Americans, were making the treacherously long journey into the Klondike gold fields. Their families yearned for news of the adventurers, who also longed to keep in touch with home. But the Post Office Department had little presence in the territory at the time and so dispatched a postal inspector to create a functioning mail system.

This inspector was one of the most colorful characters in America’s postal history. His name was John Phillip Clum (1851-1932). Among his various careers were stints as an Indian Agent in San Carlos, AZ; the founding editor of the Tombstone, AZ Epitaph newspaper; as well as the town’s mayor and postmaster. He later served in a variety of areas as postal inspector and picked up the mantel of postmaster later in following trips to Alaska, first in Nome and then Fairbanks.

Clum's postal bosses knew that after having experienced the great silver rush of Tombstone, the inspector would be the right man to send up to the middle of the Klondike Gold Rush. On March 5, 1898, Clum was named post office inspector on special duty in Alaska. He sailed from Seattle, WA to Skagway, AK, arriving there on March 26, 1898. The Seattle Post-Intelligencer noted that Clum “has power in every way to meet the demands on the post-office department of the great influx of people to Alaska. His recommendations regarding mail affairs are to be accepted by the department without question.”[1] The Seattle Times took note of Clum’s personality, calling him “a quiet, unassuming gentleman of very pleasing manners; and fine conversational abilities—while back of all these there is an unostentatious force of character and a calm determination that readily demonstrates the wisdom of the government for selecting him for this very important mission."[2]

The fast-growing gateway towns to the Klondike, Skagway and nearby Dyea were where passengers began their trek into the gold fields. Both towns had operating post offices when Clum arrived, although with some problems. As the inspector noted in his diary about the trip:

Dyea and Skagway are separated by a distance of only five miles. When the post office at Skagway was first established a pouch was dispatched from Dyea to Skagway by the established route, the pouch had to go to Juneau 100 miles and then return to Skagway. After traveling the 200 miles the postmaster at Skagway brought the pouch to Dyea to have it unlocked, not having received his mail key.

Considering the trip a grand adventure, Clum brought his 20-year-old son Woodworth along for the ride. After inspecting the facilities in Dyea and Skagway, and helping to straighten out their system, Clum set out along the Chilkoot Pass trail to the Klondike. Before climbing the 1,500 steps carved out of the ice up to the Canadian border, Clum decided that the tiny temporary community of Sheep Camp needed a post office and appointed Joseph G. Brown as postmaster on April 4, 1898. On May 28, Clum revealed the excitement he felt at setting off to the Yukon River and the long ride up to Dawson. “Loaded outfit in canoe--and it was a big load too--with the stars and stripes at our stern, Woodie and I each fired two shots from our pistols as we pushed off from the shore and started on our long voyage. The morning was calm the air pleasant and the lake placid and smooth as a mirror.”[3] 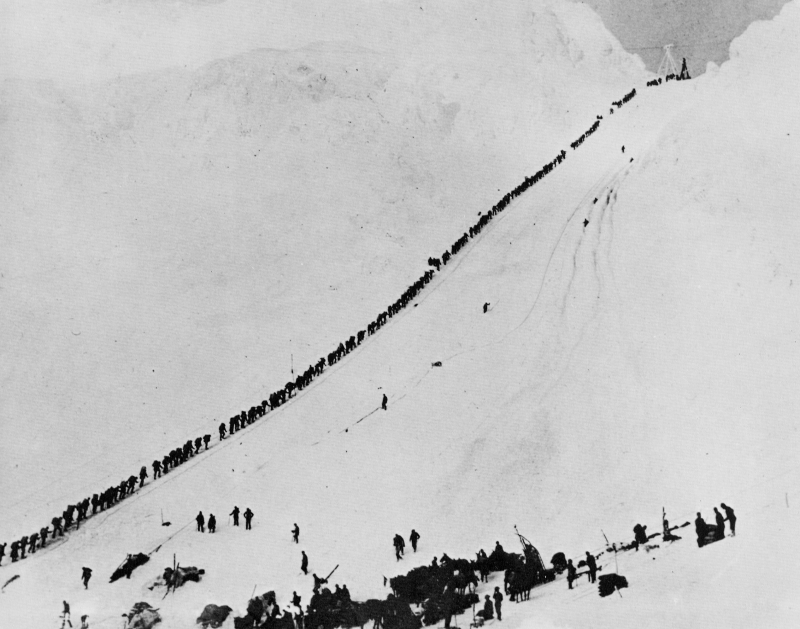 The 1,500 stairs carved out of the ice used by stampeders to carry their goods up to the Canadian border and the beginning of the long ride up the Yukon River to the gold fields in Dawson. In order to carry the two tons of supplies required by the Canadian Mounties, people had to climb the stairs several times, but enjoyed a quick ride sliding down the mountain in the grooved lanes to the right of the stairs.

During his five months in Alaska that year, Clum traveled over 8,000 miles and established post offices across the territory. Clum had been given the responsibility to create post offices and name postmasters as he saw fit. Clum carried everything he needed to create a post office with him -- postage stamps, mailbags, postal locks, keys and postmarking devices. By mid-August 1898 he had returned to Skagway, his mission complete.

The Klondike Gold Rush was a flash in the pan rush. Those who made money from the rush were the men and women who were already in the territory when gold was discovered, as well as the enterprising men and women who abandoned the gold fields and opened businesses in Dawson, Canada—the population center for the rush—making their fortunes off the stampeders. By 1899, word reached Dawson of a new gold strike, this time far west of the territory in Nome, AK. Before long, the teaming town of Dawson was reduced to a mere trickle and most of the post offices Clum christened along the trails from Skagway and Dyea into Canadian territory were history.

For more information on the life & times of John Clum before and after his Alaska adventure:
John Philip Clum, Gold Rush Postal Inspector

Postal Inspectors
Back to Top